Growing concerns over an ‘invasion’ of refugees and migrants helped to elect Donald Trump and sway Brexit voters. Yet the data suggest that the situation is very different from how it is often portrayed.

Researchers warn that misleading reports about the magnitude of flows into Europe and the United States are creating unjustified fears about refugees. That is undermining efforts to manage the massive humanitarian problems faced by those fleeing Syria and other hotspots. 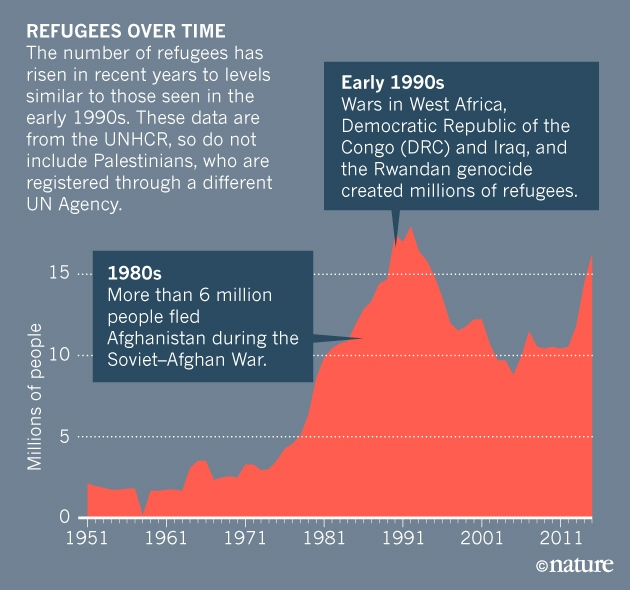 “The alleged increase in migration and forced displacement tells us more about the moral panic on migration than the reality,” says Nando Sigona, a social scientist at the University of Birmingham, UK.

The number of refugees and migrants entering the European Union is low compared with the bloc’s population. Nations in Africa and Asia are absorbing many more. “The number of refugees in Europe is a classic example of perception versus reality,” says geographer Nikola Sander at the University of Groningen in the Netherlands.

Experts also question assessments of the global situation. The UN refugee agency (UNHCR), declared in 2015 that the world was “witnessing the highest levels of displacement on record”. Around 40 million people were ‘internally displaced’ within their home countries. But researchers say that such estimates are often unreliable. 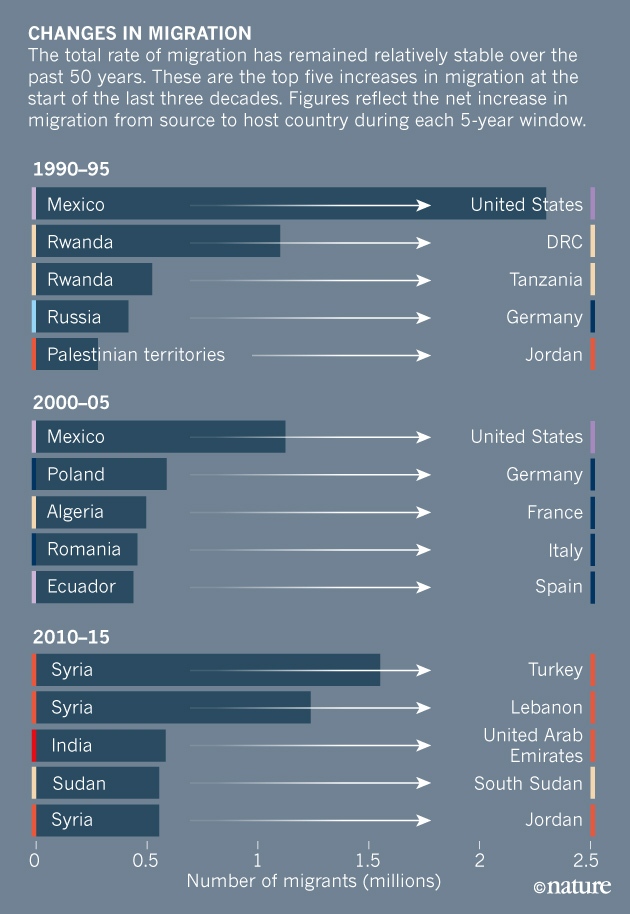 Refugee numbers are easier to track. The UNHCR estimates that there were 21.3 million refugees in 2015; that is only slightly higher than the 1992 figure of 20.6 million, when the global population was just two-thirds of today’s.

Researchers also warn about misinterpreting estimates of international migrants — those who move for economic or other reasons. These numbers can be problematic because the most widely cited UN figures are cumulative. Guy Abel, a statistician at the Vienna Institute of Demography, has studied the dynamic flow and found that the number of people migrating has remained stable over the past 50 years. His latest estimates indicate that migration rate, as a share of global population, has dropped to its lowest point in 50 years.

The data used to build this graphic can be downloaded as comma-separated values here: refugee-data-edit.csv.

INTERACTIVE: Where refugees are going

Most of the 21.3 million people who were refugees at the end of 2015 had fled conflicts in Africa and Asia. The vast majority sought refuge in neighbouring countries; only a small proportion headed to Europe or the United States. Just over half of refugees worldwide come from three countries, Syria, Afghanistan and Somalia.