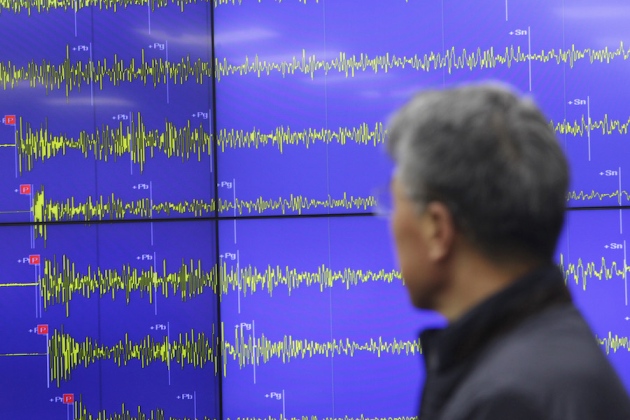 A South Korean official examines the seismic signature of a nuclear test from North Korea on 6 January.

Within hours of North Korea’s fourth nuclear test on 6 January, data pouring from seismic monitoring stations had shown that the explosion was almost certainly not a hydrogen bomb — contrary to claims made by the totalitarian, isolated state. Scientists are now relying on luck — and prevailing winds — to find out more about the design of North Korea’s device.

They hope that radioactive gases leaking from the underground explosion will be picked up by a global network of monitoring stations managed by the Preparatory Commission for the Comprehensive Nuclear-Test-Ban Treaty Organization (CTBTO), based in Vienna.

By comparing the ratios of various isotopes of xenon, an unreactive gas that can permeate the rock that sealed the blast, researchers might be able to determine whether the bomb was made from uranium or plutonium, and whether it was a conventional fission device, or a smaller, more-efficient "boosted" fission bomb.

But speed is of the essence: detectors would need to precisely measure xenon isotopes before some of the radioactive gases decay.

Not a hydrogen bomb

North Korea claimed to have produced a hydrogen bomb, but the small explosive yield of the blast probably rules that out. The seismic event it caused was estimated by the CTBTO at magnitude 4.85, much the same as the 2013 test. Its explosive yield is likely to have also been similar, at the equivalent of around 10 kilotonnes of TNT, says James Acton, who studies nuclear policy at the Carnegie Endowment for International Peace in Washington DC.

A hydrogen bomb would have created a blast hundreds or thousands of times more explosive. In this kind of bomb, energy released from a fission-based device is used to trigger a separate secondary nuclear fusion reaction, in which hydrogen isotopes fuse together, typically releasing energy equivalent to megatonnes of TNT.

But it is possible that by “hydrogen bomb”, North Korea was referring to a boosted fission device that contains hydrogen, Acton says. This is a conventional fission bomb that contains a small quantity of the hydrogen isotopes tritium and deuterium, which fuse to release extra neutrons that greatly boost the fission reaction and explosive yield.

Experts have speculated for years that North Korea might be working on such a device. Boosted devices are smaller yet can be just as powerful as fission bombs, making them more suitable for use in missile warheads. The research involved in developing them is also a step along the way to developing thermonuclear weapons.

Xenon isotope ratios might be able to help determine whether the device was boosted in this way, says Hugh Chalmers, a senior researcher at VERTIC (the Verification Research, Training and Information Centre), a non-profit organization in London.

“If the test device was boosted, it would have consumed much more of its fission fuel than if it hadn’t,” he says. “If states can get strong and accurate measurements of fission products released from the test, the isotopic ratios may provide clues as to how efficiently the fission fuel was burnt, and whether this fuel was consistent or inconsistent with a boosted device".

Those ratios could also reveal whether North Korea’s weapon was made of uranium or plutonium. Past bombs are believed to have been built using the country's limited domestic supply of plutonium; North Korea is widely suspected of having a uranium-enrichment programme, but that hasn’t yet been proved.

But xenon isotopes must be detected quickly and in sufficient amounts to distinguish them from the signals generated by sources such as civilian nuclear-power reactors. As time passes that gets harder: some isotopes decay very rapidly. The half-life of one isotope called xenon-133m, needed to pin down the type of weapon detonated, is just 2.2 days.

Although the CTBTO detected xenon two weeks after North Korea’s first test in 2006, it detected none after the country’s 2009 test, and only spotted xenon more than a month after a third nuclear test in 2013. That was too late for useful forensics.

And as the radioactive gases are transported through rocks and air, adds the CTBTO’s Martin Kalinowski, some isotopes of xenon become more enriched than others. This can blur the signatures of the original explosion.

Without other sources of intelligence, the chances of reliably determining what kind of nuclear weapon North Korea did detonate are low, he thinks.