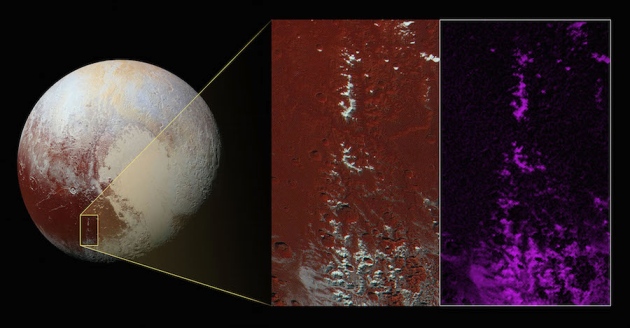 The plains of Pluto’s Sputnik Planum look smooth and fresh after 4 billion years in the deep freeze of the outer Solar System. Yet nearby highlands are saturated with impact craters. Welcome to weird and wonderful Pluto, as revealed by NASA’s New Horizons spacecraft.

Eight months after the probe buzzed past the dwarf planet, mission scientists have published the most detailed studies yet of Pluto’s unexpectedly varied terrain and its motley moons. “It’s truly amazing how many different geological processes have operated” on Pluto, says Jeffrey Moore, a planetary scientist at NASA’s Ames Research Center in Moffett Field, California, and the lead author of one of five New Horizons papers published today in Science1–5.

On Sputnik Planum, nitrogen, methane and carbon monoxide continually cycle between ice and gas at temperatures of −243 to −223 ºC. Sputnik Planum's elevation, 3–4 kilometres below the surrounding uplands, may create conditions that collect these volatile chemicals from Pluto's thin atmosphere.

The result is soft glaciers, composed largely of nitrogen ice, that cover a bedrock of much harder water ice and help to keep the plains smooth. Yet this water ice is less dense than the nitrogen, so in some places, chunks of the bedrock float on the glaciers.

Other areas remain in an almost primordial state. The eastern part of the dark area called Cthulhu Regio seems to be saturated with craters. Moore suspects that they were created during the Late Heavy Bombardment 4 billion years ago, when comets and asteroids pummelled the Solar System. 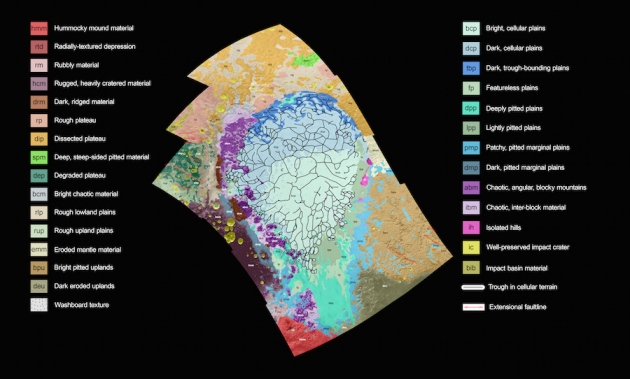 Going with the flow

The combination of light, strong water-ice bedrock and softer, flowing glaciers made of about 90% nitrogen creates some strange interactions. Scientists did not think that soft volatile ices could build water ice into mountains several kilometres high — until they saw Pluto up close. “When you lay out all these materials in a large sandbox, weird and wonderful things can happen,” says New Horizons team member Will Grundy, of Lowell Observatory in Flagstaff, Arizona, the lead author of a study describing the surfaces of Pluto and Charon3.

Other geological oddities arise at the boundaries between different types of terrain. Some highlands near Sputnik Planum are marked by valleys about a kilometre deep, and up to 25 kilometres wide, where glaciers seem to run down to the plains below. The networks of valleys resemble those found on Mars and Saturn’s moon Titan. This surprises Moore, because conditions on Pluto prevent nitrogen from existing as a fluid that could carve such valleys. Scientists aren't sure whether heavy nitrogen ice eroded the lighter water ice to create the depressions.

Then there is Pluto’s largest moon, Charon. Mordor Macula, a large, reddish region near the moon’s north pole, does not resemble anything found on the other known icy satellites in the Solar System. Grundy and his colleagues suggest that its striking colour is produced by methane and other volatile chemicals that freeze out of the atmosphere during Charon's long winters — when temperatures can dip below −253 ºC — and are then converted by sunlight into darker compounds that do not evaporate. The source of the methane is unknown; it may escape from Pluto's atmosphere and flow toward Charon, or come from Charon's interior.

Taken together, the findings constitute “a magnificent reconnaissance” of Pluto and its satellites, says Ralph Lorenz, a planetary scientist at the Johns Hopkins University Applied Physics Laboratory in Laurel, Maryland, who is not involved in the New Horizons mission. “The iceberg mountains floating in a frozen sea of nitrogen and the bladed terrain are just examples of a quite amazing range of novel features.”