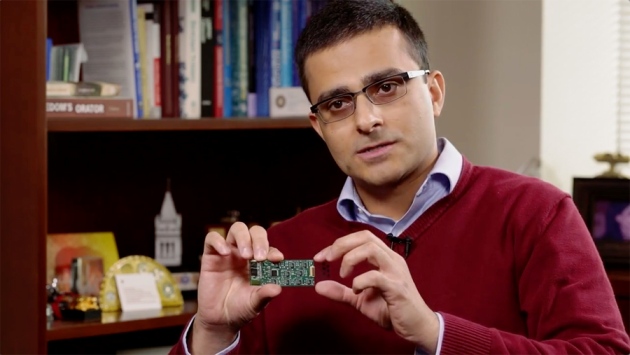 Ali Javey, of the University of California, Berkeley, shows the flexible, wearable sweat-sensing device his team has created.

Materials scientists have created a small, wearable sensor that can read the molecular composition of sweat and send its results in real time to a smartphone. The flexible plastic patches — which can be incorporated into wristbands and headbands — may be able to provide early warning of changes in the body, say their creators.

“The idea is to have this thumbs-up or thumbs-down device that will give real-time information: it could provide an alarm that you need to take some medication, or that you’re getting dehydrated and need to drink some water,” says Ali Javey, at the University of California, Berkeley, who helped to develop the sensors. He and his colleagues report their work in Nature1.

The inside story on wearable electronics

Several labs have been developing sensors for sweat, which contains a multitude of electrolytes and metabolites — the final products of the body’s biological processes (for example, the lactic acid that builds up after exercise). But these sensors have tended to measure only one component of sweat at a time, and generally cannot transmit their measurements in real-time.

“Until now, sweat sensors have typically involved patches that are removed for subsequent chemical analysis by separate, non-wearable machines,” says John Rogers at the University of Illinois at Urbana–Champaign, who is also developing wearable electronics.  “The current device is wearable, it provides continuous data streams, and it measures multiple biomarkers simultaneously.”

Perspiration on your phone

Putting together existing advances in wearables technology, Javey’s team made the sensors from a flexible electronics board joined to a flexible printed plastic sensor array, which can detect glucose, lactate, sodium, potassium and body temperature. When the sensors come into contact with sweat they generate electrical signals that are amplified and filtered, and then calibrated using skin temperature. This step is essential, says Javey: “Electrochemical sensors are very sensitive to temperature, and skin temperature can vary quite a bit when we are sweating.” The data are then wirelessly transmitted to a smartphone.

It’s an impressive achievement, says Jason Heikenfeld at the University of Cincinnati in Ohio, whose lab has also been developing wearable sweat sensors. “The sensors typically require electronics that are normally the size of a shoebox; they miniaturized them into something that can wrap around your wrist,” he says. The sensors have to be fabricated from basic chemicals in the laboratory, and cannot be purchased off the shelf like sensors found in today’s wearables, which measure heart rate and detect the body's motion.

Javey says he has applied for patents on the technology. But there are still many challenges to overcome before you can expect to buy a sweat sensor incorporated into a wearable fitness band. For one thing, scientists aren’t used to working with such tiny quantities of fluid, and people aren’t always sweating. “Many applications will be outside athletics, where wearable bands or patches will have to locally stimulate sweat,” says Heikenfeld. 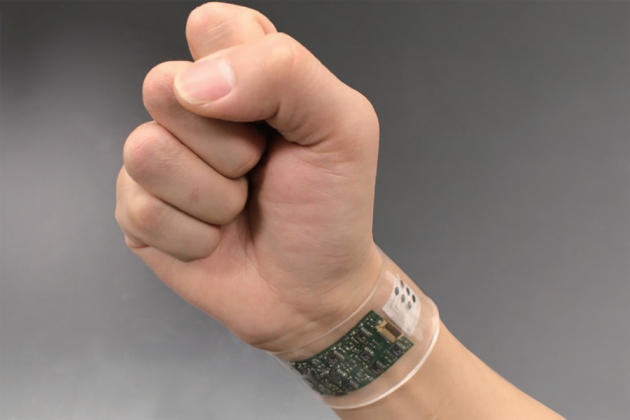 The sweat sensor in a prototype flexible plastic wristband.

Sweat sensors will never be as accurate as blood tests, which are the “gold standard”, says Javey. Our bodies closely control the molecular composition of our blood, but the content of our sweat is more variable and is sometimes influenced by microbes on our skin — so the medical relevance of the information that sweat provides will need to be rigorously tested. However, sweat does have an advantage: taking blood samples with a needle is not a practical means of assessing health on a minute-by-minute basis.

In time, the researchers hope to incorporate more sensors that might provide an even deeper picture of what’s happening in the body. “We want to develop medical applications,” Javey says. He points to research suggesting that certain biomarkers in sweat may correlate with symptoms in people with depression2. “By looking at those other chemicals we may be able to get information about the mental health of an individual,” he says.