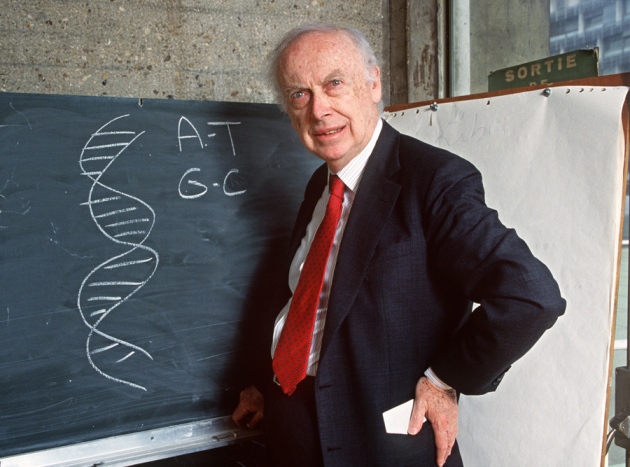 James Watson helped to discover the helical structure of DNA.

James Watson, the molecular biologist who has become nearly as famous for his unfiltered, off-colour remarks as for his role in the discovery of the double-helix structure of DNA, has achieved another scientific milestone. On 4 December, he became the first living scientist to auction his Nobel Prize medal to the highest bidder.

The anonymous buyer paid US$4.76 million, including the buyer's premium that goes to the auction house, participating by phone in the sale held at Christie's auction house in New York City. That is the highest price ever paid for a Nobel medal, far outstripping predictions that Watson's prize would sell for $2.5 million to $3.5 million.

The sale comes more than a year after the family of Francis Crick, who shared in the 1962 Nobel Prize in Physiology or Medicine with Watson, sold his medal for $2.27 million. "I'm very pleased," Watson said after the auction. "I wanted to be at least equal to Crick, but this exceeded his."

Whereas Crick remained a relatively private person until his death in 2004, Watson is a notorious rabble-rouser who is not shy about voicing his views on race and gender. 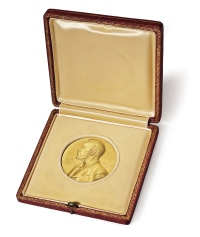 In 2007, he was suspended from his post as chancellor of the Cold Spring Harbor Laboratory in Long Island, New York, after controversy erupted over his suggestion to The Sunday Times that black people are not as intelligent as white. "Our wanting to reserve equal powers of reason as some universal heritage of humanity will not be enough to make it so," he said. Watson retired from the laboratory shortly after.

Watson told Nature that his motivation for selling the medal is a chance for redemption. He plans to donate some of the proceeds to Cold Spring, where he still draws a $375,000 base salary as chancellor emeritus, and also to University College Cork in Ireland to help establish an institute dedicated to the mathematician George Boole. "I'm 52% Irish," Watson said by way of explanation.

He previously told the Financial Times, perhaps in jest, that he might also buy himself a David Hockney painting.

In addition to the medal, Watson also auctioned off notes from his Nobel acceptance speech — scribbled on stationery from the Grand Hotel in Stockholm — and lecture. The speech sold for $365,000 and the lecture for $245,000.

After the auction concluded, the 86-year-old Watson ambled to the front of the room as friends and colleagues snapped photographs. Watson's Nobel medal was removed from a white lacquer case and placed in his hands one last time.

"That's not yours anymore," someone shouted at him. No — but he does have a replica at his home.

A previous version of this story stated that Watson's medal sold for $4.76 million. In fact, this included the buyer's premium — the hammer price was $4.1 million. This has now been clarified. In addition, Watson was not fired from his long-term post as chancellor of the Cold Spring Harbor Laboratory, he retired from the position he had held since 2003, after being at the laboratory for several decades.