What is the solution to science’s broken postdoctoral system? According to a poll answered by 20,000 Nature readers, the answer is clear: postdocs need permanent, better-paid staff-scientist positions. But investigators who have already tried offering the jobs say that the change would mean downsizing their laboratories. 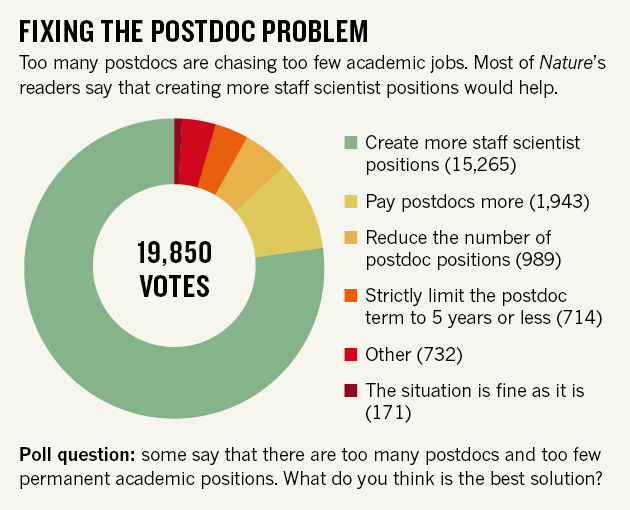 The number of postdoctoral fellows has swelled dramatically across the globe over the past two decades, whereas the number of permanent tenure-track positions has either plateaued or in some areas is in decline. The resulting employment bottleneck has meant that young researchers are spending longer as postdocs, sometimes leaving academia or science altogether after extensive training.

A 2014 report from the United States National Academies in Washington DC recommended blending a number of strategies to reverse the surplus. The approach includes limiting the number of postdoc positions and the length of postdoc terms, increasing pay and creating more staff-scientist positions for those who cannot or do not wish to run their own lab.

To accompany a feature on the postdoc problem this week, Nature ran a poll in which respondents could choose only one of those options. In the past three days, around 20,000 readers (half of whom voted from the United States or United Kingdom) have responded. A whopping 77% voted for the staff-scientist solution. Just under 10% voted for higher pay for current postdocs, and less than 1% think that the situation is fine as it is. Around half of the 4% who offered their own, ‘other’, solution suggested limiting the number of PhD holders entering the postdoc pipeline. Some suggested combining all proposed ideas.

“Many postdocs are, in essence, already doing staff-scientist positions without the benefits that go with those positions,” says Paula Stephan, an economist at Georgia State University in Atlanta, who served on the committee that wrote the 2014 National Academies report. She says the poll results indicate that many postdocs would like to have such positions and, presumably, that at least some investigators would be happy to hire them. “The big question here is, how are we going to pay for it?”

Staff-scientist positions typically pay more than double the salary of a postdoc, and also bring long-term productivity and mentoring to research groups. Some private research institutes and government labs in the United States already hire substantial numbers of senior staff scientists. But for many academic researchers, the costs of hiring staff scientists are unsustainable or would require them to downsize their lab. "The only way to pay for restructuring labs is to have fewer postdocs and graduate students," says Stephan.

Investigators who would like to hire more permanent staff have struggled with the finances. Anne Carpenter, a computational biologist at the Broad Institute in Cambridge, Massachusetts, set up her lab in 2007 and planned a group consisting of one postdoc and nine staff scientists, which she thought would maximize efficiency and productivity. But paying that many computational biologists in the Boston area would result in US$1 million in paid salaries alone, she says. “I can’t make it work.”

Although Carpenter was unable to realize her ideal lab structure, she thinks that individual investigators should move in that direction. “Principal investigators can think about converting one position to a more permanent staff position. That would help this shift.”