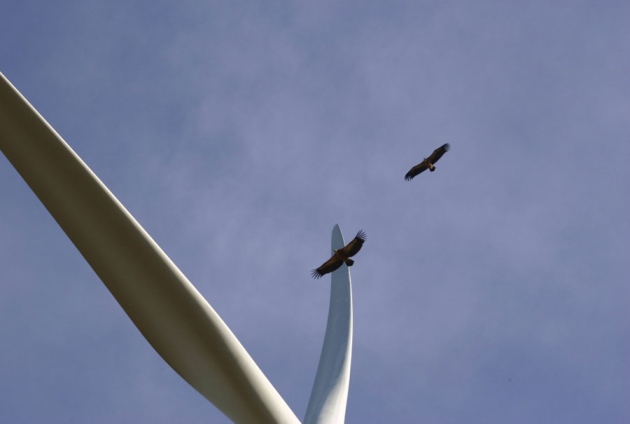 Vultures may collide with the blades of wind turbines because of blind spots in their visual field.

Vultures have such large blind spots in their visual field that they cannot see objects directly in front of them when they fly. This discovery explains why vultures frequently collide with conspicuous structures such as wind turbines and power lines, despite having some of the sharpest eyes of any animal.

This means that making wind turbines more conspicuous will do little to reduce collisions. “You can paint them with bright stripes or hang things off them, but that won’t be effective,” says Graham Martin, an ornithologist at the University of Birmingham, UK, who led the study published this week in the journal Ibis1. “You’ve got to keep the birds and the turbines apart.”

Working with Steven Portugal from the Royal Veterinary College in Hertfordshire and Campbell Murn from the Hawk Conservancy Trust in Hampshire, UK, Martin measured the visual fields of griffon vultures (Gyps fulvus) and African white-backed vultures (Gyps africanus). “I used the same device that an optician would use when you get an eye test,” he says. “These are big birds with big beaks. I did lose a bit of my thumb.”

“These are big birds with big beaks. I did lose a bit of my thumb.”

The researchers found that vultures have large visual fields that give comprehensive coverage of the ground ahead and the sky on either side, allowing them to scan for food while observing other vultures. But they have large blind spots above and below their heads. When they fly, they tilt their heads downwards, so that the space directly in front of them becomes a blind area.

Martin thinks that these blind spots allow vultures to soar without being dazzled by the Sun. “If you’ve evolved an eye with high acuity, you don’t want to constantly expose yourself to something that’s going to reduce it,” he says. Large eyes are most vulnerable to this problem, and Martin has found that big birds such as bustards and cranes share the same blind spots, whereas smaller ones such as pigeons, ducks and herons do not.

“The obvious solution is to move your head,” says Nathan Hart, who studies visual neuroscience at the University of Western Australia in Crawley. “I’d be amazed if vultures do not do this periodically while flying, to build a visual map.”

But Martin argues that vultures would need to turn their heads a long way to accomplish this. “We’ve looked at a lot of film and Campbell [Murn] flies regularly with the birds” using a lightweight aeroplane, he says. “We’re confident that the vultures don’t typically make such exaggerated head movements while foraging.”

These adaptations became a problem only when humans erected large objects in the vultures’ way. “Across Africa and southern Europe, vultures have become frequent casualties of collisions with wind farms,” says Portugal. “It’s an innate behavioural trait that is causing the problem. The speed of the rotating blade doesn’t help.”

“If you’ve got an area where these birds are coming through, you need to distract them away,” says Martin. This could be done by creating feeding stations, or ‘vulture restaurants’, away from wind farms1.

Manuela de Lucas, who studies ethology and biodiversity conservation at Doñana Biological Station in Seville, Spain, commends the study, but she has found that vultures crash into some wind turbines but not others2. “Other factors such as small-scale topography and weather conditions must also be involved in bird mortality,” she says.

In southern Spain, de Lucas has tested a system that uses automated radar devices to temporarily stop wind turbines when vultures pass through. The system halved the number of collisions but cost the farms just 0.07% of their production2. Martin praises the approach. “The power companies are keen to cooperate, because you don’t need to turn the blades off very long and the birds prefer to fly on relatively windless days,” he says.

Martin and his team now want to study the visual fields of other raptors such as hawks, falcons and eagles. “We predict that species that forage like vultures, by looking down, would have the same problem, and species that hunt in forests would not,” says Portugal. “Anecdotal evidence would appear to support this idea.”