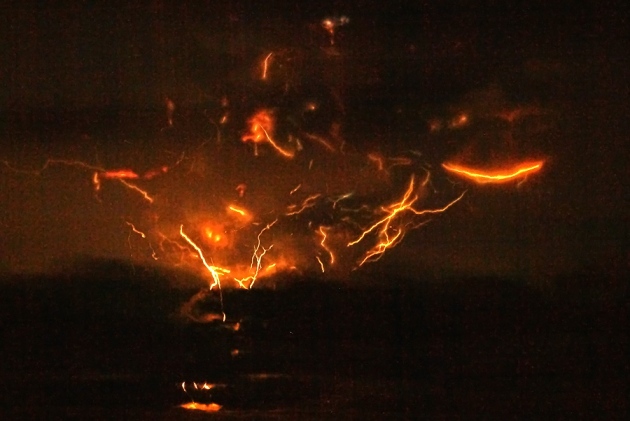 Volcanic lightning during the 2009 eruption of Alaska's Mount Redoubt enabled researchers to study electrical processes within the ash plume.

Volcanic eruptions can spark squalls of lightning that are as intense as the biggest superstorms over the central United States, according to researchers who have captured the most detailed measurements of electrical discharges during a volcanic blast. The data, they say, could help to illuminate what causes volcanic lightning and point the way towards a system that can quickly detect ash plumes from remote eruptions, which can disrupt air travel.

Observers as far back as Pliny the Elder in 79 AD have noted that eruptions often trigger lightning storms, but researchers have only recently started to set up monitoring stations to capture that electrical activity and study its causes. In early 2009, seismic rumblings beneath Alaska’s Mount Redoubt provided an opportunity for a team from the New Mexico Institute of Mining and Technology in Socorro and the University of Alaska in Fairbanks. They raced to the mountain and set up four small monitoring stations with very high frequency (VHF) antennas to record the radiation from any lightning discharges. Two months later, Mount Redoubt erupted and the team was deluged with data.

“We had 16 large volcanic lighting storms, so that was a lot of data to compare between the different eruptions,” says Sonja Behnke, a graduate student at the New Mexico institute and first author on a paper about the eruption in the geophysics publication EOS this week1.

The researchers found that the amount of lightning correlated with the height of the plume, something they could not test using more limited data collected during an eruption at Alaska’s Mount St Augustine in 2006. This observation is important, says Behnke, because systems to monitor lightning could provide an estimate for the size of an eruption, which is not always easy to assess for remote volcanoes.

During a previous eruption at Mount Redoubt in 1989 and 1990, for example, the size of the plume wasn’t known and a plane nearly crashed after passing through the ash cloud and temporarily losing all power from its engines. Behnke and her colleagues suggest that VHF stations similar to the ones they installed at Mount Redoubt could be used to monitor volcanoes to give early warning of an eruption and an estimate of its size.

The readings can also help researchers to determine how volcanic clouds become electrified through processes that separate negative and positive charges in different regions of the cloud. As in previous eruptions, the team found two different types of volcanic lightning: small bursts right at the mouth of the vent and much larger discharges higher up in the ash plume. The two may have different origins, says Behnke. The small bursts seem to stem from an electrification process that happens when the magma is emerging from the vent and breaking into small particles. But the lightning in the plume could relate to the freezing of water, which is thought to electrify clouds in thunderstorms.

Support for the freezing hypothesis came from a team of Icelandic and British researchers, who studied the 2010 eruption of the Icelandic volcano Eyjafjallajökull. They found that the lightning in the plume only occurs when the temperature at the top of the ash cloud dips below –20 ºC. This is the temperature at which supercooled water droplets in the atmosphere freeze, says Alec Bennett, an atmospheric physicist who participated in the study while working at the UK Meteorological Office in Exeter, UK2.

The Met Office uses a different approach to monitoring lightning: a network of stations centred mainly in Europe that record very low frequency radio waves. The advantage of that system, says Bennett, is that it can detect lightning from eruptions more than 10,000 kilometres away, whereas the VHF system must be within sight of the volcano. But the VHF system has much better resolution and can pick up weaker lightning discharges, explains Bennett, who now works for Biral, a company in Bristol, UK, that makes atmospheric sensors.

He suggests combining both VHF and low-frequency sensors to monitor lightning and provide quick warning of dangerous ash clouds. “That would be the best of both worlds,” Bennett says.