The waters of the African lake seem calm and peaceful. A few migrant swallows flit near the surface. Suddenly, leaping from the water, a fish grabs one of the famously speedy birds straight out of the air.

“The whole action of jumping and catching the swallow in flight happens so incredibly quickly that after we first saw it, it took all of us a while to really fully comprehend what we had just seen,” says Nico Smit, director of the Unit for Environmental Sciences and Management at North-West University in Potchefstroom, South Africa.

After the images did sink in, he adds, “the first reaction was one of pure joy, because we realized that we were spectators to something really incredible and unique”. 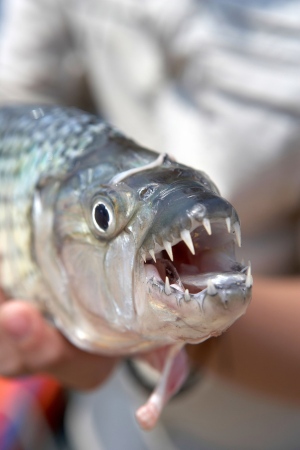 An African tigerfish caught on the Lower Zambezi River.

This is the first confirmed record of a freshwater fish preying on birds in flight, the team reports in the Journal of Fish Biology1. Rumours of such behaviour by the African tigerfish (Hydrocynus vittatus), which has been reported as reaching one metre in length, have circulated since the 1940s. But Smit says that his team was “never really convinced by the anecdotal reports”. So, when they set out to study of the migration and habitat use of these animals in a South African lake in the Mapungubwe National Park, near the border with Botswana and Zimbabwe, they were not necessarily looking for fish flying out of the water.

Nevertheless, during their time at the lake, the researchers saw as many as 20 successful fish strikes on barn swallows (Hirundo rustica) every day. These ranged from pursuits by fish at the surface, followed by leaps, to direct attacks from deeper water.

Smit says that this remarkable behaviour has been under the radar until now because the study of freshwater fish in Africa is very limited. “We hope that our findings will really focus the attention on the importance of basic freshwater research, and specifically fish behaviour,” he adds.