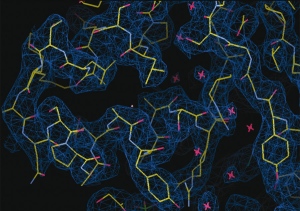 An enzyme designed by players of the protein-folding game Foldit was better than anything scientists could come up with.

Obsessive gamers’ hours at the computer have now topped scientists’ efforts to improve a model enzyme, in what researchers say is the first crowdsourced redesign of a protein.

The online game Foldit, developed by teams led by Zoran Popovic, director of the Center for Game Science, and biochemist David Baker, both at the University of Washington in Seattle, allows players to fiddle at folding proteins on their home computers in search of the best-scoring (lowest-energy) configurations.

The researchers have previously reported successes by Foldit players in folding proteins1, but the latest work moves into the realm of protein design, a more open-ended problem. By posing a series of puzzles to Foldit players and then testing variations on the players’ best designs in the lab, researchers have created an enzyme with more than 18-fold higher activity than the original. The work is published today in Nature Biotechnology2.

“I worked for two years to make these enzymes better and I couldn’t do it,” says Justin Siegel, a post-doctoral researcher working in biophysics in Baker’s group. “Foldit players were able to make a large jump in structural space and I still don’t fully understand how they did it.”

The project has progressed from volunteers donating their computers' spare processing power for protein-structure research, to actively predicting protein structures, and now to designing new proteins. The game has 240,000 registered players, 2,200 of whom were active last week.

The latest effort involved an enzyme that catalyses one of a family of workhorse reactions in synthetic chemistry called Diels-Alder reactions. Members of this huge family of reactions are used throughout industry to synthesise everything from drugs to pesticides, but enzymes that catalyse Diels-Alder reactions have been elusive. In 2010, Baker and his team reported that they had designed a functional Diels–Alderase computationally from scratch3, but, says Baker, “it wasn’t such a good enzyme”. The binding pocket for the pair of reactants was too open and activity was low. After their attempts to improve the enzyme plateaued, the team turned to Foldit.

In one puzzle, the researchers asked users to remodel one of four amino-acid loops on the enzyme to increase contact with the reactants. In another puzzle, players were asked for a design that would stabilize the new loop. The researchers got back nearly 70,000 designs for the first puzzle and 110,000 for the second, then synthesized a number of test enzymes based on the best designs, ultimately resulting in the final, 18-fold-more-active enzyme.

“It’s a refreshing twist on enzyme engineering,” says Stefan Lutz, a chemist at Emory University in Atlanta, Georgia, who was not involved in the research. “Using the Foldit players allows the researchers to use human intuition at a scale that is unprecedented.”

Foldit allows people to explore more drastic changes to the protein than are possible using standard methods such as directed evolution — in which a large pool of randomly mutated enzymes is screened for mutants that improve the original. These mutations are typically just amino-acid substitutions, not the 13-amino-acid addition the players came up with. Systematically testing a change of that size would require testing astronomical numbers of proteins.

“You can explore things that look crazy. When we first saw this particular design we thought it looked crazy,” says Donald Hilvert, a biochemist at the Swiss Federal Institute of Technology in Zurich, who is collaborating with the researchers to further refine the protein through directed evolution.

There are no immediate applications for the particular Diels-Alder reaction that this enzyme catalyses, and, compared with naturally occurring enzymes that catalyze other reactions, it's not very active. But it marks a milestone in showing what crowdsourcing research can achieve.

Baker is now looking toward more useful targets. The team reported last year that they had designed small protein inhibitors that bind to and block the 1918 pandemic influenza virus4. “Now Foldit players are working to make more potent inhibitors,” Baker said. “Those are exciting because those could be drugs.”