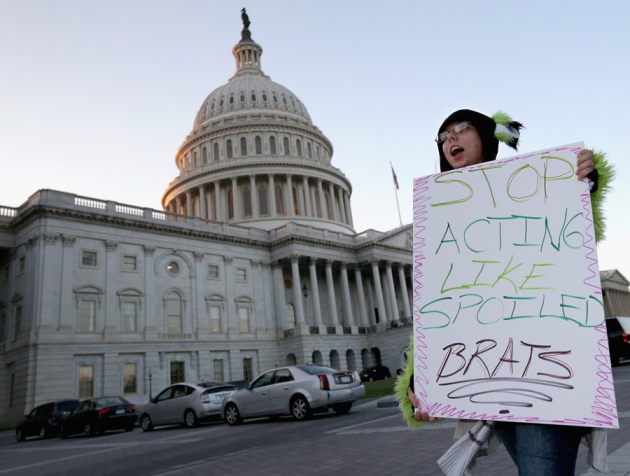 A protester in Washington DC harangues members of Congress over their failure to pass the next budget.

The US government entered a state of suspended animation on 1 October after Congress failed to agree on a budget for the next fiscal year, causing federal agencies — including those overseeing science policy and research — to shut down indefinitely.

Most government scientists were ordered to stay at home, their offices and labs closed or run by a skeleton staff of ‘essential’ workers. The National Institutes of Health (NIH) and the National Science Foundation (NSF) stopped processing grants, some government websites were made inaccessible and many important research programmes were left hanging, potentially putting lives at risk in the case of some disease studies. Use of government telephones and e-mail was also suspended. The restrictions were still in place as Nature went to press.

The shutdown is the product of fierce political infighting in Congress, and comes as a cruel blow to researchers who were already struggling with successive rounds of federal cuts — including the 5.1% across-the-board ‘sequestration’ that took effect on 1 March.

“This is ridiculous,” says Jennifer Zeitzer, director of legislative affairs at the Federation of American Societies for Experimental Biology in Washington DC. “We can’t continue to survive as a research community this way.”

At the NIH, headquartered in Bethesda, Maryland, 73% of the agency’s 18,646 employees were immediately placed on furlough, or enforced leave. The agency also stopped accepting patients for its clinical trials or initiating new studies. Minimal staff remain to care for lab animals and to protect NIH facilities.

The NSF, in Arlington, Virginia, ordered 98.5% of its roughly 2,000 employees to stay at home. One notable exception was staff in the Division of Polar Programs, which oversees the agency’s trio of Antarctic research stations and its remote facilities in Greenland.

The National Oceanic and Atmospheric Administration (NOAA), based in Washington DC, retained almost 5,400 of its 12,000 employees, largely to support the essential work of the National Weather Service. Most of its scientists were put on leave, with some exceptions; for example, roughly a dozen people will stay on to maintain the agency’s six greenhouse-gas monitoring stations, including sites in Hawaii, Alaska, Greenland and Antarctica. But the team of scientists in Boulder, Colorado, that analyses the data collected by those stations has been told to stay at home, even as flasks of air samples shipped from NOAA field sites begin to pile up.

Pieter Tans, who heads NOAA’s Carbon Cycle and Greenhouse Gases group in Boulder, was planning to bring work home to help occupy him during the shutdown, because he would be unable to access agency computers or his work e-mail. “I’ll be busy, but you bet I’m angry,” he said, hours before the government began winding down its operations. Tans said that he and his colleagues are treating the shutdown with a sense of resignation after several years of uncertain budgets. “In ten years, our programme will be totally gutted if this continues.”

Some agencies are more fortunate. The Food and Drug Administration (FDA) in Silver Spring, Maryland, receives substantial user fees from the pharmaceutical industry that fund an estimated two-thirds of its drug-review process. Although the FDA has put 45% of its staff on leave and will cut back on food-safety programmes, user fees might keep its drug-review pipeline open — albeit operating more slowly than normal, says Timothy Coté, founder of Coté Orphan Consulting in Silver Spring and a former director of the FDA’s Office of Orphan Products Development.

But a lingering shutdown would have knock-on effects. For instance, if the NSF misses one or two weekly payments to the National Radio Astronomy Observatory in Charlottesville, Virginia, the facility would be forced to close, disrupting long-term research, says facility director Tony Beasley.

At NASA, one casualty could be the Mars Atmosphere and Volatile Evolution (MAVEN) mission, which until 1 October was being prepared at Cape Canaveral in Florida for an 18 November launch. MAVEN’s principal investigator, Bruce Jakosky of the University of Colorado Boulder, says that his team can accommodate a brief work stoppage. But if MAVEN, which will study the Martian atmosphere, misses its three-week launch window, it will be delayed until 2016, when Mars and Earth will again be favourably positioned in their orbits. Under NASA’s contingency plans, operational missions, such as work on board the International Space Station, will continue.

Meanwhile, the shutdown forced the Centers for Disease Control and Prevention in Atlanta, Georgia, to halt its tracking of influenza cases just when the US flu season normally begins. The agency will also cut back on surveillance of emerging infectious diseases such as the Middle East respiratory syndrome coronavirus, says spokeswoman Barbara Reynolds. The Environmental Protection Agency has retained some staff to look after its environmental-health and security functions and to care for animals being used in studies.

Predicting when and how the shutdown might end is difficult. The last such event, in early 1996, continued for a record 21 days, although shutdowns have historically been much shorter. The latest dispute is rooted in attempts by the Republican-controlled House of Representatives to withhold funding for the health-care reform programme championed by President Barack Obama. The Democrat-controlled Senate has repeatedly rejected the House manoeuvres, with little sign that the two bodies are willing to compromise.