The US Environmental Protection Agency (EPA) has missed a self-imposed deadline to release recommendations for the regulation of dioxins. The 31 January cut-off was part of a reassessment process that has stretched out for 20 years, but the agency has promised to finalize its guidelines “as expeditiously as possible”, although it gave no new deadline.

In most skirmishes over the regulation of toxic chemicals, environmental scientists find themselves at odds with industry lobbyists. But both camps are fuming that it has taken so long for the EPA to come up with scientifically sound recommendations for dioxin intake. The assessment is not legally-binding, and the recommendations are used to guide policy-makers. 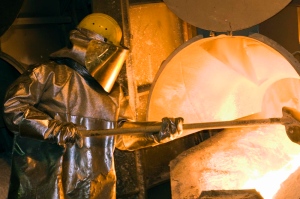 Copper smelting is a common source of exposure to dioxins, which can cause cancer.

Dioxins include about 30 chemicals that can disrupt hormonal pathways, cause reproductive and developmental problems and lead to cancers, such as 2,3,7,8-tetrachlorodibenzo-p-dioxin, found in the infamous Agent Orange herbicide deployed during the Vietnam War. Most dioxin exposure in the United States is attributable to emissions from waste incinerators, copper smelters and makers of paper pulp. Regulations have curtailed dioxin emissions by 90% since the 1980s, but the pollutants persist in the environment, so they continue to contaminate livestock forage and meat and dairy products.

The EPA published its first assessment of dioxins as a guideline for US consumers and policy-makers in 1985. In 1991, the agency launched a reassessment to resolve outstanding issues and incorporate new data. However, the agency’s Scientific Advisory Board warned that a 1994 draft report had a “tendency to overstate the possibility of danger” and did not adequately spell out scientific uncertainties. Soon afterwards, James Tozzi, a lobbyist who had founded the Center for Regulatory Effectiveness watchdog in Washington DC, sued to block the reassessment because he did not think it was based on sound science. As part of a settlement, the US National Academies of Science reviewed the EPA's report, publishing Health Risks from Dioxin and Related Compounds: Evaluation of the EPA Reassessment in 2006, which echoed the concerns of the advisory board.

The EPA published a further draft of its reassessment in 2010, recommending that people consume less than 0.7 picograms (less than one trillionth of a gram) of dioxins per kilogram of body weight per day. This is lower than the World Health Organization's daily limit of roughly 2.3 picograms per kilogram; in the United States, people currently consume an average of less than 0.5–3 picograms per kilogram per day. The EPA's strict recommendation has been lauded by cancer-awareness groups and environmentalists, but chemical and agricultural industries are protesting, arguing that although it is not legally binding, the lower limit could alarm consumers unnecessarily.

The scientists who prepared the National Academies review say that the EPA is still being too cautious. For example, the agency used the upper limit of a confidence boundary to estimate the slope of a dose–response curve, and discarded the lower bound. “The agency has put their thumb on the scale to err on the side of safety,” says Joshua Cohen, deputy director of the Center for the Evaluation of Value and Risk in Health at Tufts Medical Center in Boston, Massachusetts, who served on the National Academies panel. “We need to balance the benefits and the costs” of stricter guidelines, he says.

Cohen and other scientists agree with the EPA that high doses of dioxins pose a real risk. But they contend that it is inaccurate to extrapolate down to the low doses to which the general public is exposed, and to relate animal studies to human health.

Latisha Petteway, press officer for the EPA, says “it would be difficult to comment” on the criticism “since we do not know what the findings of the assessment will be”.

Arnold Schecter, an epidemiologist at the University of Texas School of Health in Dallas, defends the agency’s work on dioxins, but says that the reassessment should have been published 10 years ago, and updated as needed. “This is not the ten commandments,” he says. “This is laboratory science.”

The dioxin saga has had broader ramifications for the regulation of toxic chemicals and the researchers studying them. A law passed as part of a spending bill last year requires any draft assessments finalized by the EPA in 2012 to undergo review by the National Academies of Sciences, although it is unclear whether this applies to the dioxin reassessment.

David Eaton, a toxicologist at the University of Washington School of Public Health in Seattle and chairman of the National Academies’ dioxin evaluation, says that such mandatory reviews are a bad idea, as it is expensive and duplicates the work of the EPA's own science advisors. “The National Academies do a pretty good job, but I hate to see them become the de facto sounding board for everything that EPA does.”