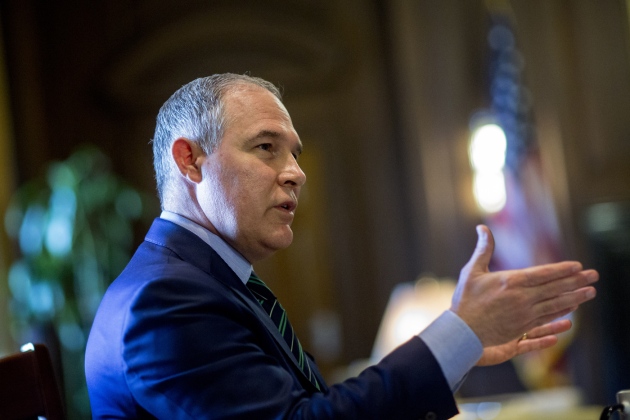 EPA administrator Scott Pruitt is poised to reshape the mix of experts that advise his agency.

In crafting the policy, EPA administrator Scott Pruitt sided with his agency’s most vociferous critics, who claim that EPA science panels are stacked with scientists who are biased in favour of the agency’s regulatory agenda. The policy does not extend to scientists who work for local, state and tribal agencies that receive EPA grants, instead focusing on academic researchers. At a press conference, Pruitt said that scientists on three major EPA advisory panels have received US$77 million in grants over the past three years.

“When you receive that much money, there’s a question that arises about independence,” Pruitt said. Moving forward, he said, scientists “will have to choose — either the grant, or service, but not both.”

Scientists and environmentalists blasted the policy as hypocritical and dangerous, saying it will exclude many top researchers while rendering the volunteer posts less attractive for those who remain eligible. The EPA's multitude of science advisory boards provide input on everything from proposed regulations to the agency’s long-term research agenda.

“It’s a disturbing and short-sighted action,” says Peter Thorne, who chaired the agency’s main science advisory board until the end of September. Thorne, a toxicologist at the University of Iowa in Iowa City, says that the board already has policies in place to deal with conflicts of interest — such as those related to research by a board member or financial interests among industry scientists. “I’m really baffled as to why this is necessary,” he says.

The EPA’s new policy borrows from legislation backed by Republican lawmakers that has been circulating in the US Congress for several years. In March, the US House of Representatives passed the latest version, which would restrict scientists with EPA grants from serving on the Science Advisory Board and loosen rules that seek to address any conflicts of interest related to industry scientists who serve on the panel. The fate of that bill is uncertain, however, since the Senate — which would have to give its approval before the legislation could become law — has not taken action on the matter.

“The reason it couldn’t get through Congress is that it doesn’t make any sense,” says Andrew Rosenberg, who heads the Center for Science and Democracy at the Union of Concerned Scientists (UCS), an advocacy group in Cambridge, Massachusetts. “It turns the idea of conflict of interest on its head.”

Rosenberg’s group analysed the current membership of the EPA’s main science advisory board and found that 5 of the 47 members could be barred by the new policy. But the EPA restrictions on advisory-board members could soon affect a much larger swathe of panel appointments. The terms of 15 people on the agency’s main science advisory board expired at the end of September. EPA watchers are also expecting to soon see appointments to the Board of Scientific Counselors, which advises the EPA’s main research arm, and a third panel that advises the agency on air regulations.

All three of those boards have new leaders, Pruitt announced today. Michael Honeycutt, a toxicologist at the Texas Commission on Environmental Quality, will lead the agency’s main science advisory board. Honeycutt has long opposed EPA proposals to enact stricter air-quality standards. Tony Cox, an independent consultant, will lead the Clean Air Safety Advisory Committee, while Paul Gilman, chief sustainability officer at the energy firm Covanta in Morristown, New Jersey, will lead the Board of Scientific Counselors.

One senior EPA official, who declined to be named for fear of retaliation, says that agency leadership initially considered barring any scientist who had ever received an EPA grant from serving on any agency advisory panel. Ultimately, the agency decided to focus on researchers with active grants — in part because EPA officials discovered that it was hard to find qualified scientists who had never received EPA grants.

The agency’s overhaul of its advisory boards has been in the works for months. The EPA sparked an uproar in May and June by dismissing dozens of scientists who had served a single three-year term on the Board of Scientific Counselors. In the past, the agency has appointed many scientists for a second term to provide more continuity for programme managers who are seeking input on the vast array of research efforts at the agency.

For Thorne, the question is how the administration is going to engage with its new science advisers. In September, the main science advisory board issued a letter describing its activities and inviting Pruitt to attend one of its meetings. Whether Pruitt will take the committee up on its invitation remains to be seen, but Thorne says one thing is clear: if the agency chooses to marginalize or ignore the board, it will do so “at its own peril”.

The story has been updated with information from the EPA press conference.