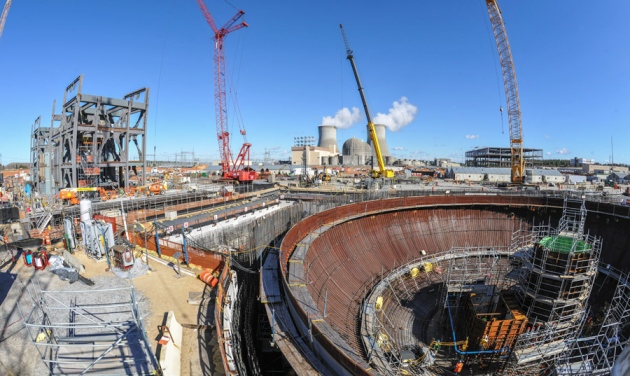 Two new nuclear power plants are under construction at the Vogtle project in Georgia.

The US Department of Energy said on 19 February that it has approved US$6.5 billion in loan guarantees for the $14-billion Vogtle nuclear project near Waynesboro, Georgia. The two reactors received regulatory approval in 2012 — the first new US reactors in roughly 30 years.

The announcement came as energy secretary Ernest Moniz reiterated the support of President Barack Obama’s administration for nuclear power as part of its “all-of-the-above” energy strategy to reduce dependence on foreign oil, and as a way to help to reduce US greenhouse-gas emissions. “The President wants to make clear that he sees nuclear energy as part of his carbon-free portfolio,” Moniz said.

These are tricky times for the US nuclear power industry, which faces stiff competition in some regions from natural gas and renewable energy. Market pressures drove the closure of nuclear plants in Vermont and Wisconsin in the past year, and safety and reliability concerns have prompted plants in California and Florida to shutter. Aside from the two reactors under construction at the Vogtle site, only two other reactors have been approved for construction, in South Carolina. Projections from the US Energy Information Administration released in December suggest that US nuclear power generation for electricity will grow by 5% from 2012 to 2040, even as its share of the electricity market is predicted to fall from 19% to 16%.

“Utilities are behaving very conservatively right now,” says Doug Vine, a senior fellow at the Center for Climate and Energy Solutions in Arlington, Virginia. That is less true, he notes, in states with regulated electricity markets, such as Georgia and South Carolina, which can set rates that allow power operators to recover the high capital costs of nuclear power plants from consumers.

Elsewhere in the country, the Energy Department’s effort to spur a nuclear renaissance seems to have fizzled. Only a handful of nuclear projects have applied to the Energy Department loan-guarantee programme that began in 2005, when backers anticipated a boom in the demand for nuclear energy. The programme allows up to $17.5-billion in guarantees in which the government would assume debt if the borrower defaults. “This is probably closing the chapter on the story that started back in 2005,” says Edwin Lyman, a senior scientist at the Union of Concerned Scientists in Washington DC. “It’s more or less the end, rather than the beginning.”