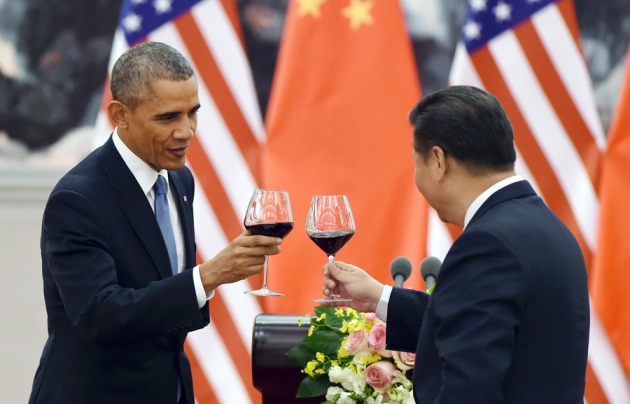 A sudden climate truce between China and the United States has renewed hopes that a two-decade stand-off between developed and developing nations over addressing climate change may at last be coming to an end. The first test will come as international negotiations resume on 1 December at the conference of the United Nations Framework Convention on Climate Change (UNFCCC) in Lima. Negotiators expect to lay the groundwork there for next year’s summit in Paris, where countries are scheduled to sign a treaty that would probably take effect after 2020.

In the deal with China, US President Barack Obama committed the United States to reducing its emissions to 26–28% below 2005 levels by 2025. Chinese President Xi Jinping pledged that his country’s emissions would peak around 2030, although he did not specify an exact level (see ‘Carbon budget’). 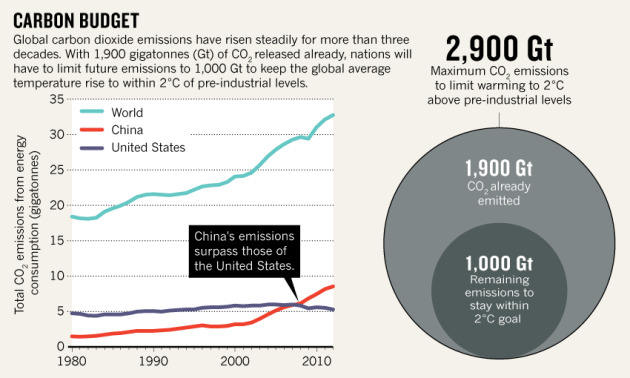 “It’s hard to imagine a more important signal to get the ball rolling,” says Elliot Diringer, executive vice-president of the Center for Climate and Energy Solutions, a think tank in Arlington, Virginia.

Much of the focus in Lima will be on how to translate a patchwork of emissions-reduction pledges such as the US–China deal into a fully fledged international agreement. The 2009 Copenhagen Accord brought developed and developing countries under one umbrella for the first time, but critics say that it resulted in little more than a list of promises. The question heading into the Paris summit is how to lock those national pledges into a more robust framework that includes formal procedures for verifying that countries meet their commitments, intervening when they do not and then revisiting the pledges to ratchet down emissions over time.

Saleemul Huq, director of the International Centre for Climate Change and Development in Dhaka, says that the US–China agreement marks a shift in climate negotiations. Battles may arise over the ultimate treaty’s structure, further emissions reductions and financial aid promised by developed nations. But most countries, rich and poor alike, are now aligned and committed to addressing climate change. “I think momentum is the key, rather than an agreement that solves everything on paper,” Huq says.

He maintains that the political challenge is quite simple: move investments away from fossil fuels and into clean energy. “If we can make that switch,” he says, “then we have more or less won the game.”

Nations have committed to limiting the global average temperature increase to 2 °C above pre-industrial levels, but so far there is little evidence that their governments will follow through. Scientists have calculated an overall limit on how much more carbon dioxide can be emitted to stay within that range — about a trillion tonnes — and mapped out a range of emissions-reduction pathways that are required to keep within that budget. On the basis of commitments in place before the US–China deal, the UN Environment Programme projects that emissions will exceed the level consistent with the 2 °C mark by 40% in 2030.

The US–China deal will not close this gap, but it is nonetheless a step in the right direction, says Bill Hare, managing director of Climate Analytics, a think tank in Berlin that analyses national climate policies. “They are definitely within shouting distance of the 2 °C pathway,” he says, “and it’s going to put pressure on many others to enter the game.”

The European Union has already said that it will reduce its emissions to 40% below 1990 levels by 2030, and further pledges are expected in the first quarter of 2015. Whereas the 1997 Kyoto Protocol bound only developed countries and covered around 40% of global emissions, experts expect that the current round of commitments, scheduled to be submitted to the UNFCCC by March, includes all major countries and is likely to cover up to 80% of global emissions.

“It’s a completely different ball game,” says Valli Moosa, a former environment minister for South Africa and current chairman of the conservation organization WWF South Africa. He is currently co-chairing an independent dialogue involving climate officials from more than 20 leading countries at the Center for Climate and Energy Solutions — and on the basis of those discussions, he thinks that the road to Paris looks promising.

“Everything is aligned for success,” he says. “Having said that, it’s anybody’s guess.”

The y-axis on the graphic in this story was originally out by a factor 10. The true scale is 0–35 gigatonnes not 0–3.5 Gt. The graph has now been corrected.