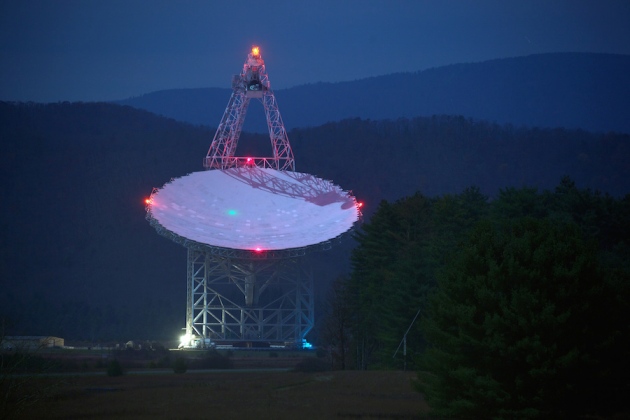 The Robert C. Byrd Green Bank Telescope in West Virginia, the largest fully steerable dish in the world, is among the facilities that the US National Science Foundation has said it can no longer fund in full.

US-based astronomers and astrophysicists are seeing their applications for research grants rejected at higher rates because of stagnant budgets and an uptick in the number of resubmitted proposals, according to a draft report written for an advisory committee to the US National Science Foundation (NSF).

The authors posted the document on the arXiv preprint server1 on 4 October, ahead of a November meeting in which the advisory committee is set to discuss the issue.

The report highlights more than a decade of falling success rates for astronomical science grants at the NSF and NASA, as the number of proposals has increased faster than agency budgets. For instance, between 2004 and 2015, certain NASA programmes had their funding increased from US$71 million to $80 million, a bump of less than 13%. Over the same time frame, the number of proposals competing for a piece of that money jumped from around 500 to 800 — a 60% increase. One key NSF astronomy and astrophysics programme funded fewer than 20% of proposals in 2014, down from nearly 40% in 2002. And some NASA programmes saw rates fall from around 30% to 18% between 2004 and 2015.

“Up until now, for all of the collective hand-wringing about the declining funding rates, the only quantitative explanations have been urban legend and anecdote,” says Keivan Stassun, an astronomer at Vanderbilt University in Nashville, Tennessee, and a co-author of the analysis.

The report rules out many explanations suggested for the drop, Stassun says. For example, some scientists wondered whether the quality of proposals has been decreasing — but data from NASA show that among the astrophysics grant proposals submitted to the agency, the fraction receiving scores from 'very good' to 'excellent' remained roughly constant from 2007 to 2012.

Another explanation was that a flood of new principal investigators was beginning to saturate agencies with proposals. But demographic data from the NSF show that the number of submitters who earned a PhD fewer than 15 years ago has actually dropped by 5% since 2006.

However, the main problem, the report concludes, is that while funding has stayed flat, the total number of astronomers has continued to rise. And the rate of resubmitted proposals has risen even faster, as investigators who failed to secure funding one year tried again in following years. These resubmissions now account for a disproportionate number of grant applications, compounding the problem and causing the dramatic drop in success rates.

Stassun and his colleagues estimated how the amount of time spent writing grant proposals affects scientific productivity, by comparing the time that investigators take to prepare their applications2 to their chance of winning a grant and the average number of papers that a grant typically produces. They suggest that if success rates were to dip to 6%, the grants would result in fewer papers than the productivity the community as a whole lost in the application process.

The problem of low success rates is not limited to astronomy and astrophysics, says Joel Parriott, director of public policy for the American Astronomical Society in Washington DC. “It's obviously not just us; it's all basic research,” Parriott says.

The report enumerates the “knobs” that agencies can adjust to improve success rates, such as reducing the size of the average grant and shifting more money from facilities to investigators. Other fixes, such as limiting the number of proposals from investigators who have submitted too many unsuccessful applications, only “disguise the problem”, the report argues.

For his part, Stassun thinks that the idea of shifting some resources from facilities to grants deserves a closer look. Indeed, the NSF is currently executing plans to stop supporting several large telescopes. Stassun says that there is always a “difficult balance to be struck” between investing in facilities and the people who will use them to make discoveries.