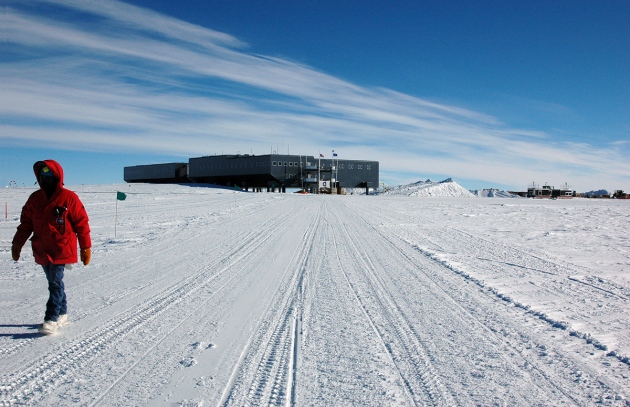 The South Pole's Amundsen–Scott station would be left with only a skeleton crew if funding is not restored.

The National Science Foundation (NSF) is likely to cancel the US Antarctic programme’s upcoming field season if the US government shutdown persists through mid-October — jeopardizing hundreds of scientists’ work in glaciology, ecology and astrophysics.

The agency has kept its three Antarctic research stations open during the initial days of the shutdown, which began on 1 October, under rules designed to protect human lives and US government property. But Lockheed Martin, the contractor that runs the NSF’s Antarctic operations, has told researchers that it will run out of money by mid-October.

At that point, the company would be forced to evacuate all but a skeleton staff from McMurdo, Amundsen–Scott and Palmer stations. And that would spell the end to this year’s research season, which normally runs from October to February.

"We are in a major planning mode to begin an orderly transition to caretaker mode at the stations," a Lockheed official wrote in a 4 October e-mail to researchers. "A decision will be made early next week." A spokeswoman for Lockheed Martin’s Antarctic operations, based in Denver, Colorado, declined to comment on the matter, and officials at the NSF — where some 98.5% of employees have been ordered to stay home until the shutdown ends — did not respond to Nature’s requests for comment.

Researchers are devastated. Many have already been forced to cut back or delay their research projects because of the US government’s 5.1% across-the-board ‘sequestration’ that took effect on 1 March.

The prospect of losing an entire Antarctic field season is “just hell”, says Diana Wall, an ecologist at Colorado State University in Fort Collins. Since 1989, she has tracked fluctuations in the populations of nematodes, mites and other soil dwellers in Antarctica’s Dry Valleys. “If we are not there to capture the demographics this year, our whole data set could be unintelligible.”

Another casualty would be Operation IceBridge, an aerial NASA campaign to map ice sheets in remote parts of Antarctica. This is the first year that IceBridge’s Antarctic flights have operated out of McMurdo station, rather than Punta Arenas, Chile. The move was designed to expand the areas that researchers can reach using NASA’s P-3 aircraft, which carries instruments to measure the height of the ice sheet and to detect the depth of water trapped below it. “This was going to be our chance to see the ice sheet in a way that had never been done before,” says Robin Bell, a glaciologist at Columbia University’s Lamont-Doherty Earth Observatory in Palisades, New York.

Even a delayed start to this year’s field season could harm IceBridge. It takes a week to install instruments on the NASA P-3, a process that did not start today as planned. It takes another week to transport the 10 IceBridge researchers to Antarctica. McMurdo station’s sea-ice runway closes for the summer on 28 November, although researchers may be able to switch operations to a year-round ice runway near the station.

Also affected would be the study of Antarctica’s subglacial lakes, pristine environments that have been isolated for millions of years. Ross Powell, a geologist at Northern Illinois University in DeKalb, had planned to continue his study of Lake Whillans, a body of water trapped 800 metres under a glacier. Earlier this year, a drilling expedition reached the lake, and researchers found communities of bacteria. Powell is now trying to understand how isolated the lake is — whether it connects to nearby subglacial streams, and how that network of water affects the glacier’s flow into the Ross Sea.

But the project has already been forced to cut eight scientists, and the planned number of days for field research this year was cut in half, to 10, because sequestration reduced the NSF’s Antarctic science budget. Now, Powell says, “it’s all up in the air.” Like other researchers, Powell says that he has not heard from the NSF directly about the possibility that the Antarctic season will be cancelled.

Mahlon Kennicutt, a retired oceanographer and a former president of the 31-nation Scientific Committee on Antarctic Research, says the shutdown complicates an already unstable funding situation for US Antarctic science.

Last year, a blue-ribbon panel commissioned by the NSF warned that logistical costs — including transportation and support personnel — now consume 85–90% of the US Antarctic programme’s budget. That is partly a consequence of operating on the coldest, driest and highest continent on Earth, and partly a consequence of the country’s crumbling polar infrastructure, the panel warned.

Now, sequestration and the shutdown are magnifying that problem, Kennicutt says. “Science will inordinately bear the brunt of these fiscal problems. This is a long-term issue. You have to wonder if there is a point at which this just can’t function.”