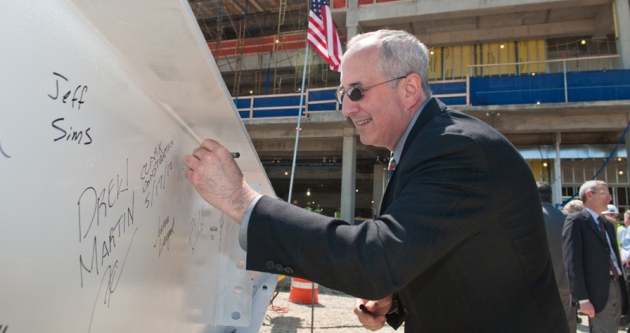 Eric Isaacs, director of the Argonne National Laboratory (shown here at a ‘topping out’ ceremony for the lab’s Energy Sciences Building in May), has worked to engage industry in research on batteries.

Eric Isaacs got some high-level validation last week. The director of Argonne National Laboratory in Chicago, Illinois, Isaacs had enlisted two industrial giants — Dow Chemical and Johnson Controls — to help with the basic research for a lithium–air battery that could one day match the energy density of petrol. “You have to have every­one working together very early on,” he says.

On 30 November, the same day that Argonne received US$120 million from the Department of Energy to lead a national energy-storage research centre, science advisers to US President Barack Obama were praising the idea of national labs partnering more often with industry. In a report, the President’s Council of Advisors on Science and Technology (PCAST) said that industry ties with universities and national labs such as Argonne are crucial for maintaining international competitiveness in research (PCAST Transformation and Opportunity Executive Office of the President, 2012). The panel also recommended that the US Congress find ways to make research funding for long-term initiatives more stable, and said that foreign graduate students in science should be given fast-tracked, long-term visas.

PCAST’s calls to action echo those made in a June study from the National Academies, which also underscored the need for heightened industry involvement in research (Committee on Research Universities Research Universities and the Future of America National Academies Press, 2012). But Michael Turner, an astrophysicist at the University of Chicago and a consultant on the PCAST report, says that the latest publication may carry extra weight in Washington DC because of its authors. “These are people who speak directly to the president and his closest advisers,” he says.

Like earlier studies, the PCAST report says that US research pre-eminence is under threat as industry support for basic research shrivels and other nations ramp up spending. “We do have rivals, more and more of them, all the time,” says John Holdren, director of the White House Office of Science and Technology Policy and co-chairman of PCAST. Despite a challenging fiscal climate, the PCAST report says, US spending on research and development should rise to 3% of gross domestic product — roughly $450 billion — compared with 2.9% in 2009 (see ‘Big spenders’). 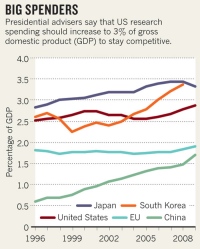 David Goldston, director of governmental affairs at the Natural Resources Defense Council in Washington DC, says that such a sum may be unrealistic. Universities cannot simply continue to clamour for more money, he adds. “If we thoughtfully shrank the system, what would that entail and in what ways would we really be worse off?” He notes that the 2012 National Academies study recommended that research universities try to stretch the funding that they already have by rooting out inefficiencies in research management.

Another recommendation, for greater funding stability, clearly faces an uphill battle. With the US Congress setting agency funding levels on a yearly basis, budgetary uncertainties can not only hamper research in the United States but also interfere with long-term collaborations with sister agencies abroad, says Subra Suresh, director of the US National Science Foundation in Arlington, Virginia. Suresh has noted how much easier his life would be if funding were more predictable, as it is in Europe. There, the European Commission and European Parliament are planning the next seven-year budget, and the German Research Foundation (DFG), for example, works with five-year guaranteed budgets.

But Bart Gordon, a former Democratic congressman from Tennessee and chairman of the House science committee until 2011, says that congressional appropriators are likely to want to continue to wield power over annual budgets. PCAST vice-chairman William Press, a computational biologist at the University of Texas at Austin, says that he would be content if the science advisers’ report convinced appropriators to stick more closely to funding levels decided by authorizing committees, which plan agency budgets with an eye on longer-term goals.

William Banholzer, chief technology officer for Dow, which is based in Midland, Michigan, says that interactions between federal researchers and industry could also be improved. For instance, he says, if Dow wants to change the direction of the research that it sponsors at Argonne, it has to seek approval at three levels: Argonne, the University of Chicago (which leads a consortium that manages the lab) and the Department of Energy. “At least one of those is redundant,” he says.

Isaacs doesn’t deny that national labs need to become more welcoming to industrial partners. The benefits are clear, he says. “You can have impact by winning a Nobel prize. But you can also have impact by inventing a way to produce biofuels [or by] working with Dow.”