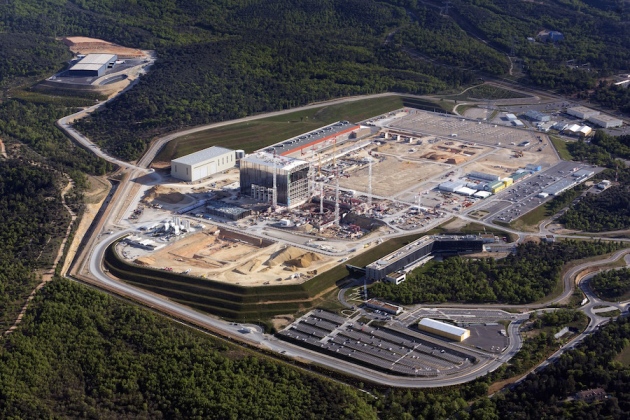 The ITER project under construction in southern France on 29 April 2016.

The troubled multibillion-euro nuclear-fusion project ITER has improved its performance and management, and the United States should continue to support the experiment at least until 2018, the US Department of Energy (DOE) said in a report to Congress released on 26 May. After that, the agency said, the country should re-evaluate its position.

ITER is an unprecedented collaboration between the European Union, China, India, Japan, South Korea, Russia and the United States. Its ambitious goal is to show that fusing hydrogen nuclei to make helium — the same process that heats up the Sun and powers hydrogen bombs — is a technologically feasible way to produce electricity. The experiment is under construction at a site in St-Paul-lez-Durance in southern France, but the work is more than a decade behind schedule, and its costs have spiralled far above the original budget.

In its report, the DOE acknowledges ITER’s immense scientific potential, and the substantial improvements in the project’s management and performance since current director-general Bernard Bigot took over in March 2015. “ITER remains the best candidate today to demonstrate sustained burning plasma, which is a necessary precursor to demonstrating fusion energy power,” US energy secretary Ernest Moniz writes in the report’s introduction.

But the DOE also notes that it will take more time to determine whether ITER will ultimately succeed. The agency says that the project’s promising improvements “must be balanced against several years of inadequate performance”. Its recommendation to continue US funding is contingent “on continued and sustained progress on the project, increased transparency of the ITER project risk management process, as well as a suite of management reforms proposed in this report that we expect will be agreed upon by the ITER Council”, according to Moniz’s introduction.

“I think it’s an outstanding report that says all of the right things,” says William Madia, a former director of Oak Ridge National Laboratory in Tennessee who led an independent review of ITER in 2013. That report excoriated the way in which ITER was run, and proposed reforms to save the project from failure — recommendations that ITER’s governing council embraced.

Madia says that the DOE is appropriately encouraged by recent management changes, and appropriately cautious about whether the project is actually back on track. “Bernard is doing a terrific job, but my goodness, he’s got a lot of work to do,” he says.

Bigot acknowledges as much, and says that the DOE’s conclusions are as much as he could have hoped for at this point. “We passed this important milestone, but we know there is still a long way to go,” he says.

The DOE is a major funder of fusion research, but it is Congress that holds the purse strings. Although the United States is bound by an international treaty to provide its share of ITER’s costs — a relatively small 9% of the project’s budget — it cannot meet its contributions if Congress does not approve them.

The report’s recommendations have already provoked scepticism on Capitol Hill. Senator Dianne Feinstein of California, the highest-ranking Democrat on the Senate panel that oversees DOE spending, says that the United States cannot afford to keep pace with ITER’s growing budget. The DOE estimates that the country’s current annual contribution to ITER, US$115 million, will more than double by 2018.

“The cost of ITER has grown too large and the timeframe for completion is too long,” Feinstein said in a statement. “It’s time to wind down our role.”

Last year, the Senate proposed to end support for ITER, but backed down during final budget negotiations with the House of Representatives. This year, it is not clear that ITER will win a reprieve. On 12 May, the Senate approved an energy-funding bill for fiscal year 2017 that cut all spending on ITER in favour of higher-priority projects. And on 26 May, the House rejected its own 2017 energy-spending bill, which included money for ITER.

If the United States were to pull out, ITER would probably survive, says Mark Koepke, a plasma physicist at West Virginia University in Morgantown, who leads a government advisory panel on fusion research. But at hearings in April, Bigot told US lawmakers that the country’s fusion experts provide expertise that would be difficult to replace.

Madia says that it’s impossible to predict how ITER would be affected by a US exit. “It makes good cocktail conversation, but no one knows what would actually happen,” he says.

The ITER project began in 2007, with the treaty signed by its international members came into force. Its approach to fusion is to trap heavy isotopes of hydrogen in a doughnut-shaped vacuum vessel known as a tokamak and heat them up to 150 million °C. This should force their nuclei to fuse into helium, releasing vast amounts of energy. Tokamaks have existed around the world for decades, but ITER would be the first to release substantially more energy than was put into the hydrogen plasma. It is predicted to produce about 500 megawatts of electricity. 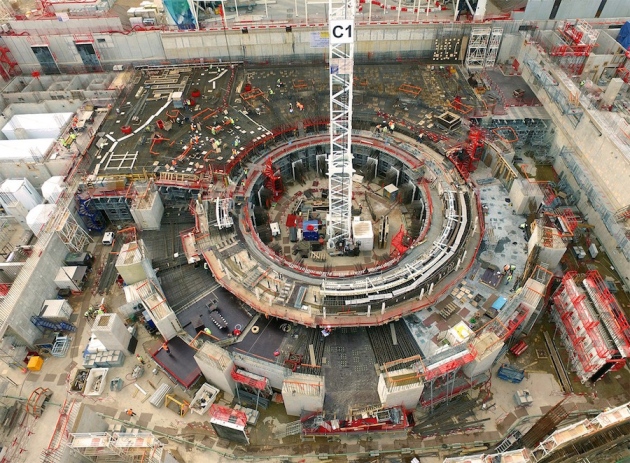 The project was originally due to be completed in 10 years for €5 billion (US$5.6 billion), but it has been plagued by a series of delays. The latest DOE report comes against a backdrop of criticism directed at ITER’s former management, and some subsequent progress towards improvement.

Observers say that under previous director-general Osamu Motojima, who was in office from 2010 to 2015, the experiment was in denial about slipping deadlines and witnessed a drop in staff morale. After the independent review by Madia, the ITER Council accelerated the transition to a new director-general, nominating Bigot, a French nuclear physicist with extensive management experience, in late 2014.

By November 2015, Bigot’s team had presented a revised timetable for the project, and estimated that it would cost an extra €4.6 billion to bring it to completion. The team said that the earliest possible date for getting hydrogen plasma to run inside the machine was 2025, and that it would take several years after that for the project to inject the heavier hydrogen isotopes tritium and deuterium, and achieve fusion.

In April, an external review from the ITER Council Working Group confirmed that progress had been made on implementing the recommendations of the Madia report, and that the new management had been realistic about the earliest possible date for plasma. “One of the things we came away with is that the schedule that has been prepared by the ITER team is very rigorous,” says group member Steven Cowley, head of the UK Atomic Energy Authority. But the reviewers also pointed out that the estimates of costs and completion date did not take into account possible contingencies.

Keeping to this plan would require ITER's members to increase their contributions. So Bigot’s team also proposed a more modest plan, which focuses on achieving first plasma on time but delays fusion. This should save money by postponing the parts of construction that are not needed for first plasma, but no one has yet calculated how much.

“This is the most complicated piece of engineering anybody has ever attempted, ever,” says Cowley. “Anybody who thought this project was going to be easy and was going to sail through has never seen a big project.”

The latest DOE report recommends funding the cost increases cited by Bigot, but remains sceptical about the schedule. It outlines two funding scenarios: one based on achieving first plasma in 2025, and a more realistic scenario that pushes the date back to 2028.

Bigot insists that the 2025 deadline is technically achievable, and says that partner countries should do everything they can to meet that deadline. “If we are successful, it will be a real breakthrough for the energy supply of the world,” he says. “We are fully committed to deliver.”