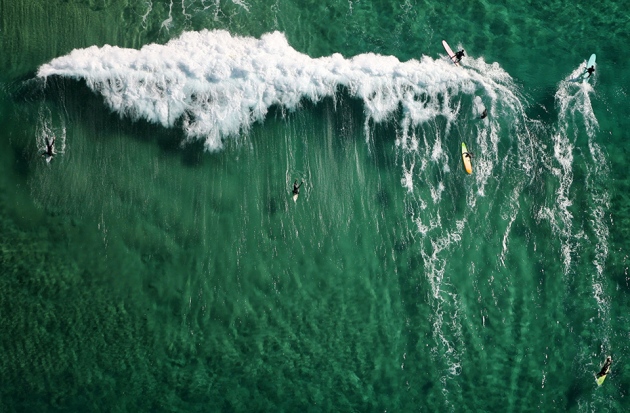 The World Surf League, the governing body of professional surfing, plans to partner with a new climate research centre at Columbia University in New York City.

Like most researchers at Columbia University’s Lamont–Doherty Earth Observatory (LDEO), Park Williams is expected to win research grants to cover his salary. But times are tough for climate scientists, who face flat levels of government funding in an ever-expanding pool of competitors. Two years into a post as an assistant research professor, the 34-year-old bioclimatologist had yet to receive a single grant.

But on 22 January the Center for Climate and Life, a new research centre at Columbia that is seeking to raise funds from the business community, awarded Williams US$180,000 for his research on historical drought and fire cycles. Michael Puma, an environmental modeller at Columbia and NASA’s Goddard Institute for Space Studies, received $190,000 to investigate the impact of climate change on the global food system.

“I was beginning to worry about my future here and wondering if I’d be wise to begin applying for more-traditional professorships,” says Williams. “Now I’ll have time to actually do research.”

With climate-science funding under perennial threat in Washington DC, Columbia is engaging corporate philanthropists to boost research into the effects of projected environmental changes and how human systems can adapt. Seeded by Columbia with an initial budget of $3.1 million over five years, the Center for Climate and Life hopes to build a $200-million endowment that disburses around $10 million annually.

“It’s a very new way of funding science,” says Peter de Menocal, a palaeoclimatologist at the LDEO in Palisades, New York, who is directing the centre.

The centre will supplement salaries and research costs for scientists at Columbia, as well as at NASA’s Goddard Institute for Space Studies, which is located on the Columbia campus in New York City. De Menocal says that the centre will apply the same peer-review procedures used by the US National Science Foundation to ensure that its grants are directed towards the best research proposals.

With roughly 85% of scientists at the LDEO reliant on government grants for their salaries, de Menocal says, two decades of stagnant budgets for the environmental sciences have taken a toll. And Republicans in the House of Representatives, many of whom deny the reality of global warming, have attempted repeatedly to cut funding for climate-related research. De Menocal says that the funding situation has many young Earth scientists rethinking their career choice because of what he calls “a silly ideological divide”. The new institute should give them needed job security, he says, and allow the community to identify and pursue new research paths without waiting for Washington to come around.

Others have also recently turned to private philanthropy to fund climate research. “It is going to be very hard for the government to undertake a really big increase in federal research,” says Margaret Leinen, director of the Scripps Institution of Oceanography in La Jolla, California. In August, Scripps opened the Center for Climate Change Impacts and Adaptation with a donation of $5 million from energy executive Richard Hertzberg and his wife Carol Dean Hertzberg. And the Grantham Foundation for the Protection of the Environment, founded by investment manager Jeremy Grantham and his wife Hannelore, has helped to establish similar research institutes at multiple universities, including the Grantham Research Institute on Climate Change at the London School of Economics.

One of the Columbia centre’s initial partners is the World Surf League (WSL) in Santa Monica, California, which is the governing body of professional surfing. The organization says it seeks to promote environmental awareness among more than 120 million surfing fans around the world. As part of that partnership, Columbia plans to develop an online certificate programme focused on ocean science and conservation. The courses will be open to anybody beginning in 2017 and may evolve into a formal master’s degree programme.

“We’ve got this perfect combination of science and soul,” says Scott Hargrove, chief marketing officer for the WSL, which plans to announce its funding commitment as early as February. “Surfing has the power to move culture,” he says, with Columbia driving the science and education, and surfers serving as public ambassadors.

De Menocal is also in talks with French aerospace giant Airbus, which would provide the fuselage for a research aircraft that could be readily equipped with instruments to study everything from the atmosphere to rainforests and polar ice sheets. De Menocal says that the center is currently working on a viability study for the project.

“We want to change the way we do and fund science,” says de Menocal, “and fast track the science we need to understand how climate impacts people.”