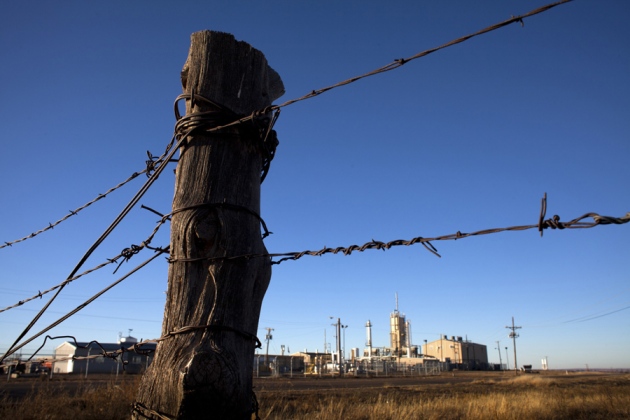 The United States maintains a strategic helium reserve in a geological formation near Amarillo, Texas.

The US House of Representatives voted unanimously on 25 September to delay closing the world's only strategic helium reserve, averting a potential supply crisis. But the move will not make life much easier for US researchers who are already struggling to cope with rising helium costs.

The price of the gas will continue to increase even if President Barack Obama signs the House bill into law, as expected. That would give the United States several years to gradually sell off the gas stored at the Federal Helium Reserve in Amarillo, Texas, which provides 42% of the country’s helium and 35% of the world’s supply. Yesterday’s vote overrides an older law that would have abruptly shuttered the reserve on 7 October. But it will take some years for other countries to fill the gap left by the dwindling supplies in the United States.

With the end of cheap helium, many US researchers have been scrambling to buy equipment that would allow them to capture escaped gas or reduce their helium use altogether. Some scientists rely on helium, which has a uniquely low boiling point of 4 kelvin, to cool the superconducting magnets that are crucial to magnetic resonance imaging (MRI) machines; others, such as physicist Jonathan Friedman of Amherst College in Massachusetts, use it to study how matter behaves at ultra-low temperatures.

Friedman paid US$60,000 two years ago — nearly two-thirds of his annual research budget — to buy a system that captures and recycles helium. But he expects the investment to pay for itself in five years: the liquid helium he needs to run experiments at temperatures near absolute zero had doubled in price over the past decade to $12.50 per litre. Because of the increased costs, Friedman had to shut off a second piece of equipment, a helium-run dilution refrigerator that a student had relied on.

The rising cost has forced many other scientists to make difficult decisions, too.

“Every time the price of helium goes up, I get more calls. Each time it’s another kick in the pants,” says Greg Labbe, director of cryogenic services at the University of Florida in Gainesville. Labbe runs one of the most sophisticated university helium-recovery systems in the United States, capable of capturing and condensing 90% of helium that dissipates in his labs. It also tracks helium levels on an hourly basis in storage containers to detect leaks.

The US reserve, which stores crude helium recovered from natural-gas fields, will now begin to auction off more and more of its store each year to pay off the debt incurred by stockpiling the gas over decades. In doing so, it will cease to be a player in the market that it has dominated since the 1920s, when national security concerns over airship technology prompted its creation.

Although extending the life of the reserve has prevented a ‘helium cliff’, experts say that the price of the gas may increase by up to 50% as US supplies dwindle. There are few private suppliers in the United States because the national reserve crowded out competitors, and it will take years for other countries, including Qatar and Russia, to slowly ramp up their helium production. In the very long term, helium is a non-renewable resource because it is so light that, once released, it escapes from Earth’s atmosphere.

Although gas-capture systems that allow very little helium to escape have been around for a long time, few US scientists adopted them when helium was cheaper. Now, such systems are becoming more common in academia. Harvard University in Cambridge, Massachusetts, installed its system this spring, funded in part by a $1.3-million National Science Foundation infrastructure grant it received in 2010. The University of Minnesota began installing helium-capture equipment four years ago at its Center for Magnetic Resonance Research in Minneapolis, which houses nine MRI machines. Before that system came on line, one of those machines lost up to 50 litres of gas per day.

But with federal science agencies now squeezing grants in response to broad budget cuts, individual investigators at smaller labs are feeling pinched by rising helium prices. Liquid helium can make up 30% of the cost of some low-temperature physics projects, so volatile prices complicate budgeting for multi-year grants.

The high price of helium may have one silver lining: it has spurred researchers to think more about how to conserve the gas. “When we have precious resources that aren't renewable, I think we have a moral responsibility to use them as wisely as we can,” says physicist Gerald Gabrielse of Harvard University, who helped to install the helium-recovery system there.