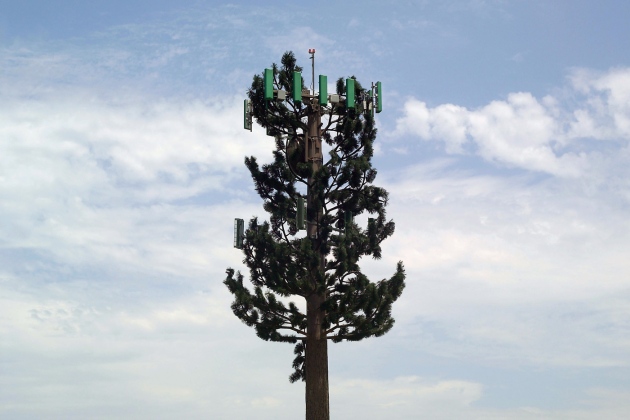 A new design could make bulky antennas — here shown in a cellular phone tower — up to one hundred times smaller.

Metal antennas that send and receive TV signals and radio waves could soon be replaced by tiny films up to one hundred times smaller, scientists say. Among the possible benefits are smaller smartphones and wearable technology, and miniaturized implantable devices to stimulate brain cells.

Conventional antennas are bulky because they transmit signals by oscillating a current of electrons up and down a metal cable, sending out electromagnetic (EM) radiation with a wavelength that's related to the cable’s size. For the most commonly used part of the radio-wave spectrum, this means antennas need to be centimetres — or tens of centimetres — long, depending on the wavelength of radiation they emit.

The prototype antennas work by coupling acoustic waves — vibrations in a material — with electromagnetic waves. They employ a thin piezoelectric membrane, which vibrates when subjected to an electric current. This vibration in turn stretches and compresses an attached film which contains magnetic particles. That action creates an oscillating magnetic field, and in turn an electromagnetic wave. The process occurs in reverse to pick up radio waves: incoming radiation sets up an oscillating magnetic field in the film, which induces vibrations in the attached membrane, whose changing shape generates the electric signal.

The antenna can be so small because the acoustic waves in its membrane travel more slowly than the electromagnetic waves that they generate. An ultra-high-frequency radio wave of 1GHz (gigahertz), for instance, oscillates one billion times per second. In one-billionth of a second, this wave — moving at the speed of light — travels 30 centimetres. But a thin film oscillating at the same frequency budges only a few hundred nanometres.

The idea for an ultra-compact magnetic antenna was proposed two years ago2, but this is the first time that a prototype has been tested, Sun says. “This work has brought the original concept one big step closer to reality,” says Yuanxun Ethan Wang from the University of California, Los Angeles, one of the scientists who came up with the underlying theory. Wang cautions that it’s not yet clear that the small antennas outperform traditional antennas in every respect.

Sun says that his team is already working with companies to commercialize the technology, and expects communication systems using these small antennas to be in use “within two to three years”

The antennas might be used on chips in the brain, Sun says. Biomedical researchers already use transcranial magnetic stimulation — in which a magnetic coil positioned outside the head induces electrical currents inside the brain — to treat depression and migraine; the technique is also being researched to treat learning disorders. But directing the electromagnetic waves from the coil is tricky. An implantable, controllable chip that receives and emits electromagnetic radiation could stimulate neurons more precisely, if its antenna could be shrunk.

Sun thinks that consumer applications, such as wearable technologies and smartphones, might also benefit. Antenna size isn’t always the limiting factor for smartphones, but developers are increasingly cramming in multiple antennas of different sizes for services such as Wi-Fi, GPS and near-field communication for contactless payments, Sun notes — so making the antennas smaller could help to streamline their design.