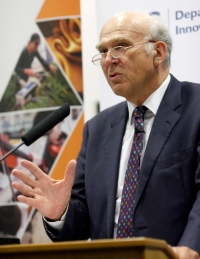 Industrial policy has long been anathema in UK politics. Anyone proposing a comprehensive strategy to spur the growth of high-tech industries would be accused of ‘picking winners’ — a euphemism for shoring up failing businesses with subsidies. But in the face of Britain’s sagging economy, some of its leaders may have had a change of heart.

In a speech on 11 September, UK business secretary Vince Cable set out a long-term vision for how the government could boost established powerhouses of the British economy, such as the car and aerospace industries, and emerging areas, such as biotechnology. But although they welcome his words, science-policy experts say that the measures announced are too modest and piecemeal to succeed given the meagre government spending on applied research. By contrast, federal and state governments in the United States liberally support technology start-ups, and huge, mission-driven agencies such as NASA have spurred the growth of technology-based companies.

Others say that flat public funding for UK research is the real barrier for science-driven businesses. Geneticist Paul Nurse, president of the Royal Society, says that the minister’s vision failed to acknowledge that a successful industrial policy rests on long-term, stable support for science. “The discovery science lays the foundation of the building, and if you don’t have the foundation it will eventually fall over.”

Cable’s plans include a government-backed bank that would lend to small businesses struggling to raise cash, and a £250-million (US$405-million) ‘employer ownership’ pilot scheme to help companies build a skilled workforce through apprenticeships and vocational courses. Competitions for £1.25 million in funds for energy-efficient computing and £1 million for technologies to extend the life of batteries by harvesting energy from the environment will be launched on 8 October. Open to universities and businesses, they will award cash to study how innovations might be commercialized. Cable also announced a new Innovation and Knowledge Centre in Synthetic Biology. Details are hazy, but it is likely to be somewhere that researchers and entrepreneurs can meet to work out ways of overcoming roadblocks to commercializing science.

Critics say that these measures aren’t enough to halt the fall in spending on research and development (see ‘Left behind’), especially by UK businesses. “Given the total inadequacy of the resources being made available, it’s difficult to see this strategy making any difference,” says Richard Jones, pro-vice chancellor for research and innovation at the University of Sheffield. He points out that his university’s Advanced Manufacturing Research Centre, praised for its collaborative research with engineering firms in a paper accompanying Cable’s speech, would not have got off the ground without public funds from the European Union and elsewhere. 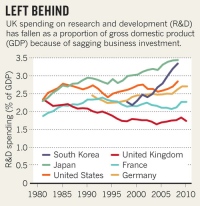 Many policy experts advocate boosting the budget of the Technology Strategy Board — an agency that supports near-market research and development — and of the seven ‘Catapult’ centres, loosely modelled on Germany’s Fraunhofer Institutes, which aim to stimulate links between businesses and universities. But with Britain in deep recession, any major investment in industrial research would face opposition from politicians on the right, who often argue that the best thing a government can do for business is to spend less and cut red tape.

“There are absolutely areas where we believe there should be deregulation and simplification,” says Steve Bates, chief executive of the UK BioIndustry Association in London. “On the other hand, you don’t get strategic sectors growing overnight without support and nurturing. The two go together.”