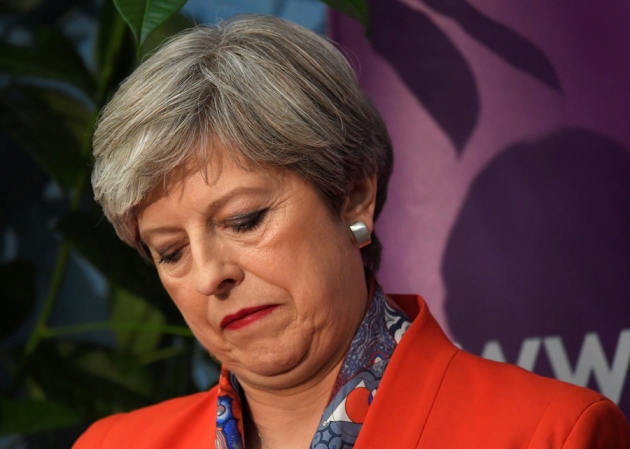 Theresa May's plan to increase her Conservative party's majority ahead of Brexit negotiations has backfired.

The United Kingdom’s general election on 8 June has thrown the country's politics into disarray — but scientists trying to divine meaning from the chaos hope that the result will ultimately benefit their nation’s research ties with the European Union.

The Conservative government had called the election in an effort to stretch its slim majority, which would have given it a firmer mandate to negotiate Brexit, the United Kingdom’s split from the EU. The party, under the leadership of Theresa May, was aiming for a ‘hard’ Brexit — placing priorities on ending the free movement of EU citizens to the United Kingdom, cutting immigration and taking the country out of the EU’s single market. That stance alarmed scientists: it seemed likely also to cut the United Kingdom out of EU research programmes and dent the easy movement of scientists to and from the EU.

But the party actually lost seats — ending up eight short of an overall majority, although still the largest single bloc in the British parliament. After the result, which is termed a ‘hung’ parliament because no party has an outright majority, May said that she would form a government anyway, relying on the support of Northern Ireland’s Democratic Unionist Party, a relatively minor player in UK politics (see 'Uneasy partners'). Her cabinet remains largely the same: Greg Clark is still in charge of the Department for Business, Energy and Industrial Strategy — which has ultimate responsibility for research — and Jo Johnson is still science minister. The pro-Brexit politician Michael Gove has been appointed as environment minister.

Although the situation remains uncertain, the result suggests that the government has lost its mandate for the strict Brexit deal for which May had been aiming, says Paul Nightingale, deputy director of the Science Policy Research Unit at the University of Sussex in Brighton, UK. The result “makes it more likely that the UK will have a softer Brexit and will stay within EU science programmes”, says Nightingale, who was speaking in a personal capacity.

Any softening of the United Kingdom’s position on Brexit is “obviously good for our chances of staying in EU funding programmes”, agrees Kieron Flanagan, a science-policy researcher at Alliance Manchester Business School, UK. “Planning to ameliorate the effects of Brexit on science and research should be the number one goal,” he adds.

“Science has a lot to lose from a hard Brexit. So the prospect of a minority government yielding a softer Brexit is likely to appeal to science leaders who have been pushing to retain a range of EU benefits,” says Sarah Main, executive director.

The Conservative Party is relying on an informal agreement with Northern Ireland’s Democratic Unionist Party (DUP) to form the next government — which has put a spotlight on some DUP views. The party has a policy to block women’s access to abortion; a Member of Parliament who has called the Paris climate pact “totally flawed and pointless”; and a sizeable minority membership who think that creationism should be taught in science classes.

But researchers needn’t worry that such stances will affect UK laws: other politicians would veto them, says Kieron Flanagan, a science-policy researcher at Alliance Manchester Business School, UK. The DUP does advocate for a softer Brexit, however: it wants to maintain an open border with the Republic of Ireland after Britain leaves the European Union.

“The result may provide hope that a hard Brexit can’t be pursued with such vigour as before,” says Anne Glover, a biologist at the University of Aberdeen, UK, who was formerly the European Commission’s chief scientific adviser. “The optimist in me hopes that the hung parliament we seem to have at this stage might end in a rethink on Brexit, perhaps a delay,” she says. “If Brexit is pursued, research needs the closest possible deal we have to the one we have now.”

‘Still in a mess’

Senior Conservatives say that the result could weaken the United Kingdom’s hand in negotiations with the EU, which were set to begin on 19 June. “We had an evidence-free EU referendum, and now we have a negotiating party who, by their own admission, think their negotiating position has been weakened,” says Glover. “Not much cause for celebration — the future of research in the UK is still in a mess.”

Although May will, for now, remain Britain’s prime minister, her long-term position as leader could be in doubt. “May will limp along, but politically, she is toast,” says Nightingale. If she does ultimately go, then the Conservative government’s direction might shift under new leadership. “I don’t think there will be any change in alignment in the science budget and industry strategy,” he adds. Still, May’s trademark stance on restricting the number of foreign students coming to the country as part of large cuts to UK immigration could also be softened, Nightingale notes. Universities and some politicians in May’s own party have opposed the idea that overseas students should count in immigration quotas.

Ahead of the election, all three of the nation’s main national parties had pledged to raise funding for science, an unusual consensus that reflects the difficulties that UK research could face as a consequence of Brexit. Reaching an agreement on science spending becomes more important when governing is reliant on collaboration and cross-party consensus, says Graeme Reid, a science-policy researcher at University College London. The role of science minister becomes even more crucial in such an environment, he says, because the minister needs to provide a sense of direction, and work across political lines.

Although opposition party Labour failed to win a majority of votes or seats, it did much better than expected. Commentators speculate that a high turnout among young people and a wider drift away from the UK Independence Party were behind the rise. Labour, like the Conservatives, has pledged to follow through plans to leave the EU, but has said that it will seek to stay part of EU research programmes. The third national party, the Liberal Democrats, opposes leaving the EU: it increased its number of seats but did not see a large surge.

Among individual results, biochemist Julian Huppert failed to win back his seat as a Liberal Democrat MP, which he lost in 2015. And Conservative Nicola Blackwood lost her seat in Oxford West and Abingdon. Blackwood chaired the House of Commons Science and Technology Committee in 2015—2016, and had been “wonderful at reaching out to the science community to engage a broader range of people and coming up with innovative new ways of drawing science advice into parliamentary debate”, says Reid.

Details of Theresa May's cabinet and of the Democratic Unionist Party's policies were added on 13 June.