The major science funders in the United Kingdom are to introduce a set of principles on research integrity as a condition for receiving their grants.

Launched today, The Concordat to Support Research Integrity describes itself as an attempt to provide “a comprehensive national framework” for research governance. The initiative is led by Universities UK, the umbrella body for British higher education institutions and is backed by the country’s research councils and higher education funding councils as well as the medical research charity the Wellcome Trust. At today’s launch of the concordat in London, all the grant-giving bodies, which distribute much of the research funding in the UK, confirmed that they would seek to incorporate its principles into their funding conditions. 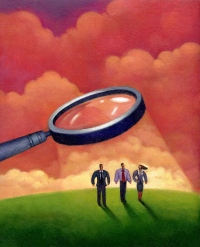 Researchers integrity is set to become a more prominent part of grant applications.

The principles include commitments to transparency and rigour in research. They also stipulate that those who employ researchers much have clear and confidential mechanisms for reporting allegations of misconduct as well as transparent processes for dealing with such allegations. Employers will need to provide annual summaries of their activities on research misconduct, including statements on any formal investigations undertaken. These could then be used as a baseline to judge how big a problem misconduct is in Britain and what progress is being made in dealing with it.

The concordat follows a meeting in January this year where a number of senior figures in UK research, many from the medical community, expressed grave concerns over the way in which issues of research integrity are dealt with (see British science needs 'integrity overhaul’). That meeting led to the publication in the British Medical Journal (BMJ) of a consensus statement on misconduct, which advocated strengthening the mechanisms for investigating misconduct1.

Concerns have been raised

UK universities are already an example of good practice in research integrity, Eric Thomas, president of Universities UK and vice-chancellor of the University of Bristol, said at today's launch. However, he added that “we must acknowledge that concerns have been raised” over mechanisms for enforcing integrity. “We cannot afford to be complacent,” he said.

Details of exactly how the concordat will be implemented are to be developed for what Thomas called a “comprehensive action plan”, scheduled for September.

Fiona Godlee, editor-in-chief of the BMJ, called the launch of the concordat a “significant step forward” for research integrity in Britain. Godlee, who was one of the main people behind the January meeting and consensus statement, said that the questions now were about the details of the implementation.

The concordat is a “positive example of professional self-regulation”, says Nicholas Steneck, director of the research ethics and integrity programme at the Michigan Institute for Clinical and Health Research in Ann Arbor and a longstanding advocate of tougher action on misconduct.

But he cautions that achieving the concordat’s goals will not be easy. “My concern is that the authors of the concordat have underestimated or downplayed the significant task ahead,” he says.