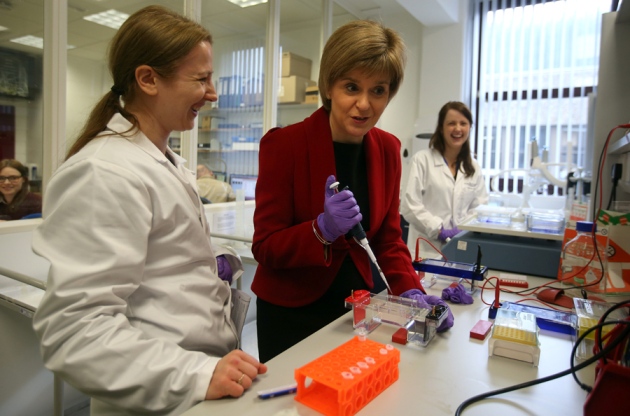 Nicola Sturgeon, leader of the Scottish National Party and First Minister of Scotland.

The UK general election on 7 May is uncertain on many fronts — not least in terms of what it means for science. Instead of the usual three-horse race between the two biggest parties, Labour and Conservative, and the Liberal Democrats (the country’s historical ‘third party’), it is likely that no one party will gain a majority, triggering a hung Parliament. As a result, a clutch of historically minor parties have a real chance of holding the balance of power — either as part of a formal coalition or by offering support to a minority government.

In a sign of the changing times, on 2 April, the leaders of seven parties are scheduled to participate in a televised debate; at the last general election, the debates featured just three parties.

So far in the run-up to the election, science has not featured prominently in the policies of any party. At a debate on 11 March at the Houses of Parliament, organized by the Society of Biology, representatives of the Conservatives, Labour and Liberal Democrats were all clear on the need to increase investment in science. However, only the Liberal Democrats, who are very unlikely to gain a majority, could commit to retaining the government’s ring-fenced budget for research — a pot of £4.6 billion (US$6.8 billion) in annual funding.

Anne Glover, a molecular and cell biologist at the University of Aberdeen in Scotland and former scientific adviser to the European Union, says that the smaller parties might do well to prioritize investment in science to project an appealing message to voters. “It’s a very positive thing, in an environment where there’s a lot of negative campaigning,” she says.

In the event of a hung Parliament, even minor parties that do not enter a formal coalition with the Labour or Conservative parties could still “greatly influence” policies, says Vernon Bogdanor, who studies government and politics at King’s College London. “In some ways, you’re stronger outside the government because you can bring the government down.”

In a poll of Nature readers (see ‘The science vote’), 74% — unsurprisingly — said that candidates’ attitudes to science would affect their vote (See also ‘UK election: Nature polls its readers on the science vote’).

Nature outlines how three of the minority parties most likely to wield power would influence science. 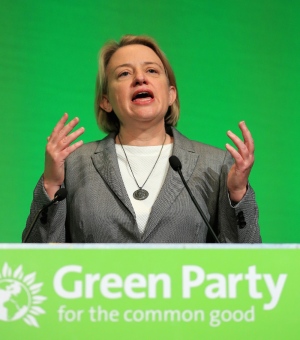 As the name suggests, the Greens have a lot to say about the natural world. But with a philosophy rooted in environmentalism, the party presents a mixed bag for research: it has pledged to try to increase government spending on science, but also to curb animal research, nuclear power and the commercial use of genetically modified (GM) organisms.

The party’s science spokesman, James Abbott, says that its opposition to all forms of animal research is not anti-science. “The Green Party approach to science is based on both evidence and ethics,” he says. “So we understand that animal experiments can be used in medicine, but disagree that that justifies pain and suffering to animals.” But Wendy Jarrett, chief executive of the London-based Understanding Animal Research group, which lobbies for scientists who work with animals, says that the Greens’ policies would be a “disaster for science”. “They are premised on a number of misapprehensions, such as that there are ready alternatives to using animals,” she says. She fears that much medical research would relocate out of the United Kingdom if the Greens were to succeed in curbing animal research.

Other Green policies may sit better with scientists. Abbott notes that the party set a target for government science spending at 1% of gross domestic product, equal to that suggested by a group of academic bodies in February (the current science budget is smaller). The Greens also say that curbing global warming is a priority — and that they support government investment in renewable energy. But Peter Knight, emeritus professor of physics at Imperial College London and former president of the Institute of Physics in London, fears that if the Greens have greater influence in government, nuclear power could fall lower on the government agenda, which would make it hard for the United Kingdom to achieve its carbon dioxide reduction goals.

Abbott notes that the party is not against nuclear fusion — a technique that would fuse, instead of split, atoms to generate power. Nor does it oppose the use of GM organisms in research laboratories. However, the party vehemently opposes growing GM crops on a commercial scale, until its concerns about safety and the influence of large companies can be assuaged. “We think science plays an absolutely crucial role in society,” says Abbott, “but what we’re about is making sure that’s done in an ethical framework.”

The Green Party has one Member of Parliament in the outgoing government, and is targeting 11 more seats in the general election. The party says that it would not take part in a formal coalition government. 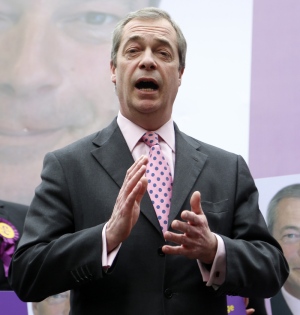 Best known for its goal to remove the United Kingdom from the European Union and introduce stricter policies on immigration, the UK Independence Party (UKIP) has an iffy record on science. Traditionally climate-sceptic, it attracted ridicule when a party member asked in a debate, “What happens when the renewable energy runs out?” — but later she said that she meant ‘renewable-energy subsidies’.

Ahead of the election, UKIP has found a more rational voice in parliamentary candidate Julia Reid, currently a Member of the European Parliament and UKIP’s science spokeswoman.

Reid has a PhD in pharmacology and is formerly a researcher at the Royal United Hospital in Bath. Although she is sceptical that climate change is man-made, UKIP’s policies on other issues seem crafted to appeal to scientifically minded voters. UKIP would scrap university tuition fees for science, mathematics and engineering students. And Reid told Nature that she is keen to see a “return to research for research’s sake” — although if the party had its way and the United Kingdom left Europe, it would also lose some €2 billion (US$3 billion) annually in grants from the European Union’s Horizon 2020 research programme.

Reid has also reassured scientists that the party’s proposals on immigration consist of a points system that would prioritize highly skilled workers, such as scientists. But no academic that Nature spoke to was convinced. “Even if you were eligible for a points scheme, the rhetoric of ‘not welcome here’ would deter people from applying,” says David Price, vice-provost at University College London. Anything that deters foreigners from studying in the country would also be damaging to the higher-education ecosystem overall, he adds, because the financial health of UK universities relies on fees from international students, who pay much more than do domestic students.

On immigration, the Scottish National Party (SNP) could not differ more from UKIP. “Scotland has a clear economic rationale for growing our population,” says an SNP spokesperson. The party sees immigration as a way to strengthen the Scottish economy, by growing the working-age population, she says. It would also support the reintroduction of a post-study work visa for international students, which was scrapped by the current UK government, an action that is widely blamed for a drop in university applications from abroad.

The SNP is likely to prove chief among the kingmakers. After narrowly losing a referendum on Scottish independence in September last year, its support is booming, while Labour support in Scotland has collapsed. That means the SNP might get as many as 50 of the 650 parliamentary seats in the House of Commons (it has just 6) and beat even the Liberal Democrats, now in fourth place according to most polls. Although the left-leaning SNP says that it would not work with the Conservatives, it is willing to work with Labour. But a point of friction would arise over the renewal of the United Kingdom’s nuclear deterrent, the Trident submarines based on Scotland’s west coast. The SNP is vehemently against the plans and the issue would be “fundamental” for the party in the event of no outright majority after May’s election, says the spokesperson.

The SNP is the only one of these three minor parties to have held any power, having run the partially autonomous Scottish govern­ment since 2007. “I felt that the SNP really understood the value of science, both in terms of economic value and the value in evidence-based policy making,” says Glover, who was chief scientific adviser to the Scottish government from 2006 to 2011. The party has championed Scotland’s ‘research pools’, which encourage collaboration between institutions, as well as innovation centres that bring together academia and industry. Both are widely praised by Scottish scientists (see Nature 513, 151–152; 2014). By 2020, the SNP ambitiously aims for Scotland to generate an amount of energy from renewable sources that is equal to its electricity needs. Like the Greens, the SNP does not support building nuclear-power stations. 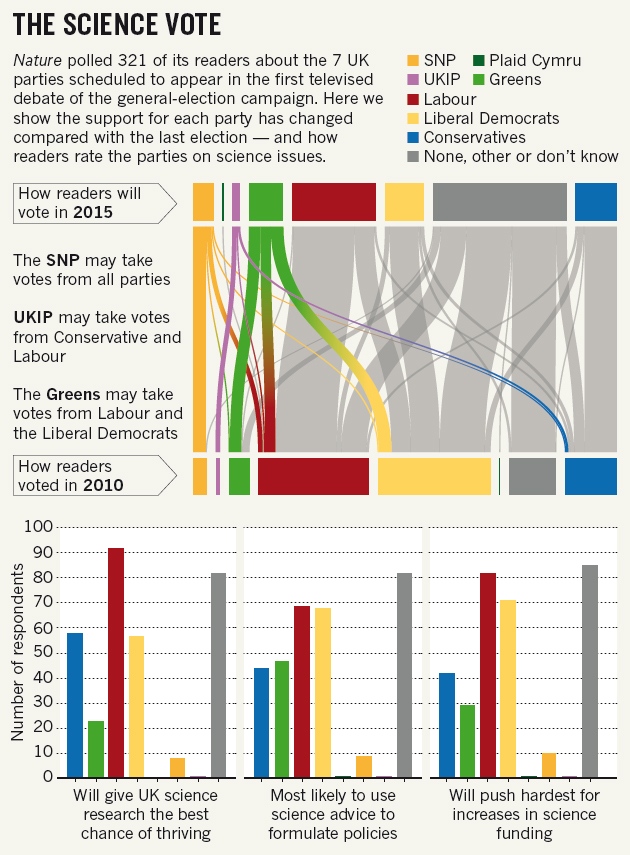