A bizarre episode from the cold war could foreshadow a new era of seabed mining. In 1974, the US government used a ship owned by eccentric billionaire Howard Hughes to pick up the remains of a Russian nuclear-missile-bearing sub­marine that sank in more than 5,000 metres of water. As cover, the United States claimed that the expedition was collecting polymetallic nodules: rocky lumps that litter the deep sea floor, rich in metals such as manganese, nickel, copper, cobalt and rare-earth elements.

It turns out that Lockheed, the US defence contractor that made the equipment used to grab the sub, had a real interest in the minerals. And last week, its London-based affiliate Lockheed Martin UK announced that it is to explore the harvest of nodules in the Pacific Ocean, 1,500 kilometres southwest of Mexico.

If it were to go ahead, the mining would be the culmination of decades of technological effort and exploration. “Lockheed Martin (US) in the end did more development and at-sea testing than any other company,” says Caitlyn Antrim, executive director of the Rule of Law Committee for the Oceans in Washington DC, and a deep-seabed-mining consultant. The venture could add £40 billion (US$60 billion) to the UK economy over the next 30 years, said UK Prime Minister David Cameron last week.

Cameron’s government sponsored Lockheed’s claim to the 58,000-square-kilometre potential mining site through the company’s subsidiary UK Seabed Resources in London. The International Seabed Authority in Kingston, Jamaica, which granted the exploration rights, has also granted claims in the region to several other countries, but work towards harvesting has been slow. The UK effort has advantages, says Antrim: Lockheed has proven technologies and the most nodule-bed data.

Polymetallic nodules form over thousands of years on the sea floor, through processes that are still not fully understood; most nodules range in size from the diameter of a golf ball to that of a large potato. Between the 1960s and the 1980s, various companies explored the possibility of harvesting them — but as metal prices fell, the prospect became economically unfeasible. In recent years, however, climbing prices and advances in deep-sea equipment such as remotely operated vehicles and flexible risers — pipes used to lift material — have revived interest. “It’s part of the art of the possible now,” says Miles Libbey, a former employee of Lockheed Martin US, and the founder of Seaminr, a seabed-mining consultancy in Urbanna, Virginia. 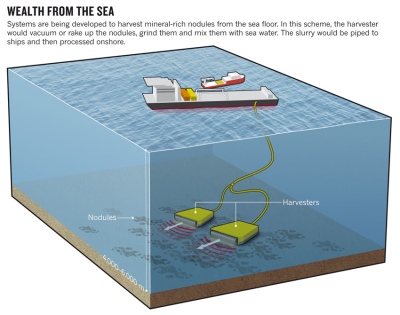 Harvesting nodules is technically easier than mining the mineral-rich remnants of non-active hydrothermal vents on the sea floor, a proposal that has also garnered attention (see Nature 447, 246–247; 2007). Nodules rest unattached, and often visible, in sea-floor sediments, so obtaining them would not entail grinding up rocky sea-floor crust. Lockheed has not released specific plans, but the general scheme for harvesting uses a device that moves along the sea floor, vacuuming or raking up nodules. The equipment would grind down the nodules to create a slurry that would be pumped to ships and then transported onshore for processing (see ‘Wealth from the sea’).

The most lucrative product would probably be nickel, which makes up only about 1% of the nodules but is used in everything from stainless steel to rechargeable batteries. Rare-earth elements are much less concentrated at around 0.1%, but will still be valuable: they are crucial for technologies in the aerospace and alternative-energy industries. China currently controls the vast majority of supplies.

Philip Rood, a spokesman for Lockheed Martin UK, says that it hopes operations can begin in 5–6 years, once Lockheed has completed technology tests and environ­mental studies.

Data are so far sparse on the degree to which the operations would threaten deep-sea life such as sediment-dwelling sea cucumbers, worms and small crustaceans, or creatures that live higher in the water column, such as fish. A study at a nodule plain off Peru found that sea-floor communities showed limited recovery after disturbance, with sediment dwellers gradually returning over 7 years (H. Bluhm Deep-Sea Res. II 48, 3841–3868; 2001).

Craig Smith, a deep-sea biologist at the University of Hawaii at Manoa, will lead an initial assessment of sea-floor life for Lockheed’s project, gathering baseline data for the potential harvest zone and comparison areas. “I think this is going to happen,” he says of nodule harvesting. “To manage the environmental impacts well we really need excellent information.”

Cindy Van Dover, director of the Duke University Marine Laboratory in Beaufort, North Carolina, has worked on assessments of deep-sea mining impacts. She says, “I don’t think there are red flags but I do think there are yellow flags.”

Her main concern is one of scale. “One tiny patch is not going to make any difference but what I can’t figure in my head is what happens when that’s multiplied.”