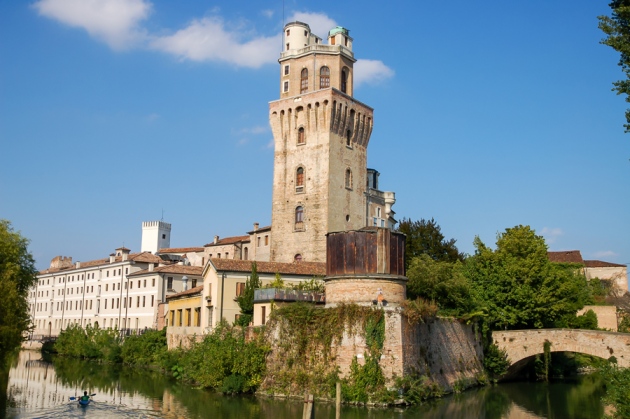 The medieval castle Castello Carrarese, in Padua, Italy, might host the headquarters of the world's largest radio telescope.

The world's largest radio telescope will be built in Australia and South Africa, and managed from somewhere in Europe. But just as the site of the dishes and antennas of the Square Kilometre Array (SKA) was a matter of intense political negotiation three years ago, so the placement of its headquarters is now stirring up disagreement among the project's 11 member countries.

The SKA's provisional headquarters is at the Jodrell Bank Observatory near Manchester, UK. Italy has offered instead to host it in a medieval castle known as Castello Carrarese, currently under restoration in Padua's city centre.

A meeting of the SKA's board of directors this week was expected to endorse the Italian site, after a report from an expert panel judged its bid superior. But the meeting failed to reach a decision. The United Kingdom instead convinced the SKA board that additional criteria need to be taken into account, says Giovanni Bignami, the president of Italy’s National Institute of Astrophysics (INAF), who represented Italy at the meeting.

The panel's selection of Italy surprised the United Kingdom, which had been confident that Manchester would be picked as the better location, says Bignami. The bid involved building a new facility to host SKA on the Jodrell Bank grounds in Cheshire, about 45 minutes' drive from Manchester. The observatory is home to the Lovell Telescope, which was the largest steerable radio dish in the world when it was built in 1955 and was instrumental in the discovery of quasars. Padua hosts the headquarters of INAF's Padua Astronomical Observatory as well as a university rated the best in the country.

As with the European Southern Observatory (which has its telescopes in Chile, but its headquarters in Garching, Germany), the SKA headquarters would manage policy areas such as allocating observation time on the instruments and making decisions on upgrades, says radio astronomer Avi Loeb, who heads the astronomy department at Harvard University in Cambridge, Massachusetts.

In its report, which has been seen by Nature, the expert panel wrote that both bids met or exceeded each of SKA's needs. But Padua has a larger community of astronomers than does the Manchester area, the report notes, and better access to hotels and restaurants. The Italian bid also provided clearer budget statements, the report said.

Loeb agrees that Padua has a stronger astronomy community overall, although he points out that when it comes to radio astronomy in particular, Manchester has a stronger tradition. “In a way, the fact that they postponed the decision is good, because it means that they are taking seriously all these considerations,” he says, adding that he would lean slightly towards Italy's bid — not least because of the food.

Philip Diamond, director-general of the SKA Organization at Jodrell Bank, says that although the SKA board hoped to reach a decision this week, “it was not guaranteed that there would be one”. He declined to comment on the details of the decision process.

A statement the SKA Organization released on 6 March said: “Two bids were received, from Italy and the United Kingdom, both of which were judged to satisfy all requirements of the project. In their meeting this week, the Members of the SKA Organisation discussed the two proposals and intend to reach a decision in a few weeks.”

SKA plans to have its permanent headquarters ready towards the end of 2017, the organization said in its statement. Construction for the SKA observatory, which will involve thousands of radio dishes and antennas spread over two countries, is scheduled to begin the following year. Its cost is expected to exceed US$2 billion.