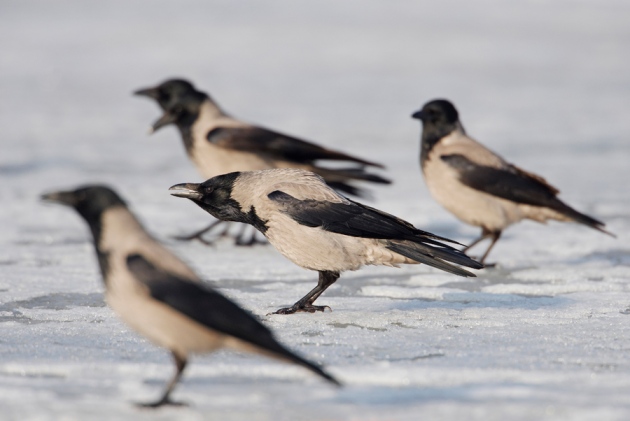 Hooded crows live mainly in eastern Europe, but interbreed with carrion crows from the west.

To the west, the skies belong to the carrion crow. To the east, the hooded crow rules the roost. In between, in a narrow strip running roughly north to south through central Europe, the twain have met, and mated, for perhaps as long as 10,000 years. But although the crows still look very different — carrion crows are solid black, whereas hooded crows are grey — researchers have found that they are almost identical genetically.

The taxonomic status of carrion crows (Corvus corone) and hooded crows (Corvus cornix) has been debated ever since Carl Linnaeus, the founding father of taxonomy, declared them to be separate species in 1758. A century later, Darwin called any such classification impossible until the term 'species' had been defined in a generally accepted way. But the definition is still contentious, and many believe it always will be.

The crows are known to cross-breed and produce viable offspring, so lack the reproductive barriers that some biologists consider essential to the distinction of a species, leading to proposals that they are two subspecies of carrion crow. In fact, evolutionary biologist Jochen Wolf from Uppsala University in Sweden and his collaborators have now found that the populations living in the cross-breeding zone are so similar genetically that the carrion crows there are more closely related to hooded crows than to the carrion crows farther west1.

Only a small part of the genome — less than 0.28% — differs between the populations, the team reports in this week's Science1. This section is located on chromosome 18, in an area associated with pigmentation, visual perception and hormonal regulation. It is no coincidence, the researchers suggest, that the main differences between carrion and hooded crows are in colouring, mating preferences (both choose mates whose colouring matches theirs), and hormone-influenced social behaviours (carrion crows lord it over hooded ones). 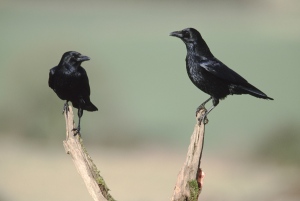 The carrion crows of central Europe are more closely related to hooded crows than to other populations of carrion crow.

The two crows could have diverged from a common ancestor after glacial periods pushed them into isolated southern enclaves, such as Italy and the Iberian Peninsula, Wolf says. When the ice sheet retreated, they spread across Europe and began to cross-breed again. Thus, the trend towards divergence was interrupted, and the populations again had the chance to merge.

Still, for at least 100 years and perhaps many thousands, the preference for mating within their own groups has been strong enough to keep the two populations distinct, Wolf explains. The level of mixing may now be relatively stable, he says, and it is “possible that the mate-choice-relevant parts of the genome will withstand gene flow for a long time”. If these regions do become swamped, he predicts that hooded crows will become more like carrion crows because carrions are the socially dominant birds.

Peter de Knijff, a geneticist at Leiden University in the Netherlands, takes the opposite view2. He says that the data show genes flowing mainly from hooded to carrion crows, making adoption of the hooded traits by German carrion crows “a fate that seems unavoidable”.

As to the question of whether the crows are distinct species, de Knijff fundamentally doesn't care. “I find any discussion about species concepts irrelevant, because these concepts are human inventions and only invented because of our anthropogenic desire to put everything into a neatly organized system,” he says. “For birds themselves (or any other organisms) this does not matter.”

And Wolf, too, says of the species issue, “I'd rather leave that to the taxonomists”.