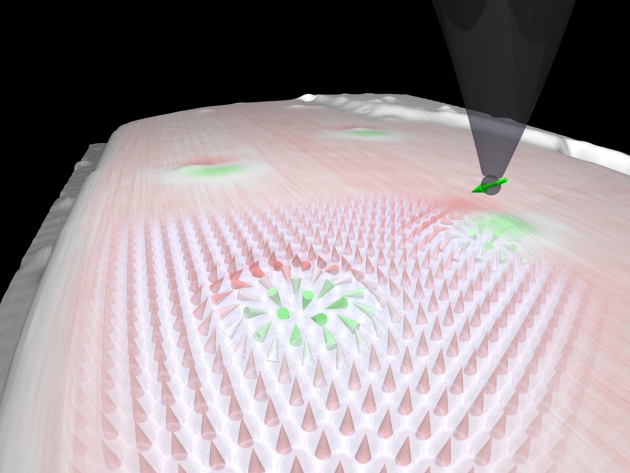 Twisted vortices in the magnetization of a metal surface — created or erased using the tip of a scanning tunnelling microscope (STM) — could provide a new way of recording data.

Tying knots in a piece of string is an age-old way of remembering things. Now physicists have succeeded in tying and untying microscopic magnetic vortices that may lead to more efficient computer memory.

The twisted vortices, known as skyrmions, are arrangements of atoms, with each atom acting like a bar magnet owing to a quantum property of its electrons called spin. An external magnetic field would normally tend to align all the atomic bar magnets in the same direction, but in the case of a skyrmion, the magnetization of the atoms is arrayed in a twisted vortex.

A skyrmion resists unravelling because magnetic perturbations can change the arrangement of the atomic spins but will not undo the twisting. This property, called topological stability, is shared by geometric objects such as the Möbius strip, a shape that can be obtained by joining the two ends of a ribbon together with a half-twist in between. The half-twist in a Möbius strip is 'stable' because it can be pushed around but not undone — short of cutting the ribbon, untwisting it and pasting it back again.

Topological stability is attractive to scientists looking for improved ways to carry information, says Kirsten von Bergmann, a physicist at the University of Hamburg in Germany. Conventional magnetic storage media, such as the surface of a hard disk, carry information in the form of digital bits — states denoted '0' or '1' that are represented by the magnetization of the atoms, for example with their magnetic north pole pointing up or down. But when they are packed too densely or overheated, these magnetizations can easily become unstable and get scrambled.

A skyrmion offers the chance to store information stably, so that it can be read off again as a '0' or a '1' depending on whether or not the magnetic knot exists. But for that to work, scientists must be able to create or erase magnetic skyrmions as needed.

But although the existence of skyrmions was predicted already in the 1960s (by British physicist Tony Skyrme) and has since been demonstrated in magnetic materials2, researchers have not been able to create and destroy them at will in a magnetic material — until now.

Writing in Science1, von Bergmann and her collaborators describe how they created skyrmions on a thin magnetic film of palladium and iron on an iridium crystal. They began with a sample in which all the atomic bar magnets were aligned. The team then used the tip of a scanning tunnelling microscope to apply a small current made up of electrons that had their spins aligned, or polarized, in a particular way. The polarized current interacted with the atomic bar magnets to twist them into knot-like configurations of skyrmions, each a few nanometres, or about 300 atoms, in diameter, says von Bergmann. The scientists could also use the polarized current to erase the knot, deleting the skyrmion.

Skyrmions appear and disappear as dark dots as the STM tip writes them and images them at the same time.

Theoretically, a skyrmionic device could hold 20 times more data per unit surface than current hard disks, von Bergmann says. However, she warns that the technology is a long way from practical applications. The team managed to create and delete a total of four skyrmions at a time (see video), but the technique worked in only about 60% of attempts, “which is very miserable for data technology”, says von Bergmann. And the researchers could control the skyrmions only at 4.2 kelvins, the temperature of liquid helium, which is not a practical operating temperature for electronic devices.

Nevertheless, this is the first time that scientists have created and deleted individual magnetic skyrmions, says Stefan Blügel, a solid-state physicist at the Jülich Research Centre in Germany. “By this experiment we can create skyrmions where and when we want them and that means we can imprint a one or zero in a controlled fashion,” he adds.

The exact mechanism by which the spin current twists and untwists the skyrmion remains unknown, says von Bergmann. Deciphering it will require further experiments and more theoretical models.