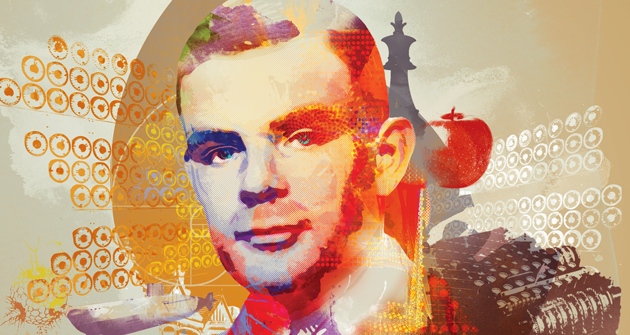 From the day he was born — 23 June 1912 — Alan Mathison Turing seemed destined to solitude, misunderstanding and persecution (see page 441). As his centenary year opens, Nature hails him as one of the top scientific minds of all time (see page 440). This special issue sweeps through Turing's innumerable achievements, taking us from his most famous roles — wartime code-breaker and founder of computer science (see page 459) — to his lesser known interests of botany, neural nets, unorganized machines, quantum physics and, well, ghosts (see page 562).

Everyone sees a different Turing. A molecular biologist might surprise you by saying that Turing's most important paper is his 1936 work on the 'Turing machine' because of its relevance to DNA-based cellular operations (see page 461). A biophysicist could instead point to his 1952 work on the formation of biological patterns — the first simulation of nonlinear dynamics ever to be published (see page 464).

Beneath it all, Turing was driven by the dream of reviving — possibly in the form of a computer program — the soul of Christopher Morcom, perhaps his only true friend, who died abruptly when they were both teenagers. I want to “build a brain”, he said. So does electrophysiologist Henry Markram (see page 456). But it is still a matter of debate whether machine intelligence should faithfully simulate neuronal circuitry, or just emulate brain function using whatever expedient (see page 462).

Even when Turing was kept busy by wartime code-breaking and the practical implementation of his universal computer, he never forgot that he had, in 1936, discovered something even bigger: the 'incomputable' world. Contemporary physics hasn't even started to work out the implications of that discovery (see page 465).

It is typical of Turing's brilliance and playfulness that even as he gave so many fields the tools that allowed them to blossom, he planted a concept that pushes science as we know it — physical reality and Newtonian causality—towards the abyss.