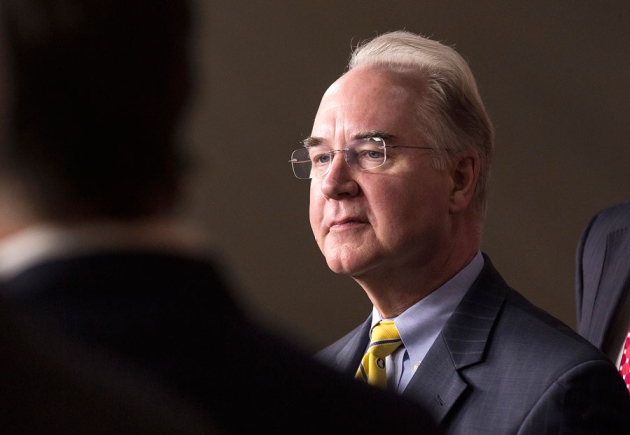 Tom Price, an orthopaedist, is US president-elect Donald Trump's choice to lead the Department of Health and Human Services.

Republican congressman Tom Price of Georgia is US President-elect Donald Trump’s pick to head the US Department of Health and Human Services. If he is confirmed by the Senate, Price would oversee the National Institutes of Health (NIH), the Centers for Disease Control and Prevention (CDC) and the Food and Drug Administration (FDA).

Price, an orthopaedic surgeon who heads the House of Representatives’ budget committee, is a staunch opponent of the Affordable Care Act, the health-care reform law known as Obamacare. Trump has said that repealing the law is one of his top priorities as president.

But Price’s stance on biomedical research issues is harder to parse. He has taken few public positions on science, but has consistently pushed to cut overall federal spending. Last year, he voted against a bill that would overhaul FDA regulations and provide US$8.75 billion in mandatory funding to the NIH over five years.

Price also opposes President Barack Obama’s proposed $755-million Cancer Moonshot, which seeks to double the pace of cancer research over the next decade. “We’re all in favour of increasing funding for cancer research,” Price told STAT News in January. “The problem that the administration has is that they always want to add funding on, they never want to decrease funding somewhere else. That’s what needs to happen.”

Jennifer Zeitzer, director of legislative relations at the Federation of American Societies for Experimental Biology in Rockville, Maryland, says that her conversations with Price and his staff suggest that he is at least a “generic” supporter of science. “My impression so far is he understands the NIH,” she says. “The issue will be convincing him that it’s a good agency to fund.”

But Georges Benjamin, executive director of the American Public Health Association in Washington DC, is much more concerned about Trump’s choice of Price. “He’s a physician — a very smart guy — and understands the value of research, but I question his commitment to invest in it,” Benjamin says.

Benjamin says that Price’s record in public-health policy is particularly worrying. In 2008, for instance, Price voted against allowing the FDA to regulate tobacco as a drug.

Price has also pushed to repeal the Public Health and Prevention Fund (PHPF), a roughly $1 billion to $2 billion fund provided yearly to the CDC to support public-health programmes. Owing to past budget cuts, the agency has used this money to bolster spending on existing programmes, such as research on lead toxicity. Price has criticized the PHPF as a “slush fund”, but Benjamin says that it has been essential for the agency. “Should he be confirmed, we’d be working very hard to try and change his mind to convince him that prevention is an important issue he should champion,” he says.

And Price has also consistently opposed embryonic stem cell research, saying in 2009 that Obama’s executive order to permit such research would “force taxpayers to subsidize research that will destroy human embryos”.

He has also supported numerous efforts to defund the reproductive non-profit healthcare group Planned Parenthood, an effort that intensified after videos produced by an anti-abortion group suggested that Planned Parenthood sold fetal tissue to researchers for profit. Several states have investigated that claim and found no evidence to support it.

Kevin Wilson, legislative director at the American Society for Cell Biology in Bethesda, Maryland, worries that both issues could become active again during the Trump administration. Still, Wilson is not discouraged that Trump has picked Price for HHS director. “The thing about Tom Price that I'm hopeful for — and I am hopeful — is that his past experience as an orthopaedist will inform him about the life of a biomedical researcher,” he says.