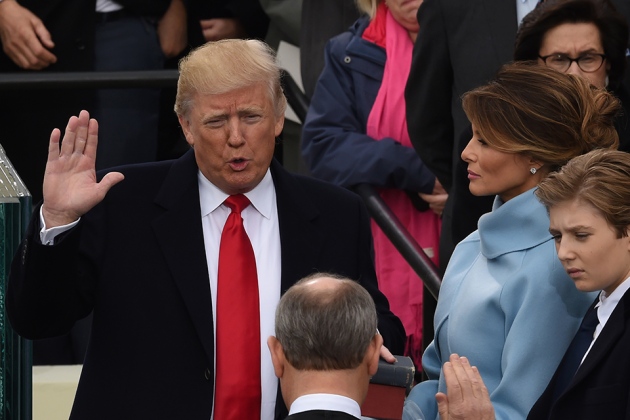 Donald Trump is sworn in as the United States' 45th president on 20 January 2017.

US President Donald Trump took office on 20 January, pledging to “unlock the mysteries of space, to free the Earth from the miseries of disease, and to harness the energies, industries and technologies of tomorrow”.

His early actions included publishing an energy plan that reiterates his campaign promise to repeal federal climate-change regulations, and freezing new or pending regulations on any topic until they can be reviewed by Trump administration officials. Among the policies that could be affected is the 'Common Rule' on human-subjects research; a revised version of the rule was finalized on 18 January, but has not yet taken effect. Also ensnared is the Fish and Wildlife Service's plan to put the rusty patched bumblebee (Bombus affinis) on the endangered species list, and several energy-efficiency regulations from the Department of Energy.

Trump’s inaugural speech, delivered from a platform overlooking Washington DC’s monument-filled National Mall, described a country in decline. The president’s pledge to reverse “American carnage” took a markedly different tone from the hopeful address of Barack Obama in 2009, when Obama delighted many scientists by pledging to “restore science to its rightful place”.

"The switch of focus to national borders, local concerns and short-term problems should give scientists cause for concern," says Jack Stilgoe, a science-policy expert at University College London, who is on sabbatical at the University of Colorado Boulder. "If 'America first' translates into techno-nationalism, then the world and its science will be worse off."

Others are still in wait-and-see mode. “In the science community there have been alarm bells, reports that the president has already launched a war on science,” says Tobin Smith, vice-president for policy at the Association for American Universities in Washington DC. “I think it’s way too premature to draw that conclusion.”

That did not stop scientists from joining protesters at massive rallies in Washington DC and other cities around the world to protest against Trump’s policies. Many said that they are concerned by Trump’s questioning of the science underlying climate change, and by his remarks suggesting a link between vaccination and autism.

Minutes after Trump took the oath of office, the White House website displayed the new president's 'America First' energy plan. “For too long, we’ve been held back by burdensome regulations on our energy industry,” the document says. “President Trump is committed to eliminating harmful and unnecessary policies such as the Climate Action Plan and the Waters of the U.S. rule.”

The Climate Action Plan is the collective name for regulations to reduce greenhouse-gas emissions and fight climate change that were put in place by the administration of the previous president, Barack Obama.

The Trump energy plan pledges to “refocus the EPA on its essential mission of protecting our air and water”. The EPA, or Environmental Protection Agency, regulates heat-trapping emissions from power plants, vehicles and other sources. It has been the key actor in Obama's climate plan.

Trump's strategy emphasizes fossil fuels, calling for greater development of US shale, oil and natural-gas reserves, and says the administration is “committed to clean coal technology”. But it does not mention renewable energy sources.

“Omitting renewable energy from the plan is churlish,” says Robert Socolow, a climate scientist at Princeton University in New Jersey. “It reads like score-settling.” Socolow adds that he was surprised that the plan also omits any mention of nuclear energy.

The focus on fossil fuels carries enormous risks for Trump, says Sam Adams, US director for the World Resources Institute, an environmental think tank in Washington DC. The president has promised to create jobs, but ignoring clean energy — one of the fastest-growing sectors in the US economy — could drive jobs overseas, Adams says, while worsening global warming.

"There lies, somewhere ahead in the path that they have taken, a political trip wire," Adams says. "The political accountability will rest with them, for failing to act."

For biomedical researchers, it is still unclear what the Trump administration will bring, despite the president's inaugural pledge to fight disease.

Does it matter if Donald Trump has a science adviser?

Still, Corb sees reasons to be hopeful — including the Trump team's decision, announced on 19 January, to retain National Institutes of Health director Francis Collins, at least temporarily. Collins was nominated to the job by former president Barack Obama and took office in 2009.

Still, Trump has said nothing serious about the agency or biomedical research in general. “We’re watching all our crystal balls, but they appear to be foggy,” Corb says.