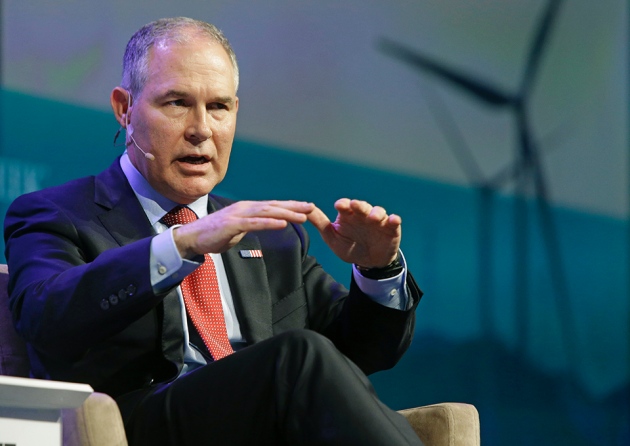 Scott Pruitt presides over an agency in flux.

The heat is on the US Environmental Protection Agency. President Donald Trump’s administration and Republicans in Congress have begun to reshape the agency’s policies on everything from climate change to the use of scientific data in policy-making.

On 9 March, Republicans on the House of Representatives’ Science, Space and Technology Committee approved bills that would bar scientists with current EPA grants from serving on agency advisory committees and require that all scientific data used to justify new regulations be made public. That would be a significant hurdle for an agency that often relies on data that is proprietary or must remain confidential to protect the privacy of participants in public-health studies. On the same day, EPA chief Scott Pruitt said that he does not believe that carbon dioxide is “a primary contributor” to global warming — contravening the longstanding scientific consensus.

“We don’t know that yet,” Pruitt said in a televised interview. “We need to continue the debate and continue the review and the analysis.”

The developments — along with leaked documents that suggest the White House will seek a 25% cut in the EPA’s budget for fiscal year 2018 — have put agency scientists on edge. One senior EPA official, who declined to be named because he was not authorized to speak publicly, says there is a void of reliable information within the agency. He and most of his colleagues are getting their information about the EPA’s future from press accounts. The situation is particularly difficult for young scientists, who have been asking him whether their postdoctoral fellowships will be extended — or whether they need to start looking for new jobs.

The unnamed official’s advice so far is simple: stay the course. “A lot of things can happen,” he says. “It’s way too early for people to start jumping out windows.”

Trump is due to release a budget outline next week for the 2018 spending year. A White House document leaked this week suggests that, along with seeking to slash the EPA’s overall budget, the Trump administration will also propose a sharp decrease in research funding and a 20% reduction in the agency’s staff of 15,000.

Although Congress has been friendly to Trump’s policies so far, the president’s first budget plan could still face challenges in the Senate, where Republicans hold a narrow majority. “Nobody is expecting an increase, but it’s not clear at all that these cuts will make it through Congress,” says Jeff Ruch, executive director of Public Employees for Environmental Responsibility, an activist group in Silver Spring, Maryland.

Then there are the legal battles looming. Environmentalists and some progressive states are gearing up to challenge the EPA as it rolls back environmental regulations. At the top of the list are two landmark climate regulations developed under former president Barack Obama: one, now on hold pending a lawsuit, would reduce emissions from power plants; the other, already in place, sets aggressive fuel-efficiency requirements for vehicles up to 2025.

“They want to roll back the rules, cut the budget and paralyse the institution,” says David Doniger, director of the climate and clean air programme at the Natural Resources Defense Council, an environmental group based in New York City. “This is going to be a long fight, but I think there’s a very good chance of blocking their moves so that a future administration can put Humpty Dumpty back together again.”

And there is the pair of bills approved on 9 March by the House Science, Space and Technology Committee — setting the stage for the full House to consider the measures.

Both bills are ostensibly intended to bolster science and transparency within the agency. One would prohibit the EPA from developing new regulations unless the underlying scientific data is made public. The second would require broader membership on the EPA Science Advisory Board, which critics say would clear the way for greater industry representation. It would subject the board’s reports to public review, prevent scientists who have current EPA grants from serving on the advisory board, and bar advisory-board members from seeking EPA funding for three years after their board service ends.

The science committee’s chairman, Republican Lamar Smith of Texas, says that an open and honest scientific process is “long overdue” at EPA. But environmentalists and scientists say that the two bills would make it harder for the EPA to solicit solid scientific advice and develop regulations.

In particular, the first bill would require the agency to make public all kinds of data, including health data that the EPA often doesn’t have the legal right to release, says Yogin Kothari, who tracks legislation for the Union of Concerned Scientists’ Center for Science and Democracy in Washington DC.

“The science that the agency relies on should be public, but you don’t need the underlying data,” Kothari says. “It really is a way to just prevent the agency from doing anything.”