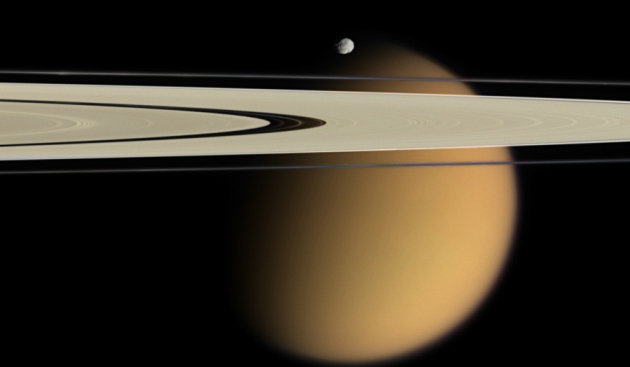 Saturn's moon Titan (orange, in background) seems to have lakes of methane near the equator, as well as at the poles.

Nestling among the dunes in the dry equatorial region of Saturn's moon Titan is what appears to be a hydrocarbon lake. The observation, by the Cassini spacecraft, suggests that oases of liquid methane — which might be a crucible for life — lie beneath the moon's surface. The work is published today in Nature1.

Besides Earth, Titan is the only solid object in the Solar System to circulate liquids in a cycle of rain and evaporation, although on Titan the process is driven by methane rather than water.

This cycle is expected to form liquid bodies near the moon's poles, but not at its dune-covered equator, where Cassini measurements show that humidity levels are low and little rain falls to the surface. "The equatorial belt is like a desert on Earth, where evaporation trumps precipitation," says astrobiologist Jonathan Lunine of Cornell University in Ithaca, New York.

Any surface liquid there should evaporate and be transported to the cooler poles, where it should condense as rain. "Lakes at the poles are easy to explain, but lakes in the tropics are not," says Caitlin Griffith, a planetary scientist at the University of Arizona in Tucson. Indeed, Cassini has spotted hundreds of lakes and three seas in Titan's polar regions.

Now Griffith and her colleagues think they have found a tropical lake — some 60 kilometres long and 40 kilometres wide, and at least 1 metre deep — in Cassini observations made between 2004 and 2008. It appears as a black splotch at seven near-infrared wavelengths that can travel relatively unimpeded through the moon's thick atmosphere, which blocks visible light.

The team also found four smaller, brighter splotches, which Griffith says may be "shallower ponds similar to marshes on Earth, with knee-to-ankle-level depths". Because tropical lakes on Titan should evaporate over a period of just a few thousand years, the researchers argue that these ponds and lakes are being replenished by subsurface oases of liquid methane.

That would expand the number of places on the moon where life could potentially originate. Methane, which is made up of one carbon and four hydrogen atoms, is the source of more complicated organic molecules found on Titan. "There may be organic chemical processes that occur in liquid hydrocarbons that could lead to compounds analogous to proteins and information-carrying molecules," says Lunine, who was not involved in the work. "There might be a kind of life that works in liquid hydrocarbons."

Lunine and Griffith are members of a proposed NASA mission to look for such complex chemistry, called the Titan Mare Explorer (TiME). The TiME probe would spend three months bobbing around Ligeia Mare, a sea near Titan's north polar region, measuring its chemistry with a mass spectrometer.

But should that mission, the fate of which will soon be decided by NASA, land on a tropical lake instead? No, says Lunine. He points out that a number of lines of evidence — including telltale radar signatures — show that the polar regions are filled with liquid hydrocarbon lakes and seas. So far there is less evidence for the tropical features. "Something else that just happens to be dark at those wavelengths", such as a solid organic compound, might mimic a lake, he says.

Only 17% of the equatorial region's surface area has been analysed at the high resolutions required to spot these small features, but Lunine says that lower-resolution observations suggest tropical lakes are relatively few and far between. Still, the idea of oases on Titan appeals to him. "There's a place on Titan named Xanadu, and if you go back to the Coleridge poem on Xanadu, he talks about 'caverns measureless to man',” Lunine says. He adds that he would love to find such caverns filled with methane on Titan.

The is story originally stated that Titan and Earth were the only bodies in the solar system to experience rain. While it also rains on the gas giant Jupiter, they are the only solid bodies to experience it. The text has been updated to reflect this.