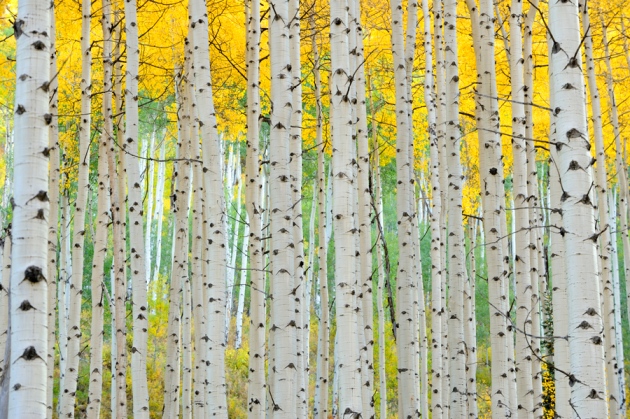 Poplars could be a source of cheap, renewable biofuels if their wood could be broken down to cellulose efficiently.

The poplars in the greenhouse near John Ralph’s laboratory show no outward signs of weakness, but they have a secret soft spot. Thanks to genetic engineering, their wood contains an artificial molecule that makes it more easily dissolved by chemicals. It is the latest approach to a problem that has occupied the pulp, paper and biofuel industries for the past two decades — how to reduce the amount of energy it takes to break down the plants’ woody biomass.

The first step in pulping trees for biofuel (or to make paper) is to get rid of lignin, a tough, resistant polymer that strengthens and supports wood and leaf vasculature. Dissolving lignin requires the use of concentrated chemicals at high temperatures, and releases sugar-rich cellulose, which can then be fermented to produce ethanol.

Reporting today in Science1, Ralph, a biochemist at the University of Wisconsin–Madison, and his colleagues explain how they have designed poplars to make a form of lignin that breaks down more easily than naturally occurring forms. “The potential for saving energy is so high that this change should be considered in every plant that’s destined to be pulped or converted to biofuel,” says Ralph.

Ralph’s work follows decades of research on plants bred or engineered to make easily digestible lignin, or to simply grow less of it. Field trials have taken place in Belgium, France, Brazil, the United States, Sweden and Spain, says Wout Boerjan, who researches plant biotechnology at Ghent University in Belgium, and has conducted field trials on genetically modified poplar trees. Tricks employed have included turning down genes involved in lignin biosynthesis or tinkering with the proportions of the various molecular building blocks (monomers) that make up the lignin polymer2.

But interfering with lignin biosynthesis can stunt a plant’s growth or make it flop3. Scientists are attempting various solutions — three weeks ago, for example, researchers led by Clint Chapple at Purdue University in West Lafayette, Indiana, reported in Nature that they could knock out three genes in thale cress (Arabidopsis thaliana), yet produce easily digestible lignin4. Their engineered plant has not yet been tested in field trials.

Richard Dixon, another lignin researcher at the University of North Texas in Denton, says that there are other problems with engineered lignin. “Some plants with modified lignin behave as though they are under attack from pathogens and pests, even though they are not,” he says. This defence response could occur because the modified lignin causes a plant’s cell walls to release material — mimicking an invader’s breach of a cell.

“You can’t guarantee that anything you do to a plant doesn’t mess up something or other,” agrees Ralph. He hopes that his approach avoids these complications. He and his team have introduced a gene that causes the poplar to churn out an artificial component for the lignin polymer. As this molecule is incorporated into the growing lignin chain, it forms a type of chemical bond called an ester, which can be broken up by some chemicals at mild temperatures. The modified poplars seem to be healthy, and they produce normal amounts of lignin. But the researchers have yet to prove that the trees can thrive outside a greenhouse.

The team has not yet worked out how much the genetically engineered poplars could cut the costs of biofuel or paper production, says Ralph, but they have filed patent applications for the work, and are talking to pulp and paper firms.

Meanwhile, other researchers are working on chemicals that dissolve natural lignin5. If they are successful, transgenic plants — which could face regulatory complications — may take a back seat. So far, no plants with modified lignin are being commercialized, says Leslie Pearson, director of regulatory affairs at ArborGen, a company based in Ridgeville, South Carolina, that has run field trials of engineered plants in the United States and Brazil. But the company Forage Genetics International, based in West Salem, Wisconsin, is developing a genetically modified alfalfa plant that produces less woody lignin — allowing farmers to harvest more biomass for hay. The company hopes to have the alfalfa on the market by 2016.