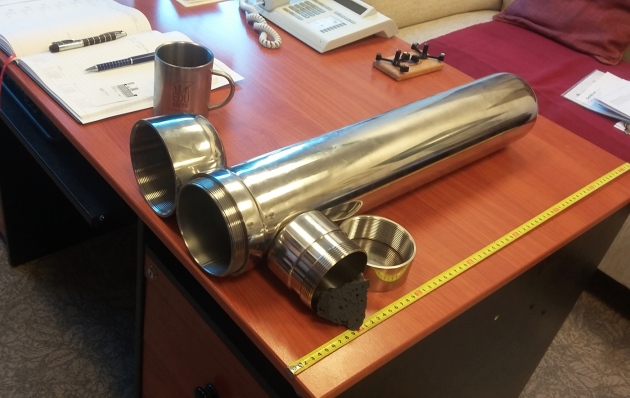 On an Arctic island, researchers have buried a stainless-steel tube stuffed with artefacts that they say sum up science and technology in 2017. The capsule, buried on 17 September, could remain in the ground for more than half a million years before it resurfaces as a result of geological uplift, sea-level rise and erosion.

Placed five metres deep in an out-of-use borehole near the Polish Polar Station in Hornsund, Svalbard, the 60-centimetre-long tube holds smaller containers with samples that include a fragment of a 4.5-billion-year-old meteorite, basaltic lava from an Icelandic volcano eruption and Namibian sand hiding particles of kimberlite and diamonds — all geared at informing a future discoverer of our present understanding of Earth’s geology.

To summarize biology, it includes dried DNA samples from humans, rats, salmon and potato, a bee in resin, seeds and around 300 tardigrades, the minuscule aquatic ‘water bears’ that can survive extreme radiation, drought and heat.

And to communicate to future historians the state of today’s technology, scientists packed into the tube silicon-based electronic devices, including accelerometers, a radiation detector and a mobile phone. They added a credit card, a wristwatch and a photograph, etched into porcelain for longevity, of Earth taken from space. Researchers also left their fingerprints on the inside of some of the container caps.

The message in a bottle was created to celebrate the sixtieth anniversary of Poland’s polar station, which was set up during the International Geophysical Year 1957-58, a research project that included a series of global geophysical activities.

“I wanted to create a memorial for the ages,” says Marek Lewandowski, a permafrost specialist with the Polish Academy of Sciences Institute of Geophysics in Warsaw, who selected the objects for the time capsule. Lewandowski, who thought up the idea in May, says that he consulted dozens of experts at Polish and foreign research institutes about the capsule’s inventory. The capsule is described in a manuscript published in the journal Gondwana Research1 on 28 September.

It’s a bit of a balancing act between jocular and serious science,” Lewandowski says. “But I do think it’s a good way to capture what we know today about the natural history of our planet and the evolution of life on it.”

The objects are nicely, if quirkily, chosen, says Jan Zalasiewicz, a geologist at the University of Leicester, UK. “They have put together a thoughtful and ingenious message for the far future,” he says, “But the few things in the capsule will be a drop in the ocean among the huge diversity of ‘techno-fossils’ that humans will leave behind as geology.”

Zalasiewicz adds that he thinks the capsule might resurface well before the half-a-million year estimate, because the chosen burial place is just a few metres above sea level, and marine erosion from sea-level changes are difficult to predict.

It’s not the first time that humans have designed a time capsule for distant civilizations to unwrap and decode. The Voyager Golden Record — phonograph records (together with a cartridge and a needle) on board the two Voyager spacecrafts launched in 1977 — contains 115 images, musical selections, natural soundscapes and spoken greetings to any extraterrestrials that might pick up the messages.

But chances are slim that Voyager’s snapshot of twentieth-century human culture, selected by a NASA committee, will ever be delivered and understood, says Lewandowski.

“Our own time capsule is sure to be found one distant day, and its discoverers will be able to grasp the message,” he says. “If they look carefully inside — like we did into the Cheops pyramid and the tombs and artefacts inside it — they will understand who we were.”