Data gathered by NASA’s Cassini probe as it repeatedly swept past Titan, Saturn’s largest moon, offers the best evidence yet that the smog-swaddled satellite has a substantial ocean of water sloshing beneath a thick icy crust.

During Titan’s 16-day orbit around Saturn, the distance between the moon and its planet ranges from slightly less than 1.19 million kilometres to almost 1.26 million km — a disparity that generates tides that flex the moon’s surface, says Luciano Iess, a planetary scientist at the Sapienza University of Rome. Estimates of the size of those tides and their effects can provide clues about the moon’s internal structure, he explains. 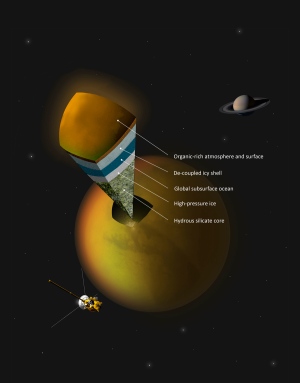 The latest model of Titan, Saturn's largest moon, hints at an ocean lying some 100 kilometres beneath the icy surface.

Since the Cassini probe began orbiting Saturn in July 2004, the craft has flown past Titan more than 80 times. For this study, Iess and his colleagues analysed how the moon's gravity caused Cassini to speed up as it approached Titan and then slow down as it receded during six of those flybys. Because Titan occupied different spots in its orbit during each flyby, the team of researchers could use the flyby data to discern subtle variations in the moon’s gravitational field as it moved through its orbit. These variations were brought about by changes in Titan's shape — which, in turn, were triggered by tidal flexing of the moon’s surface.

The team’s analyses suggest that the surface of the moon can rise and fall by up to 10 metres during each orbit, says Iess. That degree of warpage suggests that Titan’s interior is relatively deformable, the team reports today in Science1. Several models of the moon’s internal structure suggest such flexibility — including a model in which the moon is solid but soft and squishy throughout. But the researchers contend that the most likely model of Titan is one in which an icy shell dozens of kilometres thick floats atop a global ocean. The team's findings, together with the results of previous studies, hint that Titan’s ocean may lie no more than 100 km below the moon’s surface.

“This is an exciting result that puts Titan firmly in the group of large satellites with oceans,” says Robert Pappalardo, a planetary scientist at NASA’s Jet Propulsion Laboratory in Pasadena, California. Previously, scientists have inferred the presence of oceans beneath the icy surfaces of several satellites in the outer Solar System, including Enceladus2, which is another Saturnian moon, and Europa3, which orbits Jupiter.

Tidal flexing of Titan’s icy crust wouldn’t provide enough heat to keep the subsurface ocean liquid, says Jonathan Lunine, a planetary scientist at Cornell University in Ithaca, New York, and a co-author of the study. But the energy released by the decay of radioactive elements in the moon’s core, the chemical reactions that dehydrate many of the silicates there, and the small amounts of ammonia that may taint the ocean would help keep it from freezing, he notes.

However, such tidal flexing could serve as an explanation for why methane is present in Titan’s atmosphere, even though the gas is usually destroyed by chemical reactions driven by sunlight, says Lunine. Deposits of methane-rich ice in the upper portions of Titan’s crust could be warmed enough by the flexing to release the gas, thereby replenishing the moon’s atmospheric concentrations of the gas. This would then fall as rain into methane oceans and lakes on the surface.

“But that’s just one idea, because scientists haven’t measured near-surface concentrations of methane [on Titan] yet,” Lunine notes. “There’s no smoking gun for where it comes from.”

That evidence could soon be at hand. The Titan Mare Explorer (TiME) mission, one of three candidates now being considered by NASA for launch later this decade, would drop a floating, instrument-laden capsule into one of the large methane seas in Titan’s northern hemisphere to study the chemical and physical processes taking place there. "So far, we've only seen things during flybys," says Lunine.