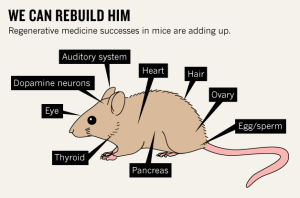 A series of achievements have stoked excitement about the potential of regenerative medicine, which aims to tackle diseases by replacing or regenerating damaged cells, tissues and organs. A paper in Nature today1 reports another step towards this goal: the generation of working thyroid cells from stem cells.

Sabine Costagliola, a molecular embryologist at the Free University of Brussels, and her team study the development of the thyroid gland, which regulates how the body uses energy and affects sensitivity to other hormones. Their research shows that thyroid function can be re-established even after the gland has been destroyed — at least in mice. If the same technique could be applied to humans, it would help the roughly 1 in 3,000 babies born with deficient thyroid activity, or hypothyroidism, which can result in stunted physical and mental development.

The thyroid is the latest in a growing list of body parts that can now be ‘fixed’ in mice, with the potential to treat diseases from diabetes to Parkinson’s (see 'We can rebuild him'). “Progress has been very rapid over the past decade,” says Charles ffrench-Constant, director of the MRC Centre for Regenerative Medicine at the University of Edinburgh, UK. “In recent years we’ve seen a number of very important studies in which mouse stem cells have been converted to a desired cell type that has then been shown to be functional in vivo, and to confer benefits in mouse models of human diseases.”

Costagliola and her colleagues first genetically engineered embryonic stem cells to express two proteins — NKX2-1 and PAX8 — that are expressed together only in the thyroid. When these cells were grown in Petri dishes in the presence of thyroid-stimulating hormone, they turned into thyroid cells.

Thyroid cells, however, have to be organized into a particular three-dimensional shape before they can work. They need to form small, spherical follicles containing a cavity in which iodide — a component of some hormones produced in the thyroid gland — can be concentrated before being absorbed and used for hormone synthesis.

Remarkably, the stem-cell-derived thyroid cells spontaneously grouped into follicles similar to those in an intact thyroid gland. And Costagliola and her colleagues found that the follicles were able to trap iodide and synthesize thyroid hormones. “When started the project, our hope was to get some cells that could be used to study thyroid physiology,” says Costagliola. “We never expected to get thyroid follicles.”

The next step was to see how these follicles would function in live mice, and to assess their potential to correct hypothyroidism. This condition was induced in mice with an injection of radioactive iodine that accumulated in their thyroid glands, causing the tissue to wither away. Four weeks later, once hypothyroidism had been established, the mice received a graft of stem-cell-derived thyroid follicles. Out of nine mice treated in this way, eight showed complete rescue — their thyroid hormones returned to normal levels.

As with much recent work in regenerative medicine, the next challenge is to translate this to humans, says ffrench-Constant. This prospect has been made easier in recent years by research that was recognized this week with a Nobel prize: the demonstration by Shinya Yamanaka of Kyoto University in Japan that adult skin cells can be reprogrammed to form stem cells capable of differentiating into a wide range of cell types (see 'Cell rewind wins medicine Nobel').

Francesco Antonica, a molecular embryologist in Costagliola's lab and a co-author of the latest paper, says that the team plans to use such induced pluripotent stem cells, derived from patients with hypothyroidism, to try to replicate the mouse results in humans.