Adding to its already long roster of firsts, NASA's Kepler spacecraft has found the three smallest extrasolar planets ever detected — all of them smaller than Earth, and the most diminutive no larger than Mars. The newly discovered trio forms a miniature planetary system orbiting a cool, dim red dwarf star called KOI-961. 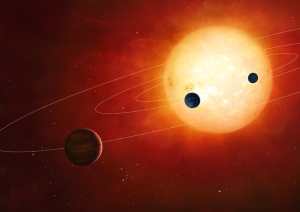 Artist's rendering of a hypothetical planetary system around a Sun-like star. NASA Kepler researchers have now spotted a similar system.

Because they are so close to their star, the three exoplanets are too hot to support life. But unlike most previously known exoplanets, the vast majority of which are Jupiter-scale gas giants, all three are thought to be rocky worlds like Earth and the other worlds of the inner Solar System. And because red dwarfs are the most common type of star in the Milky Way, the finding suggests that the Galaxy may be teeming with rocky planets — with at least some residing in the 'habitable region' around those stars, where the temperature would be just right for water to remain liquid and life might have got a foothold.

“We need to get a census of how many rocky planets are out there to understand how Earth formed, and how common life may be in the Milky Way,” notes Sara Seager, an astronomer at the Massachusetts Institute of Technology in Cambridge who was not part of the latest study. The discovery bodes well for fulfilling that quest, she adds.

“The suggestion — but not proof — is that rocky planets are common and diverse, and that our Solar System is not some cosmic quirk composed of weirdo worlds,” agrees study collaborator Geoffrey Marcy of the University of California, Berkeley.

The Kepler findings were presented on 11 January at the semi-annual meeting of the American Astronomical Society (AAS) in Austin, Texas, by John Johnson and Philip Muirhead of the California Institute of Technology in Pasadena1,2. A paper describing the discovery has been accepted by the Astrophysical Journal3.

Kepler hunts for planets by monitoring a field of some 150,000 stars in search of a subtle, periodic dimming — a sign that an orbiting body is passing, or transiting, in front of a star, blocking a tiny fraction of light. Most of the stars Kepler examines are similar in mass to the Sun, but some are considerably smaller — including one, a red dwarf star some 40 parsecs (130 light years) away from Earth, that was among the stars flagged as a candidate for possessing one or more planets.

Dubbed KOI-961, for “Kepler Object of Interest”, the red dwarf came under close scrutiny by the researchers. Muirhead realized early on that the Kepler mission team, which concentrates on finding planets around Sun-like stars, had overerestimated the brightness and size of the much smaller red dwarfs, which are notoriously difficult to model4. On average, the red dwarfs' diameters turned out to be only about half the values listed in Kepler's official star catalogue. And for KOI-961, in particular, the diameter had to be revised downwards even further: its actual size is only about one-sixth that of the Sun.

The revised estimate for the diameter of KOI-961 was crucial to discovering the latest trio, because the size of any transiting planets found by Kepler are measured only relative to the size of their parent star. The tinier the star, the tinier the transiting planet that can be detected. An essential clue came from a fortuitous e-mail that Johnson received last September from Kevin Apps, an amateur astronomer in Horley, England. Apps, a co-author on the Astrophysical Journal paper3, spends his spare time studying the data on extrasolar planets and nearby stars, and he has an encyclopaedic knowledge of their properties. He alerted the rest of the team that KOI-961 bore an uncanny resemblance in colour and temperature to a well-known dwarf called Barnard’s Star. Follow-up observations with ground-based telescopes confirmed that the two stars were virtual twins. And because the size of Barnard’s Star has been very precisely measured, thanks to its location only 1.9 parsecs (6 light years) from Earth, Johnson’s team could gauge the diameter of KOI-961 — and therefore its transiting planets — with high precision.

At the AAS meeting, the discovery team announced that all three planets orbiting KOI-961 whip around the star in less than two days. The outermost body is the tiniest, with a diameter half that of Earth, or about the same as Mars, and a temperature of about 400 degrees Celsius. The inner two planets are larger, with diameters about three-fourths that of Earth. But that is still smaller than Venus. Because the planets are all small and close to their star, much of the atmosphere they may once have had would have evaporated, leaving behind bare rock, Marcy says.

Marcy calculates that Kepler could find planets around dwarf stars that are even smaller — with a diameter only 20% that of Earth, smaller than our Moon.

Finding a multitude of rocky, Mars-sized exoplanets may help shed light on a long-standing problem in understanding the formation of the inner Solar System, comments Dimitar Sasselov, an astronomer at the Harvard-Smithsonian Center for Astrophysics in Cambridge, Massachusetts, who was not part of the study. Scientists have no clear explanation for why Mars, which lies outside the orbits of Venus and Earth, is so much smaller than its siblings.

The diminutive planetary trio is just the latest in a flurry of discoveries by Kepler. In December, researchers reported that the orbiting telescope had found the first known Earth-sized planets beyond the Solar System, although these bodies were also too hot for water to exist on its surface5. Scientists also reported last month that the craft had found its first exoplanet in the habitable zone — although in that case, the orb is much bigger than Earth6.

The new findings demonstrate that “Kepler is surely robust at finding truly Earth-sized planets,” says Marcy. The next goal, he notes, is the mission’s reason for being: “ to find an Earth-sized planet that is lukewarm, where water would be in liquid form to host biology.”