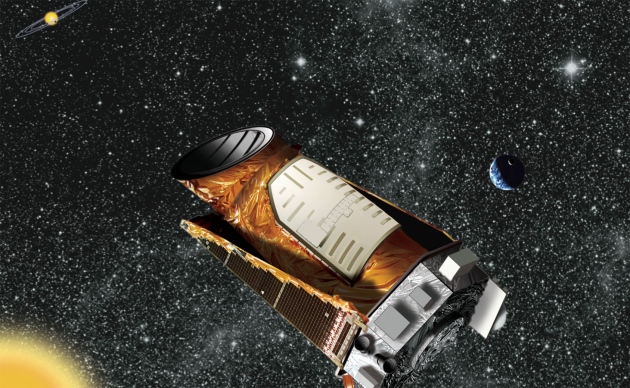 NASA’s crippled Kepler spacecraft has scored a major discovery in its second life. Using data from the first 80 days of Kepler's K2 mission, astronomers have discovered three planets just a little bigger than Earth orbiting a star near the Sun1.

One of the planets lies within the star’s 'habitable zone', where water could exist. That makes it one of the most interesting systems among the 1,000-plus planets discovered by Kepler, and by far the most significant discovery from the K2 portion of the mission.

“This is certainly the most exciting system to come out of it so far,” says Ian Crossfield, an astronomer at the University of Arizona in Tucson. “The mission isn’t over by any means.”

Crossfield and his colleagues posted their findings on the arXiv.org preprint server on 16 January. The system that they report is different than the rash of new Kepler planets announced last week at an astronomy meeting.

All three newfound planets orbit an M-dwarf star, which is smaller and cooler than the Sun. They are all closer to their star than Mercury is to the Sun, but because the star is so cool its habitable zone is correspondingly smaller. “The outermost planet is kind of like Earth or Venus in terms of how hot it would be, the second is more like Mercury, and the innermost planet is hotter still,” says Crossfield.

The planets take between 10 and 45 days to orbit their star. They range from 1.5 to 2.1 times the size of Earth, suggesting that they are rocky like Earth rather than gassy like Jupiter. The star, known as EPIC 201367075, lies about 46 parsecs from Earth in the constellation Leo.

Doug Caldwell, an exoplanet astronomer at NASA's Ames Research Center in Moffett Field, California, says the data look convincing. "If these planets do bear out," he says, "they are the first of the important discoveries that we are hoping for from K2 — nearby habitable zone planets around relatively bright stars."

Kepler was sidelined in May 2013, when the second of four reaction wheels that help the spacecraft orient itself failed. The mission was revived last year as K2. Because the spacecraft cannot point itself particularly well now, K2 can stare at stars for only 80 days at a time, not the 4 years of the first Kepler mission. Like the original, K2 is watching for slight dips in starlight as planets move across the faces of stars and block their light as seen from Earth.

The newfound planetary system comes from the first 80 days of K2 coverage, Crossfield says. The astronomers followed up the discovery using ground-based telescopes in Hawaii, California and Chile.

Barring disaster, K2 is expected to continue for several more years, with many more exoplanet systems to come.