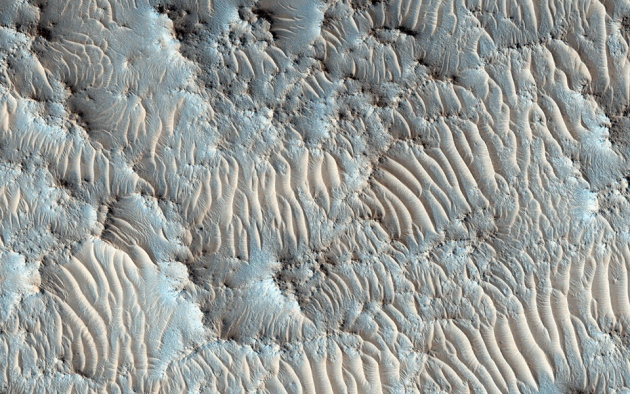 Jezero crater, once home to an ancient lake, could yield the first Martian rock samples to reach Earth.

The future of NASA's Mars programme is taking shape. The agency has narrowed — from eight to three — the list of potential landing sites for its 2020 rover, which will scoop up Martian rock and soil in the hope of one day returning them to Earth.

NASA shortlisted the sites on 10 February, at the end of a three-day workshop in Monrovia, California to hash out where the spacecraft will go. The final decision, due a year or two before launch, will be one of the most momentous in Mars exploration. The rocks that the Mars 2020 rover collects are likely to dictate the scientific questions that will be tested for decades to come.

“What if this is the only set of samples that we ever return from a known place on Mars?” asks Briony Horgan, a planetary scientist at Purdue University in West Lafayette, Indiana. Until now, the only Mars rocks that researchers have studied are meteorites, which reach Earth stripped of their original geological context.

The three landing sites still in contention include Jezero crater, which was once home to an ancient Martian lake and which could preserve the remains of microbial life, if that ever existed on Mars. “You've got a large river bringing water and sediment into a very large lake, comparable to Lake Tahoe,” says Timothy Goudge, a planetary scientist at the University of Texas at Austin. Jezero scored highest on a community vote of scientists attending the workshop.

Other possible targets are Northeast Syrtis, where hot waters once circulated through the crust and could have supported life, and Columbia Hills, the area explored for years by NASA's Spirit rover.

Unlike Jezero and NE Syrtis, Columbia Hills did not score highly in the community vote. And in another advisory report this week, a group of scientists on the 2020 project explicitly recommended against revisiting the site. That report argued that sending the 2020 rover to Columbia Hills was unlikely to resolve confusion over whether its silica rocks, which resemble hydrothermal deposits on Earth, could be linked to life.

But Matthew Golombek, a planetary scientist at the Jet Propulsion Laboratory in Pasadena, California, says that Columbia Hills, like Jezero and NE Syrtis, presents a prime opportunity to explore possible past Martian life. The 2020 rover will carry scientific instruments that could tackle questions about the silica rocks there better than Spirit could, he says.

NASA plans to send a rover to Mars in 2020 to collect the first rock samples ever taken from the red planet. A prototype of that rover drives through testing grounds at the Jet Propulsion Laboratory in Pasadena, California.

“It's the only location on Mars that we know of that had a hot spring,” says Golombek, who co-chairs the site-selection process. He noted that Columbia Hills also has a variety of other geological features nearby, such as an ancient lava flow from which samples could be dated to provide a much-desired absolute age for Martian rocks.

The Columbia Hills choice is likely to be controversial. Horgan says that she is “disappointed” that the site-selection committee went against the recommendations of the workshop and the advisory panel on Columbia Hills, although she is happy about the Jezero and NE Syrtis picks.

NASA wants a landing site where water once flowed, to increase the chance that the rover will discover evidence of any past life — such as organic compounds, biomarker molecules or even microfossils. But the site should also be easy to traverse, because the rover will need to begin drilling quickly to collect at least 20 rock samples in roughly two years. “We have to be able to get to the stuff,” Abigail Allwood, an astrobiologist at the Jet Propulsion Laboratory, told the meeting.

That requirement, along with other challenges, knocked Holden crater off the list of possibilities. The rover would have had to drive large distances around that site to collect different types of geological samples. And as the southernmost location on the longlist, it would have exposed sample tubes to strong sunlight and high temperatures, which could have compromised future tests.

Also out of the running is Eberswalde crater, which scored third in the community vote but is also far south and gets quite hot, Golombek says. Jezero crater offers the same sort of ancient-lake environment without the risk posed by high temperatures, he argues. And the community’s fourth choice of Mawrth Vallis, although rich in clays, is not as clearly connected to a possibly once habitable environment, he says.

Nili Fossae, where an orbiting spacecraft had seen methane rising from Mars, and Southwest Melas, another ancient lake, also fell off the list. Neither scored as highly as the top candidates for the potential for science return.

NASA has neither designed nor budgeted for how to get the Martian rock samples back to Earth. So the 2020 rover will drill and collect the samples, then lay them down on the Martian surface for an as-yet-unplanned mission to retrieve.

The European Space Agency is launching its own Mars rover in 2020, to Oxia Planum. China also plans to send one that year, when the alignments of Earth and Mars are favourable for launching missions between the two.