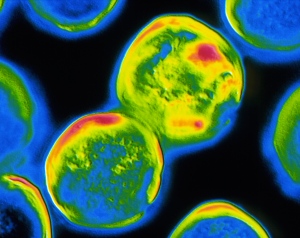 A new estimate has radically shrunk the number of microbes living beneath the sea floor.

The ocean floor is home to a staggering 2.9×1029 single-celled organisms — that's 10 million trillion microbes for every human on the planet — but vast though it is, this figure is only 8% of the previous estimate of 35.5×1029. Geomicrobiologist Jens Kallmeyer and colleagues at the University of Potsdam in Germany have created the most accurate model so far of the geographical distribution of microbes in marine sediment. Their work is published today in the Proceedings of the National Academy of Sciences1.

“For ten years everyone’s had the sneaking suspicion those numbers were wrong,” Kallmeyer says, referring to a 15-year-old estimate of the numbers of microbes at the bottom of the oceans2 by geomicrobiologist William Whitman at the University of Georgia in Athens. In recent years, Kallmeyer and his colleagues have amassed new data by drilling holes in the sea floor to study microbes surviving at the extremes of nutrient starvation. They used these data to create global maps that could more accurately predict the biomass hidden in kilometres of ocean sediment. The new calculations decrease previous estimates by 92%, and reduce the estimated numbers of all microbes on Earth by around 50%, to between 9.2×1029 and 31.7×1029. But, says Kallmeyer, "their still gigantic number means that they play a key role in global biogeochemical cycles".

The previous estimate was probably too high as it was based on work in nutrient-rich coastal upwelling zones, which, says Kallmeyer, would have led to an overestimation of the number of microbes. In contrast, much of Kallmeyer’s research has been in areas he refers to as “the deserts of the sea”, such as the the South Pacific Gyre, one of the most nutrient-depleted regions in the ocean.

Geomicrobiologist Kai-Uwe Hinrichs at the University of Bremen, Germany, is currently on an expedition to look for life at a greater depth than anyone has done previously. He says that, compared to previous papers, Kallmeyer’s team "have done a better job of estimating the sheer volume of the marine sediment biomass". This is because, when they calculated how much carbon is present in the sediment microbes, they took into account the fact that the cells surviving here are so starved of energy that they rarely do anything for hundreds or even thousands of years. Whitman's estimate had presumed that all microbes on Earth were similar to those in a laboratory culture, which Kallmeyer describes as “very happy cells that grow big and fat”.

But geomicrobiologist John Parkes of Cardiff University in the United Kingdom thinks that Kallmeyer's calculation may be on the low side because of the difficulties associated with counting small numbers of cells encased in sediment. He also points out how microbes are continually proving that they can push the limits at which life can be maintained to further extremes. Kallmeyer acknowledges that his calculations are only as good as the data and the assumptions he used to make them. He says he hopes that in 20 years he will see someone else improve on his work just as he has done with Whitman's, of which he says “without his paper the whole area of deep-biosphere research would not be where it is today”.