Forensics guidelines On 3 June, for the first time, the US Justice Department issued recommendations meant to help to guide expert testimony and lab reports in forensic science. If adopted, they would apply to all agencies that issue forensic reports and would cover seven disciplines, including body-fluid testing, fingerprints and toxicology. The department will issue further guidelines later in the summer regarding genetic testing and several other forms of forensic evidence.

Policy labours lost An independent inquiry published on 2 June found that most UK government departments don’t keep track of the policy-linked research that they have paid for in areas such as health, education or climate change. Only 4 out of 24 government departments contacted through freedom-of-information requests keep a centralized database of commissioned research, according to Sense About Science, the London-based science-advocacy group that commissioned the inquiry. The report also points to several cases in which the publication of sensitive findings — including on drug use and immigration — was delayed owing to political concerns. See page 164 and go.nature.com/1sqhudo for more. 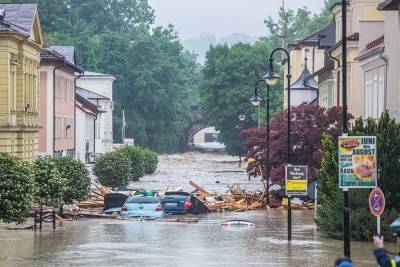 Extreme weather rocks Europe Severe storms and heavy rain caused havoc last week in parts of Western and Central Europe. On 1 June, a flash flood triggered by extreme downpours devastated the town of Simbach am Inn in southern Germany, killing 7 people and causing damage across the region in excess of €1 billion (US$1.1 billion). In Paris on 3 June, the River Seine’s rising floodwaters led authorities to close the Louvre and Orsay museums and move artworks to safety. And on 4 June, Germany’s largest rock festival, near Mendig, was aborted after lightning struck at least 80 visitors. Because warmer air holds more moisture, rising temperatures are increasing the odds of intense precipitation. Worldwide, record-breaking rainfall events have been on the rise over the past 30 years.

Campus murder On 1 June, an armed 38-year-old man entered the engineering department at the University of California, Los Angeles (UCLA), and fatally shot William Klug, a mechanical and aerospace engineering professor. Police think that the killer, who received his doctorate with Klug’s guidance in 2013, then shot himself. The authorities have not confirmed a motive for the murder–suicide, but stated that the gunman had accused Klug of stealing his computer code and giving it to someone else. Investigators found a ‘kill list’ in the gunman’s Minnesota home that included Klug, another UCLA professor (who was unharmed) and a woman whom police subsequently found dead in a Minnesota suburb.

Pure gravity The European Space Agency’s LISA Pathfinder team announced on 7 June that its mission to test technology for a space-based gravitational-wave detector has been a success. Results from the first two months of operation showed that two metal cubes housed in the spacecraft were under free-fall through space, affected almost solely by gravity, with perturbations kept five times lower than required. A full-scale observatory, which will use similar cubes in spacecraft placed millions of kilometres apart to measure passing gravitational waves, is scheduled for launch in 2034.

Brazilian anger Brazil’s science ministry will not be reinstated, despite researchers’ protests, the country’s government says. The ministry was merged with the telecommunications ministry by interim President Michel Temer, who took office in May after the impeachment of Dilma Rousseff (see Nature 533, 301; 2016). In the past week, scientists — already angry at massive budget cuts — have taken to the streets in Natal, Rio de Janeiro and São Paulo to protest against the merger. But Gilberto Kassab, who heads the science–telecomms ‘superministry’, has told Nature that the merger will be maintained.

Stem-cell setback The biopharmaceutical company StemCells of Newark, California, has prematurely terminated a phase II clinical trial examining whether cells derived from fetal brains could help to fix damaged spinal cords and increase muscle strength in paralysed limbs. Interim analysis of the 17 people treated so far showed no significant improvement, even though experiments in mice with spinal damage had been positive. The company is planning to close down its operations. Other trials of stem-cell preparations to treat spinal-cord injury are continuing.

Shared data The US National Cancer Institute (NCI) unveiled a platform for sharing genomic and clinical data on 6 June at the annual meeting of the American Society of Clinical Oncology in Chicago, Illinois. The platform, called the Genomic Data Commons, will be a key component of US vice-president Joe Biden’s National Cancer Moonshot and President Barack Obama’s Precision Medicine Initiative.

Kavli Prize On 2 June, nine scientists were awarded the 2016 Kavli Prize, a biennial award that honours individuals for seminal advances in astrophysics, nanoscience and neuroscience. This year’s laureates come from Germany, Switzerland, Britain and the United States. The co-founders of the Laser Interferometer Gravitational-wave Observatory (LIGO), Ronald Drever, Kip Thorne and Rainer Weiss, won for the detection of gravitational waves. Gerd Binnig, Christoph Gerber and Calvin Quate were recognized for their development of atomic-force microscopy. Eve Marder, Michael Merzenich and Carla Shatz won for the discovery of key brain mechanisms. Recipients from each category shared a US$1-million cash prize.

Courage to think Egyptian students and scholars wrongfully detained in their home country are being honoured on 9 June with the ‘Courage to Think Defender Award’ by academic-freedom advocates Scholars at Risk. The group cites an “overwhelming crackdown” in recent years on Egypt’s higher-education community, including “reported use of violence, wrongful prosecutions and imprisonment, professional retaliation and travel restrictions against scholars and students across the country”. According to data obtained by the Egyptian human-rights group Association for Free Thought and Expression, more than 2,000 university students and professors in Egypt have been detained by security forces since July 2013. 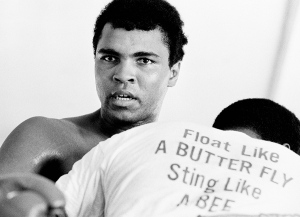 Tribute to Ali Millions of admirers, including US President Barack Obama, are mourning the death of Muhammad Ali (pictured) — legendary boxer, political activist and, in his later years, advocate for Parkinson’s disease research. The three-time heavyweight champion died on 3 June, aged 74, having lived for more than 3 decades with the degenerative brain disease. In 1997, Ali co-founded the Muhammad Ali Parkinson Center, a research and treatment facility in Phoenix, Arizona.

Novartis Shanghai The pharmaceutical giant Novartis opened an extensive campus in Shanghai, China, on 2 June. The campus hosts the third major site of the Novartis Institutes for Biomedical Research (NIBR), where around 300 scientists will use epigenetic approaches to develop treatments for cancers and other diseases that are prevalent in China and Asia. The other two main NIBR campuses are in Cambridge, Massachusetts, where research includes cancer, cardiovascular disease and diabetes; and in Basel, Switzerland, which focuses on autoimmunity, transplantation and inflammation.

Solar power in Cuba A British solar company, Hive Energy, has secured a contract to build the first utility-scale solar power plant in Cuba. On 3 June, the company, based near Southampton, announced plans to complete a 50-megawatt solar-power project by 2018 in a free-trade zone in the Cuban port city of Mariel. The project is one of many that the Cuban government committed to pursuing under the 2015 Paris climate agreement.

Global power-generating capacity from renewable sources excluding hydropower had climbed to 785 gigawatts by the end of 2015, after a record 120 gigawatts were added during the year. China, which hosts more than 25% of the world’s non-hydro renewable capacity, is the top country in absolute terms, followed by the United States and Germany. China and the United States both lag far behind Germany in per capita capacity. Including hydropower, renewables have a 24% share in world energy. 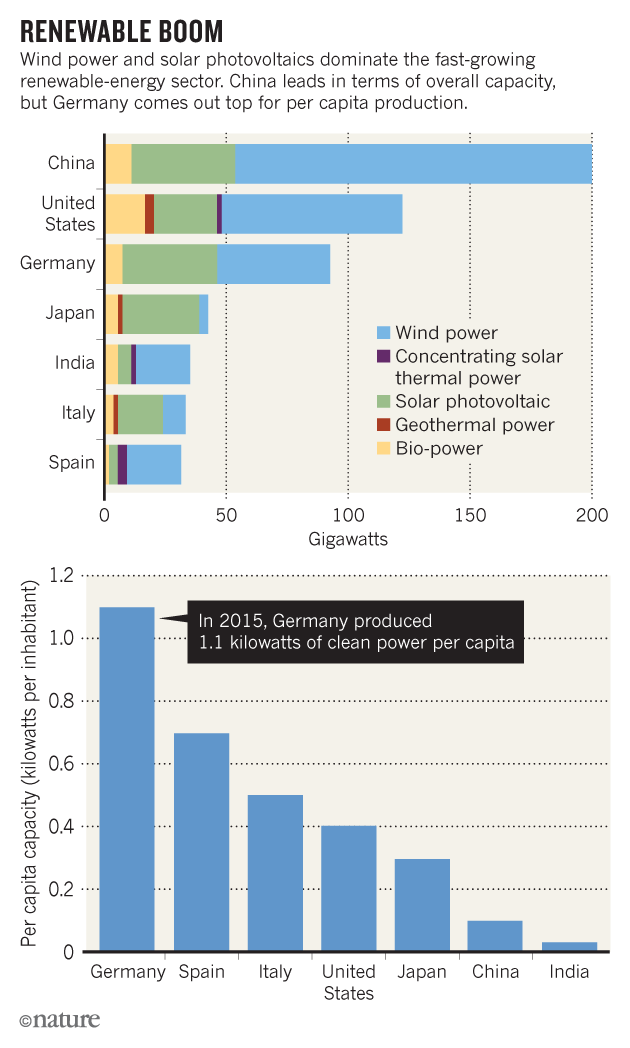 Seeking great mentors! For more than ten years, Nature has been recognizing outstanding scientific mentors around the world. This year’s awards for great mentors are focused on the US states of Washington, Oregon and California. Each prize is an award of US$10,000. For details of the competition and guidance about nominating candidates for lifetime and mid-career awards, see www.nature.com/nature/mentoringawards/uswestcoast. Nominations must be submitted by mentees of the nominees, and the closing date is 8 August 2016.