Emissions stall Humanity’s greenhouse-gas output increased by just 0.5% in 2014, despite significant global economic growth, according to figures released on 25 November. Carbon emissions rose by 3–4% per year in the first decade of the twenty-first century, but that growth has slowed dramatically over the past 3 years, report the Netherlands Environmental Assessment Agency and the European Commission’s Joint Research Centre. The biggest factor is China, where slower economic growth and a shift towards cleaner energy sources and less energy-intensive manufacturing have reduced the energy intensity of the economy. See go.nature.com/kphlae for more.

Deforestation rises The rate of legal deforestation in the Amazon rainforest has risen over the past year, Brazilian environment minister Izabella Teixeira announced on 26 November. Satellite images show that 5,831 square kilometres of forest were lost to activities such as livestock farming and agriculture in the year up to July 2015, a 16% increase on the previous year. The increases were largest in the states of Rondônia, Mato Grosso and Amazonas. Of these, Mato Grosso had the biggest area of forest loss, at 1,508 square kilometres. Efforts by the Brazilian federal government have generally been bringing down rates of deforestation, and the current rate is around one-fifth of that in 2004. 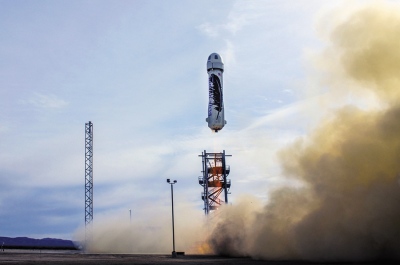 Blue Origin gets to space and back Commercial spaceflight company Blue Origin — the brainchild of Jeff Bezos, head of online retail giant Amazon — completed a test of its reusable rocket on 23 November. The autonomous vehicle was successfully landed after it propelled a capsule to a height of more than 100 kilometres, which is classed as being in space. The flight comes just seven months after one of the company’s rockets was destroyed during a similar test. Blue Origin has not yet completed a crewed flight; the capsule is designed to carry up to six passengers into space.

Anthrax vaccine An anthrax vaccine has become the first to be approved by the US Food and Drug Administration (FDA) under the ‘Animal Rule’, which allows approval on the basis of animal tests when studies in humans are not ethical or possible. The FDA announced on 23 November that the vaccine, called BioThrax, can be used after exposure to Bacillus anthracis, the bacterium that causes anthrax. BioThrax was initially approved in 1970 to prevent anthrax before exposure to the bacterium. The vaccine is made by Emergent BioDefense Operations Lansing in Michigan.

Retraction data A searchable database should soon allow systematic identification of retracted publications. Posts and article identifiers from the blog Retraction Watch will be incorporated into a web application maintained by Center for Open Science in Charlottesville, Virginia, that already tracks research activities such as posting preprints or depositing data sets. The resource will initially have about 5,000 entries, and was announced by both organizations on 24 November.

LHC heavy metal After spending five months colliding protons following a major upgrade this year, the Large Hadron Collider (LHC) near Geneva, Switzerland, began a one-month run of experiments with heavy ions on 25 November. All main detectors at the accelerator — including ALICE, which was designed for this purpose — are now studying the state of matter known as quark–gluon plasma, which can arise when two nuclei of lead-208 collide. In these collisions, the nuclei carry a record-breaking energy of more than 1 petaelectronvolt.

Energy partnership A group of 28 investors from 10 countries has launched a multibillion-dollar clean-energy research partnership. The Breakthrough Energy Coalition, spearheaded by Microsoft founder Bill Gates, and including Virgin founder Richard Branson and Amazon boss Jeff Bezos, was announced on 30 November, on the opening day of the international climate-change negotiations in Paris. The private partnership aims to support early-stage research into low-carbon technologies for future energy supply. It will complement energy-research efforts announced by US President Barack Obama and French President François Hollande on the same day, dubbed ‘Mission Innovation’. See go.nature.com/wzigmx for more.

Maurice Strong Maurice Strong, the founding head of the United Nations Environment Programme (UNEP) and a leading figure in climate-change politics, has died aged 86. He was a major figure in organizing the 1992 Rio Earth Summit and creating the UN Framework Convention on Climate Change. Strong is regarded as one of the most important people in the history of the environmental and sustainability movements. In a statement released by UNEP on 28 November, Achim Steiner, the current head of the agency, called him a visionary and a pioneer of global sustainable development. 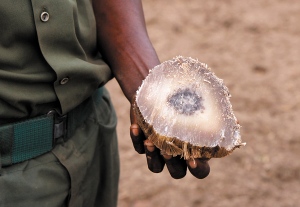 Rhino-horn ban A South African court has lifted a ban on the domestic trade in rhino horn (pictured) after two game farmers claimed that it infringed their right to trade in a renewable substance. On 26 November, the judge ruled that the ban, introduced in 2009, had not undergone proper public consultation. He added that since 2008 the number of South African rhinos poached for their horns has increased from less than 100 per year to around 1,200. Conservation group Save the Rhino asked how a national ban could fuel poaching, which mainly serves overseas markets, given that the international trade is illegal. The South African government is to appeal the ruling; the law will stay in place until the appeal has been heard.

Carbon plan canned On 25 November, the UK government scrapped a £1-billion (US$1.5-billion) competition to build a demonstration carbon capture and storage plant. Funding for the project — intended to demonstrate that carbon dioxide can be filtered out of power-plant exhaust gases on a commercial scale — has been on the table since 2012, but was removed from government plans in the latest five-year spending review.

Open-access policy The Netherlands Organisation for Scientific Research (NWO) is tightening its open-access policy to demand that research results become universally available as soon as authors publish them. NWO-funded researchers were previously obliged either to publish in an open-access journal or to submit a version of their work to a public database ‘as soon as possible’ after publishing in a pay-to-read journal. From 1 December, new grant conditions require Dutch researchers to make work immediately accessible. To avoid conflicting with journals that enforce embargo periods, such as Nature, researchers can submit pre-peer-review versions to a database.

Animal clones A huge animal-cloning centre in Tianjin, China, will open early in 2016. Launched with 200 million yuan (US$31.3 million) from Sinica, a subsidiary of BoyaLife in Wuxi, the Tianjin International Joint Academy of Biomedicine, Peking University in Beijing and Sooam Biotech in Seoul, the centre will clone cattle, dogs and racehorses. BoyaLife says that the aim is to produce one million cloned cow embryos annually to help Chinese farmers to meet demand for beef.

Italian expo The Italian government enacted a decree on 25 November that allocates €80 million (US$85 million) to launch a major research centre to focus on big-data exploitation in health and nutrition, as well as nanotechnologies. Called Human Technopole, the centre will take over part of the site used for the 2015 international exhibition called Milan Expo. It will continue the theme of the exhibition — ‘feeding the planet, energy for life’. Human Technopole will be led by the Genoa-based Italian Institute of Technology and will eventually employ more than 1,000 researchers. 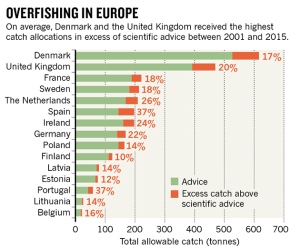 European politicians often allow more fish to be taken from the seas than is recommended by scientists. Yet this excess varies by country, according to a study (G. Carpenter et al. Mar. Policy 64, 9–15; 2016). In 2001, the total catch permitted in the European Union averaged 33% more than that advised by the International Council for the Exploration of the Sea. In 2015, this fell to 7% above the advised level. EU politicians negotiate catch limits in secret, but more transparency is needed, say the authors.

8–9 December
The Royal Society of Medicine and the Nutrition Society in London jointly host a meeting that will look at the role of sleep in obesity and nutrition.
go.nature.com/xigwne