Brexit fallout Scientists in the United Kingdom have continued to voice concerns about the impact of the country’s 23 June vote to leave the European Union, amid fears over access to EU funding and the employment rights of academics. High-profile figures including Paul Nurse, director of the Francis Crick Institute in London, have demanded that science be given a seat at the table during exit negotiations. An inquiry into the implications of the vote has been started by politicians from the House of Commons Science and Technology Committee. And science minister Jo Johnson attempted to reassure researchers in a speech in London on 30 June about ongoing plans to reform the country’s research-funding system. He noted that the United Kingdom is still open to all EU researchers. See go.nature.com/29v5m8n for more.

Ozone hole shows signs of healing The Antarctic ozone hole is on the mend, according to an analysis published on 30 June (S. Solomon et al. Science http://doi.org/bkn5; 2016). The hole — which opens in the stratosphere every Antarctic spring — has shrunk in its September extent (pictured) by an average of 4.5 million square kilometres since 2000. The work used balloon observations and climate models to confirm that ozone is recovering thanks to the 1987 Montreal Protocol, which banned ozone-depleting chlorofluorocarbon chemicals. Fingerprints of healing are most obvious in September, the month the hole begins to grow in earnest. An exception to the healing trend occurred in 2015, when a record hole opened because of a volcanic eruption in Chile. Sulfur particles from the event temporarily accelerated the ozone-destroying reactions. See go.nature.com/29ewicm for more. 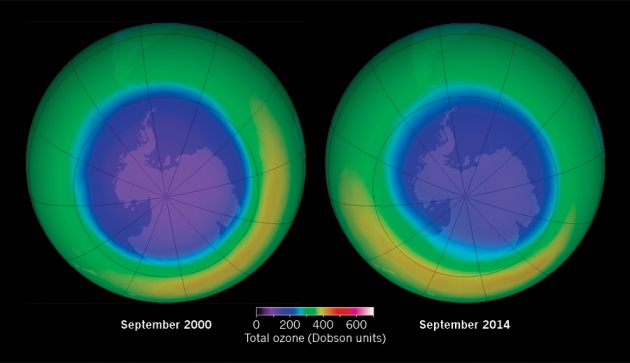 Laureates on GM More than 100 Nobel laureates have signed an open letter urging environmental group Greenpeace to stop campaigning against genetically modified (GM) organisms. “Opposition based on emotion and dogma contradicted by data must be stopped,” they say. The 29 June letter cites, in particular, campaigns against the vitamin-A-enriched ‘golden rice’, which the laureates say could reduce disease-causing deficiencies of the nutrient. Greenpeace responded on 30 June, saying that golden rice had failed as a solution and suggesting that malnutrition should be addressed through “diverse diet, equitable access to food and eco-agriculture”.

Chemist killed An ‘anarcho-primitivist’ group has claimed responsibility for the killing of José Jaime Barrera Moreno, a chemist at the National Autonomous University of Mexico (UNAM) who was stabbed to death at the university in Mexico City on 27 June. In a message posted online on 29 June, a group calling itself Individuals Tending Towards Savagery (ITS) says that it carried out the attack. ITS is an alliance of eco-extremist groups that also claimed the 2011 shooting of another UNAM scientist, biotechnologist Ernesto Méndez Salinas. The group has repeatedly attacked scientists and technologists, whom it blames for destroying nature.

EU trawling ban A deal has been struck to limit deep-sea trawling in European Union waters, ending a long-running battle between non-governmental organizations, researchers, politicians and the fishing industry. On 30 June, ministers and Members of the European Parliament announced that all trawling below 800 metres will be banned, and fishing for deep-sea species above this depth will be permitted only in areas where it took place between 2009 and 2011. Conservation groups such as BLOOM in Paris and some scientists have long argued that deep-sea trawling destroys sensitive marine ecosystems that may take years to recover, if they recover at all.

Pesticide ruling The European Commission has extended authorization of the use of the weedkiller glyphosate in the European Union for up to 18 months. The 29 June decision, which is pending completion of a risk assessment by the European Chemicals Agency, came a day before the previous authorization was due to expire. It followed the failure of EU member states to agree, with the necessary qualified majority, on whether glyphosate should be approved for a further 15 years — or banned. Critics fear that the chemical causes cancer, but many experts say that it is safe.

Clean-energy plan North America is to get half of its electricity supply from non-fossil fuels and renewable energy sources by 2025, the leaders of Canada, the United States and Mexico pledged at a meeting last week in Ottawa. In their 29 June statement on a North American Climate, Clean Energy, and Environment Partnership, Canadian Prime Minister Justin Trudeau, US President Barack Obama and Mexican President Enrique Peña Nieto also agreed to reduce methane emissions, improve energy efficiency and advance carbon capture and storage technology in their countries.

Animal use ends Medical schools in the United States and Canada have ceased using live animals to teach students. The University of Tennessee College of Medicine in Chattanooga was the last US medical school that still used animals for this purpose, and on 26 June, the university told the Physicians Committee for Responsible Medicine (PCRM) that it was ending the practice. According to the PCRM, medical schools believe that simulators provide better education as they are based on the human body.

Juno finds Jupiter NASA’s Juno spacecraft slipped into orbit around Jupiter on 5 July, becoming the first craft to visit the giant planet since the Galileo mission arrived in 1995. The probe (artist’s impression, pictured) fired its main engine flawlessly in a 35-minute burn that sent it looping around the planet into a 53.5-day orbit; later this period will be reduced to 14 days. The US$1.1-billion project aims to explore basic questions such as what Jupiter is made of and whether it has a core. See go.nature.com/29icaol for more. 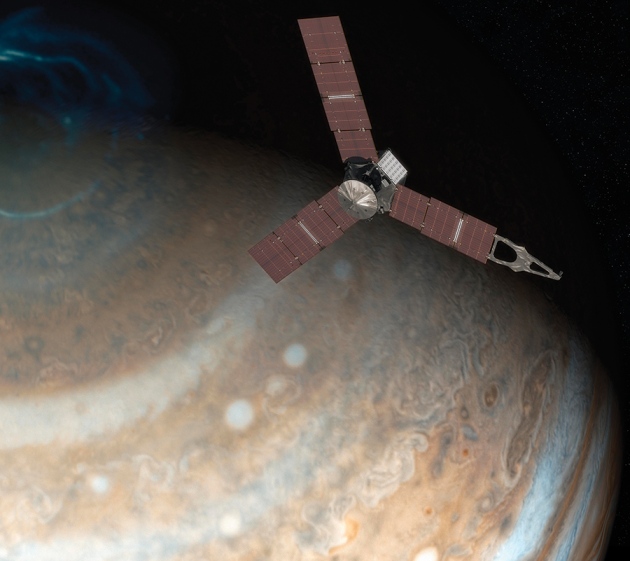 Dawn stays put On 1 July, NASA turned down a request to send its Dawn spacecraft, currently orbiting the asteroid Ceres, to another destination. Team leaders had wanted to send the mission, which has been at Ceres since March 2015, to the asteroid Adeona. NASA instead opted to keep Dawn where it is, to study Ceres as it gets closer to the Sun. The agency approved mission extensions for all of the planetary spacecraft that it was considering them for, including New Horizons, which after a successful visit to Pluto last year is now on its way to 2014 MU69, an object in the Kuiper belt. It is expected to fly past the icy world in January 2019.

Rosetta’s final move The Rosetta spacecraft will crash land on comet 67P/Churyumov–Gerasimenko on 30 September, two years after reaching it, the European Space Agency announced on 30 June. In August, engineers will put Rosetta in a series of flattening elliptical orbits, ahead of a final manoeuvre 12 hours before impact. In its final descent, Rosetta will get its closest look yet at the comet. Despite a relatively soft landing, at a speed of 50 centimetres per second, the impact will bring the mission to a close: Rosetta’s transmitter will be switched off and its antenna will no longer be able to point to Earth.

Harassment case Michael Katze, a virologist known for his research on Ebola at the University of Washington in Seattle, has been suspended from his lab following violations of sexual-harassment policy. In a 29 June statement, the university said that it is discussing disciplinary measures. The university’s two investigations found that Katze routinely made inappropriate comments to female employees and had a quid-pro-quo sexual relationship with a lab worker. The university also determined that Katze misused public resources by instructing his employees to perform personal chores for him, including soliciting sexual partners for him online.

Volkswagen to pay Volkswagen has made a US$14.7-billion settlement with regulators in the United States over its manipulation of emissions tests for the diesel engines used in almost half a million cars on US roads. The world’s biggest carmaker announced on 28 June that it would set aside $10 billion to buy back or terminate the leases on affected Volkswagen and Audi models made from 2009 to 2015, or to modify the vehicles to reduce their emissions. It agreed to spend $2.7 billion on cleaning up environmental pollution and to invest an extra $2 billion in clean car technology in the United States over the next 10 years.

Hundreds of clinics in the United States are offering unapproved stem-cell treatments for a range of medical conditions. A rigorous search and analysis of Internet advertising, published on 30 June, found that 351 US businesses were marketing such treatments at 570 clinics for conditions including pain and autism (L. Turner and P. Knoepfler Cell Stem Cell http://doi.org/bkpv; 2016). Most clinics offered treatments with stem cells derived from the patient; other sources for the cells included amniotic and placental material. 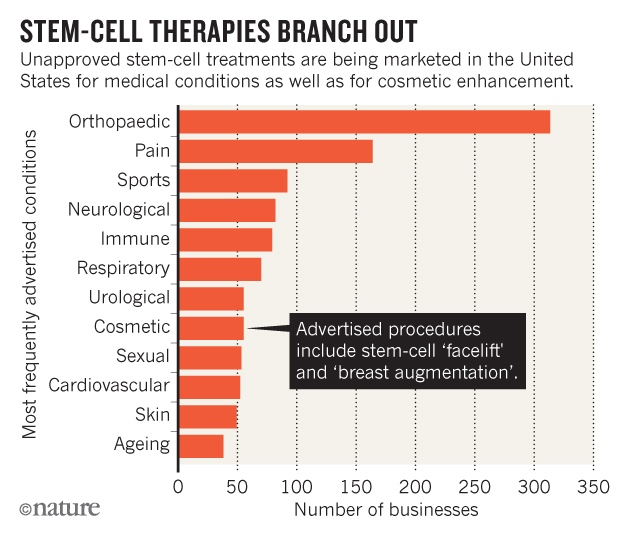