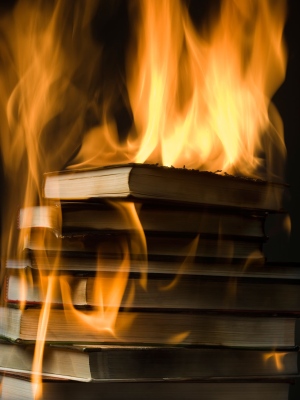 Even if you're not burning books, destroying information generates heat.

Forgetting always takes a little energy. Eric Lutz at the University of Augsburg, Germany and his colleagues have found experimental proof of exactly how little. They present their result in Nature today1.

In 1961, physicist Rolf Landauer argued that to reset one bit of information — say, to set a binary digit to zero in a computer memory regardless of whether it is initially 1 or 0 — must release a certain minimum amount of heat, proportional to the ambient temperature.

“Erasing information compresses two states into one,” explains Lutz, who is now at the Free University of Berlin. “It is this compression that leads to heat dissipation.”

His work now seems to confirm that Landauer’s theory was right. “Landauer's principle has been kicked about by theorists for half a century, but to the best of my knowledge this paper describes the first experimental illustration of it,” says Christopher Jarzynski, a chemical physicist at the University of Maryland in College Park.

To test the principle, the researchers created a simple two-state bit: a single microscopic silica bead held in a ‘light trap’ by a laser beam. The trap contains two ‘valleys’ where the particle can rest, one representing a 1 and the other a 0. It could jump between the two if the energy ‘hill’ separating them is not too high.

The researchers could control this height by changing the power of the laser, and could ‘tilt’ the two valleys to tip the bead into one of them by moving the physical cell containing the bead slightly out of the laser’s focus.

By monitoring the position and speed of the particle during a cycle of switching and resetting the bit, they could calculate how much energy was dissipated. Landauer’s limit applies only when the resetting is done infinitely slowly, and Lutz and colleagues found that, as they used longer switching cycles, the dissipation got smaller, heading towards a plateau equal to the amount predicted by Landauer.

The results safeguard one of the most cherished principles of physical science: the second law of thermodynamics. This law states that heat will always move from hot to cold, or equivalently, that entropy — the amount of disorder in the Universe — always increases.

In the nineteenth century, the Scottish scientist James Clerk Maxwell proposed a scenario that seemed to violate this law. In a gas, hot molecules move faster than cold ones. Maxwell imagined a microscopic intelligent being, later dubbed a 'demon', that would open and shut a trapdoor between two compartments to selectively trap hot molecules in one of them and cool ones in the other, defying the tendency for heat to spread out and entropy to increase.

Landauer’s theory offered the first compelling reason why Maxwell’s demon couldn’t do its job. The demon would need to erase (‘forget’) the information it used to select the molecules after each operation, and this would release heat and increase entropy, more than counterbalancing the entropy lost by the demon.

In 2010, physicists in Japan showed that information can indeed be converted to energy by selectively exploiting random thermal fluctuations, just as Maxwell’s demon uses its ‘knowledge’ of molecular motions to build up a reservoir of heat2 (see Demonic device converts information to energy). But Jarzynski points out that the work also demonstrated that selectivity requires the information about fluctuations to be stored.

He says that Lutz’s experiment now completes the argument against using Maxwell’s demon to violate the second law of thermodynamics, because it shows that “the eventual erasure of this stored information carries a thermodynamic penalty”.

More practically, Landauer’s principle implies a limit on how low the energy dissipation — and thus consumption — of a computer can be. “Heat dissipation in computer chips is one of the major problems hindering their miniaturization,” says Lutz.

This energy consumption is getting ever lower, and Lutz says it’ll be approaching the Landauer limit within the next couple of decades. “Our experiment clearly shows that you cannot go below Landauer’s limit,” says Lutz. “Engineers will soon have to face that.”

Meanwhile, in fledgling quantum computers, which exploit the rules of quantum physics to achieve greater processing power, this limitation is already being confronted. “Logic processing in quantum computers already is well within the Landauer regime,” says physicist Seth Lloyd of the Massachusetts Institute of Technology in Cambridge. “One has to worry about Landauer's principle all the time.”