Scientists at the Laser Interferometer Gravitational-Wave Observatory (LIGO) announced on 11 February that they have detected gravitational waves: ripples in space-time that Albert Einstein predicted a century ago. LIGO, which is US-led, has sites in Hanford, Washington and Livingston, Louisiana. Nature takes a pictorial look at the quest to track down of one of the most elusive quarries in physics. 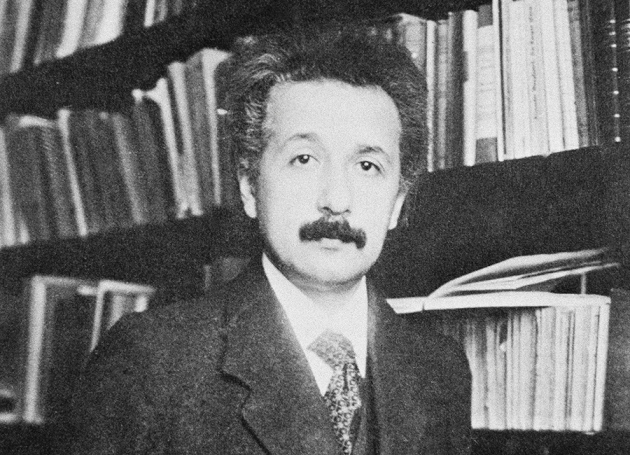 After formulating his general theory of relativity, which holds that gravity is a distortion in space and time around massive objects, Albert Einstein (pictured) pondered what would happen when a mass is shaken. His answer, published a year after the theory, was that space-time would ripple and produce ‘gravitational waves’ moving outward from the mass at the speed of light1. He and other physicists immediately began arguing about whether the predicted waves were real, or just artefacts of the new mathematics involved. Einstein himself changed his mind several times. 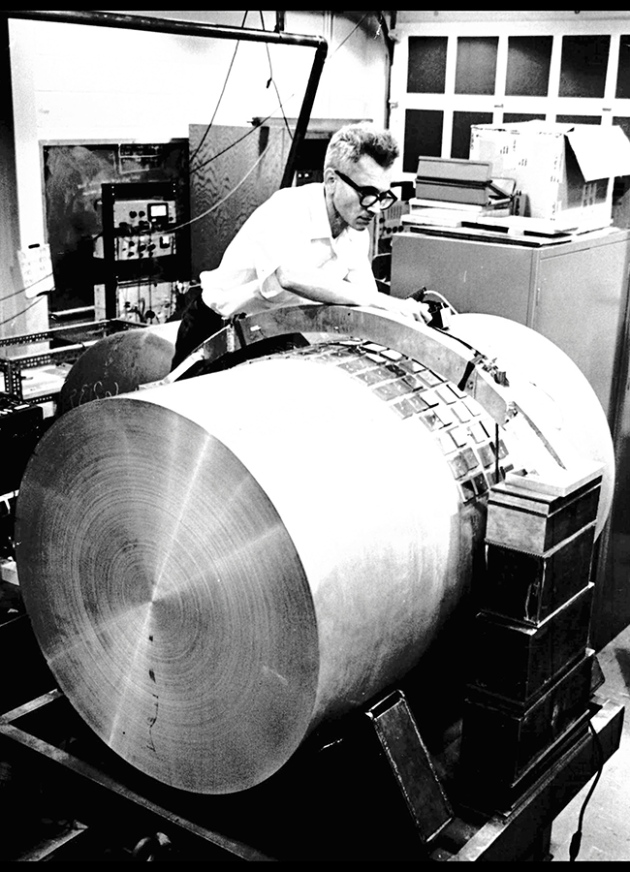 Joseph Weber (pictured), a physicist at the University of Maryland in College Park, believed that gravitational waves were real. In 1969, he announced that he had found them with a detector of his own invention: an aluminium cylinder, about 2 metres long and 1 metre in diameter, that ‘rang’ when it was struck by such a wave2. His result was never replicated, and was eventually rejected by nearly everyone except Weber himself. Nonetheless, his work drew many other researchers into the gravitational wave field. 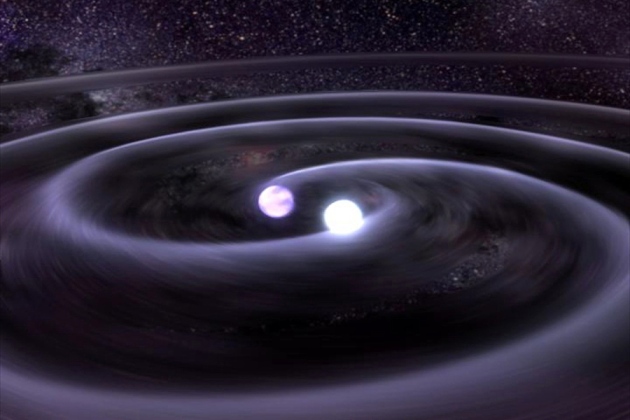 A more widely believed finding came from Joseph Taylor and his graduate student Russell Hulse. Working at the University of Massachusetts Amherst, they discovered3 the first known binary pulsar, dubbed PSR B1913+16 (artist's impression, pictured), in 1974. It consisted of two neutron stars whipping around one another in a close orbit, and also spiralling inwards at exactly the rate predicted by Einstein’s theory — if gravitational waves were carrying away their energy. Viewed as an indirect observation of gravitational waves, the find won Hulse and Taylor the 1993 Nobel Prize in Physics, with the citation: “for the discovery of a new type of pulsar, a discovery that has opened up new possibilities for the study of gravitation”. 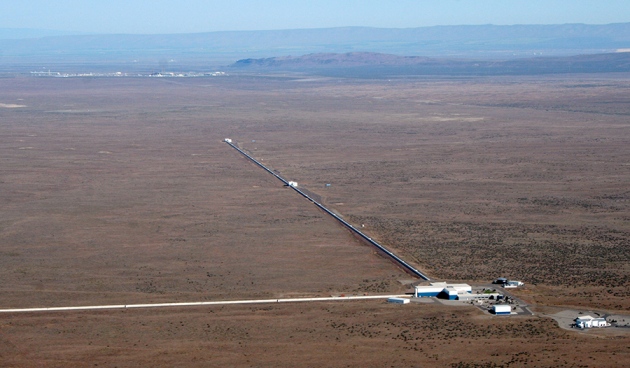 When scientists at the Massachusetts Institute of Technology and the California Institute of Technology submitted plans for huge detectors to find gravitational waves using a technique known as laser interferometry, many researchers were strongly opposed to the project. They feared that it would divert huge amounts of money from other research and — moreover — never find anything. But the US National Science Foundation (NSF) approved the construction of LIGO in 1990, and in 1992 selected sites for the experiment’s twin detectors: Hanford, Washington (pictured), and Livingston, Louisiana. The facilities were completed in 1999 and started collecting data in 2001. In 2010, the detectors were shut down for upgrades, having found nothing. 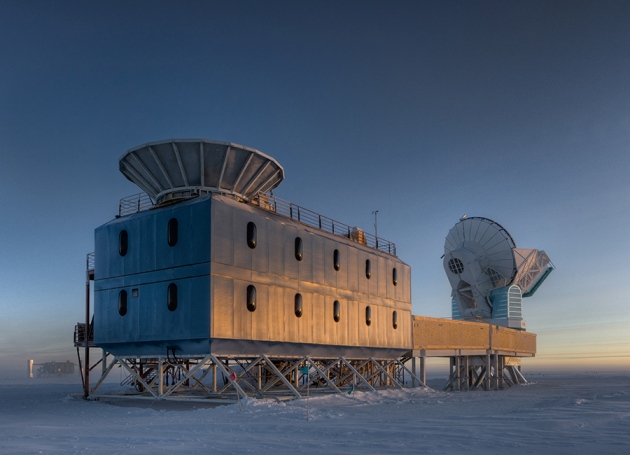 In 2014, a different type of evidence for gravitational waves was claimed, by the collaboration behind a South Pole-based instrument called BICEP2 (facility, pictured). The BICEP2 researchers said that they had found ‘B modes’ — subtle microwave signals that they believed to be produced by ‘primordial’ gravitational waves generated by the Big Bang. But their analysis was subsequently revealed to be a mistake: the signal was the result of interstellar dust particles in our own Galaxy. 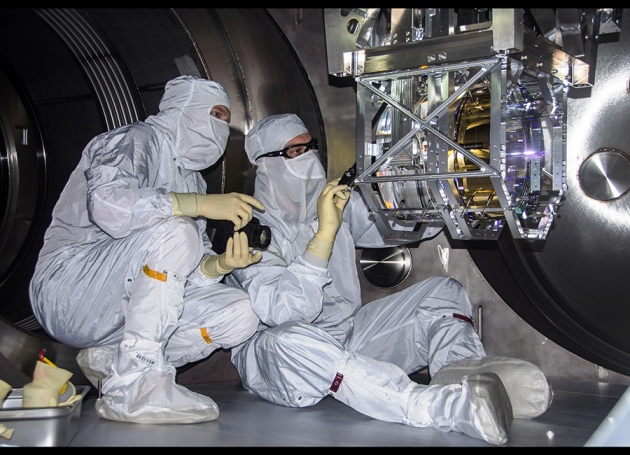 A hugely upgraded LIGO began its first observing run last September, with the ability to search for gravitational waves in a much greater volume of space than its predecessor could. Advanced LIGO finished its first period of operation in January 2016. (Pictured: an inspection at the Livingston detector.) 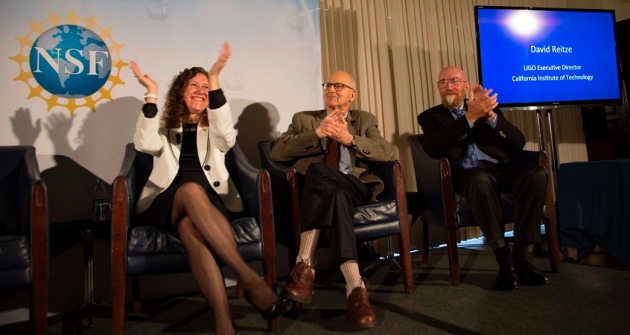 At a packed press conference in Washington DC (pictured, Gabriela Gonzalez, Rainer Weiss and Kip Thorne) on 11 February, scientists from the LIGO team announced that they had made the first direct detection of gravitational waves.