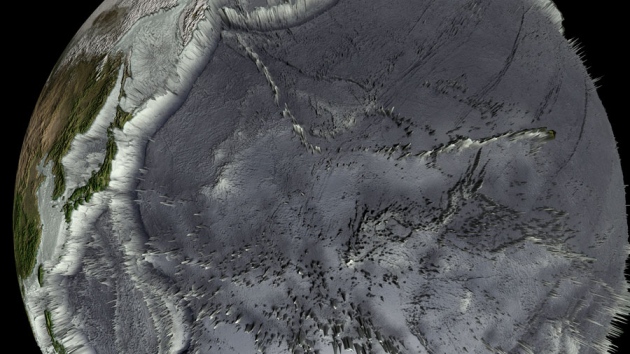 A computer model simulates the seafloor in the North Pacific.

The Pacific Ocean was born from a geological spasm that started 190 million years ago, when Earth’s crust ripped apart and fresh lava welled up from below. Now, a new analysis suggests that this seafloor birth was a lot more complex than researchers had thought.

The study is a rare step forward in understanding the origin of the Pacific, one of geology’s most enduring mysteries.

“This is one big piece of the puzzle that we’ve now put into place,” says Lydian Boschman, a geologist at Utrecht University in the Netherlands. She and her colleague Douwe van Hinsbergen report the discovery on 27 July in Science Advances1.

Oceans are born at unstable seams in Earth’s crust, where plates pull apart, allowing molten rock to fill the gap and solidify. The fresh crust pushes older crust away from the seam and towards the edge of a continent. Eventually, the ocean crust crashes into continental crust and, through the process of plate tectonics, gets sucked down and recycled deep within the planet.

Because of this continuing cycle of creation and destruction, no seafloor is older than about 200 million years. To see how oceans behaved further back in time, geologists must try to reconstruct the three-dimensional geometry of long-vanished crustal plates.

Boschman and van Hinsbergen studied the oldest part of the Pacific plate, which lies just east of the Mariana Trench. Previous work suggested that the Pacific was born in what’s known as a geological triple junction, with fresh seafloor spreading outward from each of three intersecting ridges. But that configuration is geologically stable; in the south Atlantic Ocean, a similar triple junction has endured for more than 100 million years without forming a new plate. “There’s no reason to,” says Boschman.

Instead, she says, the Pacific must have been born at an unstable type of triple junction. The three intersecting seams would have had to have been transform faults, in which the two sides of a fault slide past one another. California’s San Andreas fault moves in this fashion.

The work shows how basic thinking about plate tectonics can still yield surprises, says Bernhard Steinberger, a geophysicist at the GFZ German Research Centre for Geosciences in Potsdam, Germany. “This is one of those rare cases where a discovery could be made simply by an elegant thought,” he says.

Boschman would like to push even further back in time, to unravel the history of the ocean that preceded the Pacific and surrounded the supercontinent Pangaea. She is currently doing fieldwork in Costa Rica, looking for evidence of ancient seafloor rocks scraped up on the side of the continent as the ocean crust was dragged under and destroyed.