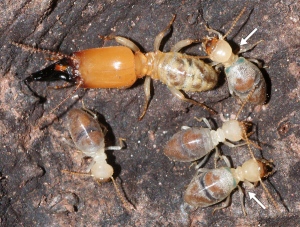 Older worker termites of Neocapritermes taracua (top right and bottom right) develop blue pouches that can explode to harm their enemies. The yellow-headed termite is a soldier.

A species of termite found in the rainforests of French Guiana takes altruism seriously: aged workers grow sacks of toxic blue liquid that they explode onto their enemies in an act of suicidal self-sacrifice to help their colonies (see video).

The “explosive backpacks” of Neocapritermes taracua, described in Science today1, grow throughout the lifetimes of the worker termites, filling with blue crystals secreted by a pair of glands on the insects' abdomens. Older workers carry the largest and most toxic backpacks. Those individuals also, not coincidentally, are the least able to forage and tend for the colony: their mandibles become dull and worn as the termites age, because they cannot be sharpened by moulting.

“Older individuals are not as effective at foraging and nest maintenance as younger workers,” says Robert Hanus, who studies termite biology at the Institute of Organic Chemistry and Biochemistry in Prague, and led the study.

But when the workers are attacked, he says, “they can provide another service to the colony. It makes perfect sense to me because theories predict that social insects should perform low-risk, laborious tasks such as housekeeping in the first part of their life and risky tasks such as defence as they age.”

Self-destructive behaviour is common among the sterile worker castes of eusocial insects such as termites and honeybees. The workers forego reproduction, so they are free to evolve altruistic behaviours that benefit the colony as a whole rather than themselves as individuals. Defensive suicidal rupturing — termed autothysis — has evolved independently in a number of termite species, suggesting that the behaviour is highly adaptive.

Looking at defence mechanisms in other species of termite shows how the explosive backpacks might have evolved, says Hanus. Many termites fight off enemies by simply defecating onto them, sometimes with remarkable accuracy from a distance.

Other species go a step further, by actively squeezing their own abdominal muscles until a specialized thin portion of abdominal wall explodes showering the enemy with excrement. In the next stage of suicidal rupturing, some species of termites produce a toxic chemical that showers the enemy when the abdomen ruptures.

N. taracua has added a yet another step, by using a reaction to make its defensive chemical even more toxic. The pouches holding the copper-containing blue crystals are located near to the salivary glands. When the termites are attacked, their enemies bites cause these swollen pouches burst and the crystals mix with salivary secretions, producing the toxic blue liquid.

“It is the two-component chemistry that underlies the exceptional toxicity in this species,” says Hanus.

“The sophistication of this is remarkable: we have never seen an external pouch like this before that adds one substance that needs to be mixed with another substance,” says Olav Rueppell, an evolutionary biologist from the University of North Carolina Greensboro, who studies social evolution in honeybees. “This kind of adaptation would not evolve in a solitary context; this shows the power of eusociality, and why these insects are so successful.”